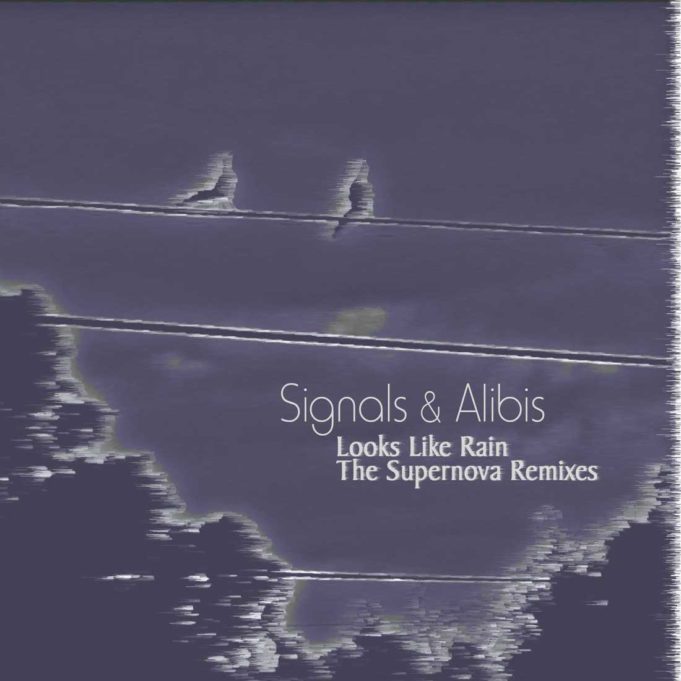 Signals and Alibis formed as a four-piece seven years ago. In the intervening years, the band sort of dissolved but only to reform as a duo composed of vocalist/keyboardist Rebecca Jozwiak and guitarist Brian Carter. Due to the circumstances of adulthood, the duo has mostly remained a local band that has made occasional forays outside of Texas to places like Oklahoma, Arkansas, and St. Louis, Mo., as well as some trips down to Austin. While the co-songwriters’ aspirations of “making it” might stay closer to home than other bands, Carter and Jozwiak still enjoy writing and performing. Last July, they released Looks Like Rain, a five-song EP of moody, down-tempo, shoegaze-influenced synth pop, a hazy, electronic dreamscape of the sorts conjured up by PJ Harvey or Massive Attack.

This past week, they re-released Looks Like Rain in dramatically altered form. Put out by Dreamy Life Records, Looks Like Rain has been reborn and expanded into a seven-track record called The Supernova Remixes.

“Originally, the idea was one remix of each song, but a couple of people did the same song,” Carter said.

Looks Like Rain’s tracks were reinterpreted by a who’s who of Dallas’ and Fort Worth’s synthwave/electronic scenes: Pleasure Crisis’ Caleb Ditzenberger adds industrial paranoia to “Black Mold,” Dean Garcia’s take on “Monstrous Whore” is menacing sturm und drang, Little Science’s version of “I’ll Stay” would be at home in a go-go bar straight out of Blade Runner; while “Whistleblower,” re-imagined by DJ Culturegang, adds pulsing urgency. “Black Mold” gets a second remix courtesy of Joshua Beene, who makes the track woozy, vaporous, and bass-heavy. Wire Nest’s treatment of “The New (Again)” is deliciously, ominously spare, and St. Louis’ CaveofSwordS chops up “Mesh Unto Sorrow” into a glitchy, ambient fever dream, the kind of nightmare an android might have if it powered down while contemplating what it means to sleep.

For Carter and Jozwiak, getting Dean Garcia, one-half of legendary London-based electronica duo Curve, to remix a song was a dream come true, and came as a result of Carter’s persistent attempts to get in touch with him.

“We reached out to the band, and it took a couple times, but we were blown away when he agreed to it,” Carter said.

To put it in perspective, it’s sort of an amateur tennis player messaging John McEnroe for some pointers and seeing the legend turn up to play a round of doubles.

“It’s called ‘The Tear Mix,’ ” Jozwiak said. “He discarded most of the song except the vocals. It’s really cool.”

Jozwiak said that most of the remixes were almost complete reinventions of the existing songs.

“I almost like listening to this remix CD more than the originals,” she said. “It’s such a departure. Everyone did such a great job inserting themselves.”

The duo plans on doing the original album versions of the songs at live shows – Signals and Alibis’ next one is Fri, Sep 8 at Division Brewery in Arlington. But during their Fri, Sep 29, show at Lola’s Saloon with Programme and Pleasure Crisis, Brand will join the duo to recreate his version of “Whistleblower.”

Signals and Alibis are in the process of writing new music, though they aren’t quite sure what direction they’ll take.

“We would love to do a whole 10-song CD of shoegaze, and another one that’s industrial, and another that’s more folk,” Jozwiak said. “But we’re gonna figure out what fits best from all of those influences.”