I parcel out my TV viewing hours carefully, since, as this paper’s film critic, I spend so much of my time on movies. We may be in Peak TV, but I don’t seem to fall for shows like I used to. I still have the capability, though, because I’m breathless with excitement for this Friday’s Season 3 premiere of Crazy Ex-Girlfriend, a show on the CW that has my inner comedy nerd singing and my musical-theater nerd rolling on the floor. You’re welcome to The Walking Dead and Stranger Things when they come back this month, but this musical is the most brilliant, innovative, and adventurous TV show I’ve seen in years.

The story opened with Rebecca Bunch (Rachel Bloom) happening to meet Josh Chan (Vincent Rodriguez III), the Filipino-American boy whom she dated briefly as a teenager. Seeing how happy he looked, Rebecca threw over her job as a Wall Street lawyer to move to Josh’s hometown of West Covina, Calif., to pursue him and a storybook romance that existed only in her head. She wound up pinballing between the sweetly dim Josh and his buddy Greg (Santino Fontana), who set himself up as the nice guy waiting for her to get over her fixation, only to be later revealed as angry, cripplingly insecure, and an alcoholic. Meanwhile, the narcissistic, deluded Rebecca was egged on by Paula (Donna Lynne Champlin), her best friend and co-worker craving drama in her own life. “I can’t be held responsible for my actions!” Rebecca sang in the Season 2 theme song, a lyric that came back to majorly bite her ass in that season’s finale, which revealed her to be clinically unwell in ways that had nothing to do with her habit of hallucinating musical numbers. As the new season begins, Josh has left Rebecca stranded at the altar to impulsively join the priesthood, and she wants revenge.

Besides being the show’s star, Bloom is also its co-creator, writes many of its episodes, and co-writes all its original songs (mostly with longtime collaborator Jack Dolgen and Fountains of Wayne’s Adam Schlesinger). She started out training to be a conventional Broadway performer but then started taking improv comedy classes after a few auditions against rooms full of women who were taller and thinner than she was. Combining her interests with her filthy sense of humor, she put some comedy music videos online (like the eye-catchingly titled “Fuck Me, Ray Bradbury”), which led to her teaming with The Devil Wears Prada screenwriter Aline Brosh McKenna to create Crazy Ex-Girlfriend. In the same way that Orphan Black made you marvel at its lead actress’ ability to disappear into different roles within each episode, this program leaves you awestruck at Bloom’s creative imprint in so many areas. As much as she does behind the scenes, her musical theater training puts her in good stead in front of the camera, as she’s a lithe and technically keen dancer who sings in an incisive mezzo.

The most noticeable thing about the songs is the dizzying array of musical genres that they parody. Some of the targets are fairly easy — Irish drinking songs, Disney princess ballads, “Trapped in the Closet” — but Bloom has credited Schlesinger in particular with exploring styles she wouldn’t think of to keep the sound of the show fresh. Thus, Rebecca’s fantasy of getting Josh to admire her table-tennis prowess becomes a scarily precise imitation of ’90s frat-boy rock (“Ping Pong Girl”), and her excitement over her impending wedding is conveyed through a burst of death metal that’s so inappropriate that it’s perfect (“What a Rush to Be a Bride”). Greg’s Emmy-nominated jazz song “Settle for Me” has the elegance of an Astaire-Rogers number, complete with tap dance break, and its champagne-dry insouciance only makes its self-emasculating lyrics funnier.

More than just mimicry goes on here, too. The show is sharpest when these songs take aim at the cultural assumptions underlying their targets. When five teenage girls sing “Put Yourself First” to Rebecca (a spoof of Fifth Harmony’s “Bo$$”), their girl-power rhetoric rings hollow because all their empowering advice is aimed at making themselves more attractive to men. “Feeling Kinda Naughty” mocks the “I’m bi-curious, and that’s hot” songs of Demi Lovato and Katy Perry by taking the sentiment to disturbing extremes. (“I wanna kill you and wear your skin like a dress / But then also have you see me in the dress / And be like ‘OMG! You look so cute in my skin!’ ”) One way the show gets its feminist message across is by having it fall apart whenever it’s expressed too baldly, the better to examine what’s inside.

For all this, the show can be surprisingly powerful when it does go straight, as in a quiet nonmusical scene by a duck pond where Greg first talks to Rebecca after realizing that he needs help. A couple of episodes later, Greg sees how toxic he and Rebecca are together and leaves town to pursue his long-delayed college dreams, summing up their relationship in a moving song entitled “It Was a Shit Show” (or “S*** Show,” since the network bleeped out the obscenity for broadcast). A running gag with Rebecca’s middle-aged, awkwardly bisexual boss (Pete Gardner) trying to become Paula’s best friend culminates in a sadly resigned ukulele-accompanied song called “You’re My Best Friend (And I Know I’m Not Yours)”. Late in Season 2, Rebecca reaches a breaking point and sings “(Tell Me I’m Okay) Patrick” to a package delivery guy whom she barely knows (Seth Green), and you can hear her terror as she fleetingly comprehends how messed-up she is and begs this stranger for assurance. It’s a genuine rip-your-heart-out moment that any Broadway songwriter could be proud of. The musical numbers in this woman’s head may be fun, but actually being her is the furthest thing from it. It’s all unbearably sad. It also has a delivery package playing the piano by itself.

There’s so much else to admire here, like how deep the supporting cast’s musical talent runs (necessarily, since tertiary characters sometimes get their own number), or how deftly an abortion subplot got worked into the second season, or how Josh is one of the few Asian-American TV characters who’s not a geek, or how Bloom herself is willing to nerd out for the laugh with an avalanche of geometry puns (“The Math of Love Triangles”) or make fun of her own big breasts in a hip-hop number choreographed for maximum jiggle (“Heavy Boobs”). The hilarity of her songwriting puts her in the tradition of America’s great musical satirists: Tom Lehrer, Weird Al Yankovic, and The Lonely Island. Vitally, she’s the only woman in that group, and while you could imagine The Lonely Island parodying hookup culture in a song, you couldn’t imagine them writing “Kiss me, baby, all over the place / I really hope you’re not a murderer,” as Bloom does in “Sex With a Stranger.” It takes a woman to comprehend what that song does.

Even better, the show’s sneakily nuanced portrayal of mental illness makes it an unlikely cousin to Homeland (and wouldn’t that show be more fun with musical numbers?), while its ability to make us sympathize with an exasperating main character who makes one bad decision after another makes it better than the far-more-discussed Girls. The chipper surfaces, girliness, and outright silliness of Crazy Ex-Girlfriend have meant that it’s not taken seriously by some, but underneath all that, it’s as substantive as any prestige TV show 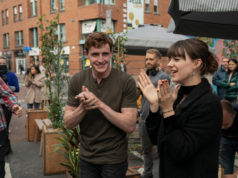