Home Film Film Reviews All the Real Girls
SHARE
Facebook
Twitter
My expectations were modest going into The Devil Wears Prada. The film is based on Lauren Weisberger’s dishy 2003 novel, which became a best-seller because of its supposed portrayal of legendary Vogue editor Anna Wintour, for whom the author had once worked. I went into the film expecting something potentially bitchy and fun. I didn’t expect one of the best movies I’ve seen so far this year. Lucky me, though. I got both. 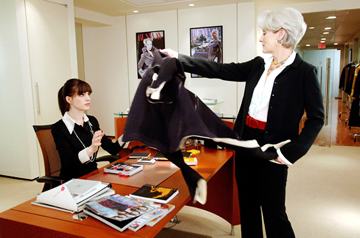 Anne Hathaway plays Andrea Sachs, a bright-eyed Northwestern U. graduate who has no interest in fashion yet lands a coveted entry-level job at a fashion magazine called Runway, seeing it as a first step into the high-powered world of New York journalism. She’s made second assistant to editor Miranda Priestly (Meryl Streep), whose very name makes her employees quake in their Manolo Blahniks and Jimmy Choos, and Andy is amused and horrified by the absurdly high hoops that she and first assistant Emily (Emily Blunt) are told to jump through. Coddled and corrupted by decades in power, the boss honestly can’t understand what’s so unreasonable about demanding the unpublished manuscript of the next Harry Potter book for her twin daughters to read, or why she can’t book a flight from Miami to New York just because there’s a hurricane.

Though the gossip factor in Weisberger’s book made it a must-read in fashion circles, it’s crap from a literary standpoint. A near-miraculous job of adaptation is pulled off by director David Frankel and screenwriter Aline Brosh McKenna, both with track records of eminently forgettable Hollywood comedies. They substitute snappy dialogue and sharp observations on workplace behavior for Weisberger’s schoolgirl prose and manic brand-dropping and evoke Runway’s trendier-than-thou office environment with punishing exactitude. You can just feel the waves of contempt from the black-clad, rail-thin fashionistas as they regard Andy’s blue department-store sweater and her selection of corn chowder when she’s lunching at the cafeteria. They all refer to Andy, with nary a flicker of irony, as “the fat girl.” (She’s a size 6, by the way.) The conception is as crisp as the editing here; the film never descends into sentimental soppiness, and the sequence involving the Harry Potter manuscript will make you feel like cheering.

Aside from Patricia Field’s dazzling haute-couture costumes, the real glory in this film is the acting. Streep’s performance makes for some delicious ham, repeatedly demonstrating how to completely dominate a room without ever raising her voice above a whisper. These dragon-lady roles have been her best work in recent years. (Check her out in The Manchurian Candidate from a couple years back.) Having murdered her own soul, Miranda is now out to kill everybody else’s, and Streep never apologizes for her character even when Miranda turns up in Andy’s hotel room late in the film and reveals what it has cost her to live the way she does. The pathos she evokes in this rather shocking scene makes her character more than just a cartoon.

For all the oxygen Streep uses here, it’s Hathaway who has the more challenging role, and she comes through with flying colors. This movie doesn’t work if you can’t understand why the smart, independent-minded, socially conscious Andy would fall so completely under Miranda’s spell. The saucer-eyed, teasingly funny Hathaway makes her character’s complex motivations ringingly clear, as the constant stream of condescension takes its toll on Andy’s psyche and makes her determined to live up to Miranda’s demands and succeed where her airheaded, clothing-obsessed predecessors failed. Andy drifts away from both her regular-Joe boyfriend (Adrian Grenier) and her earlier, more worthwhile career goals, and Hathaway is never less than convincing while it all happens. Hathaway’s acting isn’t pyrotechnic, but when you step back to consider everything she accomplishes, it’s pretty amazing. Andy’s predicament is illuminated further by yet another terrific performance, this one by Blunt as Emily. The first assistant is who Andy is in danger of becoming in the near future, and the English actress’ fierce, fidgety performance nails both the character’s monstrous pettiness and the deep reservoir of unhappiness underneath.

Photographed lovingly by Florian Ballhaus, this great-looking film is properly seductive, yet it winds up casting quite an unflattering gaze, presenting the world of high fashion as an insular and terminally shallow place where (as is frequently said of academics) the rivalries are so bitter because the stakes are so small. The Devil Wears Prada wins, as many other movies do, by having the best of both worlds. If you love fashion, you’ll lust after the clothes on display here. If you hate fashion, you’ll enjoy gawking at the rotten people wearing those clothes. Nowhere is this more apparent than in a scene late in the proceedings, when Miranda screws her doggedly loyal right-hand man Nigel (Stanley Tucci) out of his dream job, handing it to someone else as a way of preserving her own position. Applauding politely when the announcement is made, Nigel rationalizes to Andy, “She’ll pay me back one day.” Andy asks if he’s sure about that. His facial expression does not change as he says, “No.”