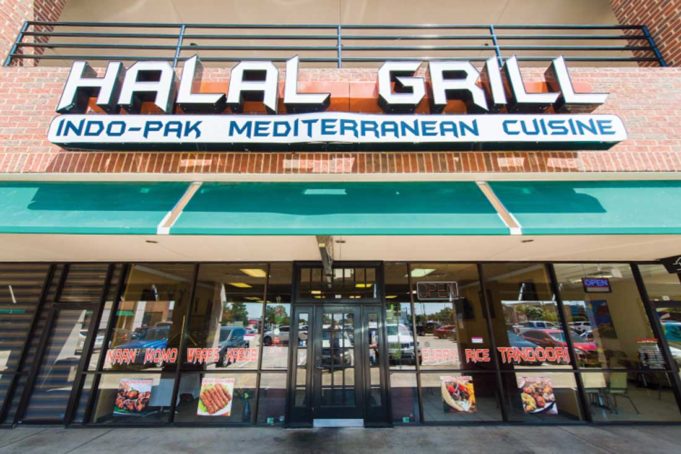 When was the last time you had beef at an Indian restaurant? Likely never, since the meat of cattle is famously taboo according to Hindu customs. However, as you might glean from its name, Halal Grill observes Muslim dietary laws rather than Hindu ones. Among other things, this means that while you can’t get pork or alcohol, beef is indeed an option at this establishment in a strip mall by the Parks Mall in Arlington. The restaurant opened this past spring serving Indian and Pakistani food but recently revamped its menu, getting rid of its lunch buffet in favor of Mediterranean fare such as wraps and salads (as well as lo mein noodles, weirdly enough). Whether they decided to accommodate Western tastes in order to survive, I don’t know. I do know that the old staples are still the best things they do.

The restaurant is small, with only about 20 seats, but it feels more spacious thanks to a plate glass storefront that faces Cooper Street and lets in a lot of natural light. (Also helping matters was the fact that the place was nearly empty each time I visited.) A TV off to the side played South Asian music videos, and handsome upholstered wooden chairs lent a touch of class to a functional interior. Where this place skimps is the beverage service — there isn’t a soda fountain or a pitcher of iced tea or even a water faucet in sight. To wash down your food, you’ll have to drink from plastic bottles stored in a refrigerator cabinet.

I have far fewer complaints about the food. During my initial visit, I found the spinach in the palak paneer puréed to an airy consistency, giving an uncommon delicacy to a dish that can be rough if the greens aren’t properly chopped. The kitchen pointed up the thick, vegetarian version of the Indian classic with just the right amount of spice. The main courses here don’t come with a starch, so you’ll have to order your bread or rice separately. I selected the butter naan and found it to be the real McCoy (the real Makhdoom?), a misshapen patchwork of bread blistered black by the tandoor oven and glistening with melted butter –– a far cry from those pillowy discs that you buy in the supermarket.

The aloo tikki wrap (served in an assuming plastic basket) was more of a mixed bag, with the spiced potato croquettes coming folded in the restaurant’s roti bread. For me, the cucumber and raita in the wrap obscured the flavor of those dainty hash brown-like nuggets inside. I would have preferred the aloo tikki by itself as an appetizer, which the restaurant gives you the option of ordering. Instead, my appetizer that day was an order of vegetable samosas, a handy if undistinguished starter that got upstaged by the minty chutney served alongside for dipping.

My server recommended the butter chicken as a dinner entrée, and the tried-and-true dish did not disappoint, the umami of the tomato in the sauce being bathed in a silky bath of butter.

The best dessert option I tried was the gulab jamun, the fried pastry that looks like an oversize donut hole but has a more cakelike consistency and is steeped in a chilled syrup of sugar and rosewater. You won’t go wrong with baklava in this restaurant (or, really, anywhere else), but the gulab jamun offers a better finishing note to the strong spices of the meal.

The expansive menu takes in goat biryani and momo (meat dumplings from Nepal). Fortunately, the price point at this modest eatery is low enough to be competitive with the chain eateries in the area and encourage you to come back. Whether you’re concerned with keeping halal or simply looking for reasonably priced Indian food in the area, the Halal Grill has you covered.