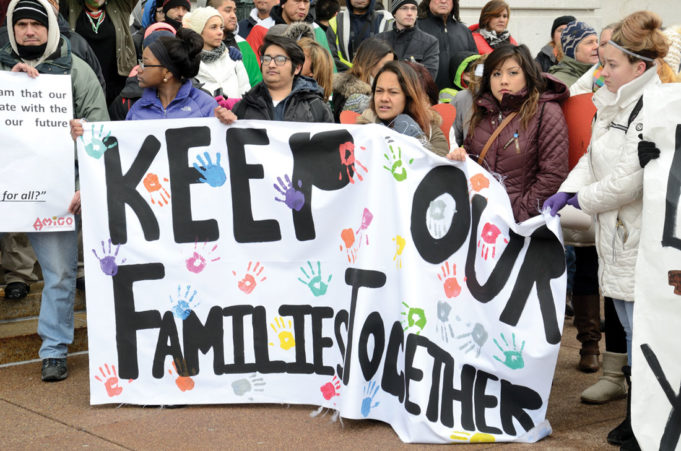 No, if Trump gets his immigration wish list, moms and dads, grandmas and grandpas who have been living here for decades, will face aggressive deportation measures. The restaurants in town will lose tons of cooks and chefs. The road building, construction, and roofing industries will be searching for warm bodies willing to work in the Texas summer heat with hot asphalt or roofing shingles. Homeowners who fled their birth countries over the last several decades and were never eligible for citizenship because they arrived without papers will be tossed to the deportation lines.

“I don’t think anyone knows how many illegal people are in Fort Worth, but there are a lot,” said Renny Rosas, a long-time Latino community activist. “They’re everywhere, and they are a part of this city, a part of our communities.”

Trump has already implemented or reversed several executive orders with regard to how immigrants are to be treated, even those seeking refugee status. His actions have caused fear to douse entire communities. Trepidation has overtaken people who once felt safe so long as they were productive and stayed out of trouble during the past several presidencies –– including a Republican president from a state who shared a border with Mexico.

But on Sunday, Oct 8, Trump released a 70-plus point policy paper that details all things immigration that he would like Congress to write into law. The paper is harrowing. While it covers Trump’s major immigration points like funding the Mexican border wall, adding 10,000 more Immigration and Customs Enforcement agents, and cutting certain federal funding to cities and municipalities that refuse to work with ICE on immigration issues — so-called sanctuary cities — the paper also covers new ground. It calls for a limit on the number of refugees that the United States will accept annually, even if their claims are proven acceptable. It calls for an end of the practice in which one legitimate immigrant can request that immediate family members follow him or her — replacing that with means-testing immigrants for their financial worth and the value of their skills. It also calls for speeding up deportation, adding 370 new federal immigration judges to help clear up a backlog of 600,000 immigration cases currently in the system, and then setting up a quota system for those judges to be evaluated on the number of cases they close.

All of those wish list points have the immigrant community –– both legal and undocumented –– angry and afraid.

“Latino and Hispanic people all over the country, all over Texas, and here in Fort Worth are worried about what is going to happen if Trump gets his wish list,” said Hector Carillo, former director of the local chapter of the League of United Latin American Citizens, a national organization devoted to advancing economic and educational opportunities for Latin American citizens. “People are worrying about losing their homes and businesses if they get deported. Even in Fort Worth, people are giving their power of attorney to other people to make certain their children and property will not be lost if they get picked up in a raid. There is just so much uncertainty about what is going to happen because this guy, Trump, has to keep feeding red meat to his supporters to keep them happy. It’s pretty frightening.”

Faith in Texas, a racial justice nonprofit, has been helping families to prepare for deportation. “My work has me organizing people in churches in Fort Worth,” Faith Texas organizer Maria Robles told me, “and I find that some people think things are still OK here because there is a good relationship between the police and the Latino community in Fort Worth. But then there is another part of the Latino community that is very worried that the first time they come in contact with ICE, they might be deported. So what we do is prepare families to face whatever threat they might have if they are detained or come into contact with ICE.

“We get them to have a plan in place for who will take their kids to school or get their kids to a doctor if they are deported,” she continued.

Planning and preparation allow families to keep fear from paralyzing them, she said.

Are local churches harboring people in sanctuary to avoid deportation?

Robles said it hasn’t reached that point in Fort Worth yet.

“We know there are churches all around the country that are giving people sanctuary, and in the Dallas-Fort Worth area there are now 10 congregations that are entertaining the idea of sanctuary for people faced with deportation,” she said. “I’m confident that if and when the need arises, it will be met.”

Calls to several Catholic and Protestant churches in Fort Worth backed up her claim. A person who asked that neither she nor her church be identified said her congregation has not been asked to protect undocumented immigrants but that she probably would.

“I don’t think we would turn anyone away,” she said. “What is going on is not good for the community at all. You should not instill fear in people who are trying to make certain that they are contributing to our city.”