Imagine pulling up to an ordinary-looking brick building, handing your keys to a valet, and then being whisked into a cheerful dining room by a sharply dressed waiter. You spend the next hour or so sampling everything from sangria-compressed watermelon to tortillas fried in bacon fat, all the while bonding with other guests seated around an intimate shared table. As you wait for your check, you’re struck by a sudden melancholy: You’ll never get to enjoy these dishes again. Not because this was all just a beautiful dream (although, free valet and bacon fat have featured in several of mine) but because the delicious vision I just described was produced by the kitchen at Magdalena’s Supper Club (502 Grand Av, 817-740-8085), a pop-up that serves a different menu each month.

The club, which opened a little more than a year ago, is the brainchild of Chef Juan Rodriguez. While the supper club concept is new, Rodriguez has been in the scene for a while, having held positions at Reata Restaurant and Lonseome Dove Bistro. He appears to have garnered quite a following. Despite its relatively recent inception, more than 2,000 people have already joined the Magdalena’s mailing list, and the events routinely sell out in a matter of minutes. 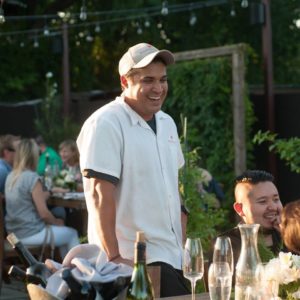 Despite the pop-up’s growing popularity, I managed to snag a spot at several recent events. I must admit, given the excitement surrounding Magdalena’s, the exterior of the unassuming North Side venue left me with a slight sense of foreboding when I first laid eyes on the boxy, innocuous building. But the nondescript exterior belies an airy dining room lined with long communal tables that are dotted with arrangements of succulents and charmingly mismatched tableware. The odd location also provides an unexpectedly scenic view of downtown on cooler nights when meals are served on the patio.

Though Fort Worth is home to a smorgasbord of Mexican restaurants, Rodriguez’s particular interpretation stands out. Some of the dishes are so unique that even adventurous eaters may find themselves hesitant to dig in. The chef doesn’t shy away from using authentic ingredients and spices that may initially intimidate the uninitiated. However, he carefully combines these more unfamiliar ingredients with faddish foods like avocado toast and chia seeds to make even the most out-there dishes more accessible. A mouth-watering illustration of the innovative chef’s old-meets-new approach was the Oaxacan salsa made of finely processed grasshoppers and ants served with otherwise-traditional pork tacos at the August dinner.

Rodriguez and company recently launched another club: Buenos Dias Breakfast Club. At the inaugural meal served in mid-September, a papaya smoothie, slice of cheesy brioche, heaping platter of huevos divorciados, and cup of cafe con leche mousse were more than enough to satisfy even the most ravenous bruncher. Breakfast was served on the usually charming patio, but the scorching midday sun made savoring the feast a chore. Several diners even stood in the bathroom between courses to escape the heat. Hopefully when Texas gets the memo that it’s November, this won’t be an issue at future events.

Grabbing a spot at Magdalena’s can feel a bit like joining a secret society. People tout their reservations with pride, eagerly comparing how long each waited to get a seat at Chef Juan’s table. Excitement only grows throughout the meal –– when I went, even the most disinterested dad-types were snapping Instagram-style pics of their food by dessert.