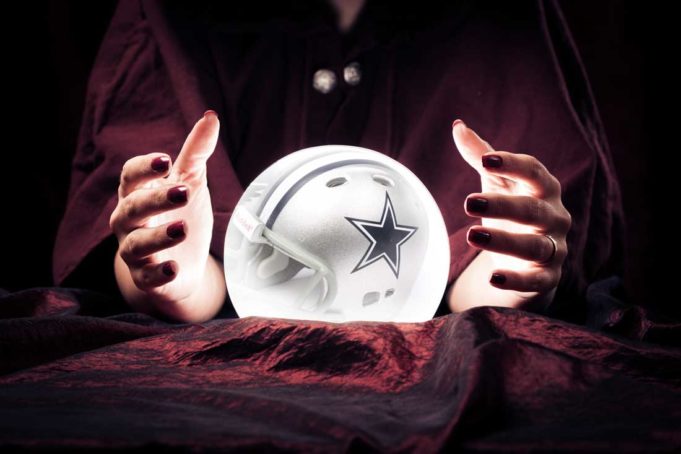 Two months ago, I wrote a piece containing a depressing prediction about this Cowboys season. After an up-and-down first four games and a head-in-the-oven-inspiring defeat to Green Bay, I put a smart-money bet on the Cowboys’ following up a historic 2016 season with a dud and finishing 8-8 this year. I’m not trying to take credit for Nostradamus-level clairvoyance. Any would-be armchair quarterback could have seen the possibility then. The only thing consistent about this team is inconsistency. This season’s version of the silver-and-blue is the equivalent of a well-armed British man-of-war with a narcoleptic pilot at the helm. When awake, it’s a blistering show of offensive might, but when dormant, it’s a ghost ship locked in a clock-calm drift in the open Atlantic. Five games was a small sample size, sure, but the trajectory could easily be deciphered, and it looked set at a broad flat line.

Much has happened in the eight weeks since. After the Packers game, Dallas ripped off three dominant wins against the 49ers, the team in Washington, and the Kansas City Chiefs (an early sexy pick to represent the AFC in the Super Bowl). It was looking like I would be choking down a healthy portion of noir-colored bird. Then that once-bright comet plummeted back to Earth and bored itself deep underground and went cold. In the following three games, a Cowboys team bereft of key players at several positions matched an anemic offensive effort with a crepe paper-walled defense and took public canings at the hands of the Falcons, the league-best Eagles (excuse me while I rinse the sting of vomit from my throat), and a new-life Chargers team on Thanksgiving. The Cowboys’ Turkey Day game is a tradition synonymous with the holiday itself, and the game I most look forward to during the season. This year’s game, however, was a particularly embarrassing low for this team, capping the worst offensive stretch in the franchise’s 47-year history. Dak and the offense managed a mere combined 22 points through those three games.

The defense in each of the recent losses largely held its opponents at bay through 28 minutes of play, only to habitually allow a score just before the half, giving the opposing team the momentum that they’d carry into the second half. This also seemed to only pick up steam as the games wore on, with the defense ultimately allowing 70 more points than the offense could muster over that span.

The same team that effortlessly dismantled their opposition through three consecutive games was equally dismantled (with even less effort) by their three subsequent rivals. This highlighted a glaring inability on the part of the coaching staff to make any sort of adjustment. They did essentially nothing to help put their reeling team in any better position to compete. As a result, with fans’ mounting frustration stoking the white-hot opinions of sports media figures, the call for regime change started to ring in Cowboysland. I myself went on record in favor of sending Coach Jason Garrett-Bot to the great scrap metal-recycling plant in the sky. Had this team put forth a similar listless attempt at playing football in their rematch with the team in Washington this past Thursday, I have no doubt there would be a new interim head coach in Garrett’s place to clap like a doofus when the team screws up.

But after the great Turkey-Day Massacre of 2017, the coaches finally made changes. They decisively re-committed to the running game and made a few moves on the defensive side of the ball, promoting promising rookie cornerback Chidobe Awuzie to a starting role and splitting more time between the safeties, helping limit the blown coverages we’ve become accustomed to from Jeff Heath and Byron Jones. The changes helped. Awuzie broke up three passes while allowing no completions and had a handful of tackles, and Alfred Morris and Rod Smith teamed up for the best rushing game without Ezekiel Elliott that the Cowboys have been able to manage so far, with 144 combined yards and two touchdowns between them. The Cowboys won handily 38-14.

The victory, much needed as it was, doesn’t do much to lift the prospects of a doomed .500 team. Those adjustments should have been made a month ago while there was still a chance to save this season, but as has been the case throughout his tenure, Garrett has shown reluctance or the inability to do those types of things in a timely manner.

So here we are, three-quarters through the season, sitting at 6-6. The Cowboys have to run the table and finish 10-6 to have a chance at the postseason, and even then, they likely need other teams to lose. Next week’s tilt against the Giants, with the fifth- and sixth-string wide receivers they’re trotting onto the field these days, should get things off on the right foot to that end. A game against a beatable Oakland team can get them to eight wins, but then they draw the Seahawks, who just beat the league-leading Eagles (there’s that vomit taste again), then those same Eagles in Philly to close out the season. I just don’t see Dallas getting there. Whether dominating their opponent or being the team dominated, this season has seen some wild up and down swings. What it ultimately amounts to is a zero-sum solution. As always happens when adding equal and opposite figures, the end value is zero, just like this team’s playoff chances.