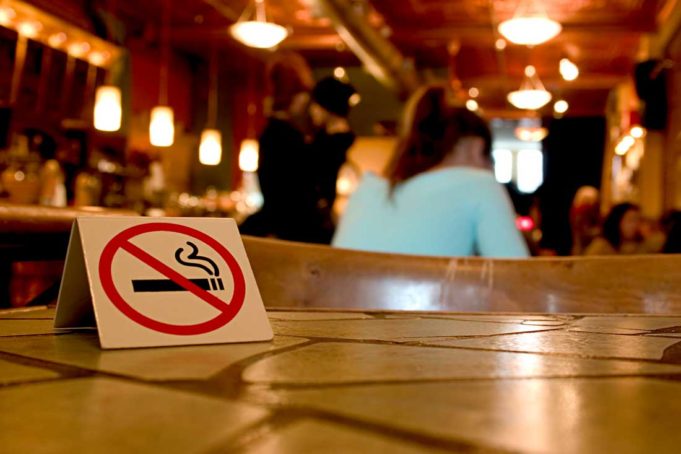 You probably know this already, but on December 12, the City of Fort Worth updated its smoking ordinance, extending its prohibition of cigarettes and e-cigarettes to bars and bingo parlors, limiting smokers’ privilege to light up to the parts of outdoor patios that are 20 feet from a door, private clubs, and cigar bars. The ordinance goes into effect on March 12. I couldn’t be happier.

Well, that’s not totally true. I think the 20 feet rule is kind of unreasonable, and it seems like it was a compromise concocted by someone who doesn’t spend much time in bars, because there are lots of bars that don’t have that kind of outdoor space. But whatever. I’ve been hoping for this smoking ban since I’ve been old enough to go to bars, even more so since I started working and performing in them. If my wallet is lighter for a little while because of diminished business, I’ll deal with it.

Of course, the idea that a smoking ban in bars will harm sales is one of the biggest arguments against extending the ordinance’s reach, and it’s not without merit. Certainly, there are plenty of patrons all over town so calcified in their routine (sit down, light up, order drink) that they will refuse to imbibe where they can’t smoke. That might seem like a lot of potentially empty seats, but in truth, smokers are a minority, and, statistically, that market share is shrinking. In 2016, the Centers for Disease Control and Prevention reported that 15.1 percent of adults smoked in the previous year, a number down 1.7 percent from 2014 and almost 10 percent from 1997. In interview with NPR’s Audie Cornish contemporaneous with that study’s release, Dr. Tom Frieden, then-director of the CDC, said, “One thing that’s happening is a whole generation of kids smoked a lot less, and they’re aging in and replacing the young adults who smoked at a very high rate 10 years ago.”

To extrapolate, those figures say only 15 out of 100 adults smoked in 2016 (like I said, a minority), and as stressful as 2017 was, trends are trends. I suspect that that number has dropped even more over the past year. Then there’s the other implication regarding Frieden’s “whole generation of kids” who smoked a lot less: When those nonsmoking teens are old enough to drink in bars, the number of smokers will be even lower still. So while a smoking ban might make some regulars so indignant that they never darken their favorite bar’s door again, their vacated spots will be claimed by new drinkers with no experience of smoking-permissive bars.

I’m confident that the economics of Fort Worth’s updated smoking ban will take care of itself, because bars stay in business by selling alcohol, and alcohol is the vice both smokers and nonsmokers have in common.

But shrinking revenue isn’t the only claim against the ban. Many of its opponents vociferate about government oppression and other libertarian appeals. “I’m an adult, and it’s my body, and it should be the choice of the business whether or not to allow smoking,” goes the argument and with it a corollary: “If bartenders don’t like my smoke, they should go work someone else.” I don’t have the column space or the energy to debate that with facts and logic, so enjoy this emotional retort: While I don’t think smoking cigarettes makes you a bad person, it is undeniably self-interested. Yes, your body is yours to destroy. But what of my body? What if I don’t want to destroy it with cigarettes? When we are both at a bar, you can fill yourself with liquor or beer or wine, but unless you spill a pint on me or puke on my shoes or get drunk and run me over with your car, you cannot physically make me part of your indulgence. However, when the smoke from your cigarettes drifts into my face, clings to my clothes, and fills in my pores, I am forced, against my will, to participate in your destructive habit.

No offense, truly, but your habit is gross. More than anything, I wish you’d quit it, because while your smoking is bad for my body, it’s even worse for yours. Why not do us both a favor and conquer your compulsion once and for all? Because whether you like it or not, that smoking ban is happening. I still want to serve you drinks.