Spreading the craft beer gospel is less about conversion than it is about showing gratitude. I happened upon Panther Island Brewing sales rep Joe Morón at a recent pint night at Old Chicago Pizza and Pint Night in north Fort Worth. The beer rep’s smile was omnipresent that evening. When he meets a fan of his Northside Brewery, Morón responds with a time-tested trope.

“I tell them thanks for the support,” he said.

Morón has a backstory that many in the beer industry would envy. By 12, Morón had developed an affinity for collecting beer bottles. There was something about the tribalistic gatherings and comradery associated with drinking beer that fascinated him, he said. His father acquiesced and let his beer-enraptured son build the collection of glass bottles that Morón keeps to this day. The over-21 phase of his life has focused more on drinking and promoting the contents of said bottles of brew, first as a volunteer at Panther Island Brewing and for the last two years as a sales rep. 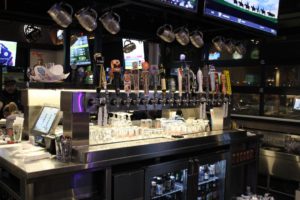 In addition to peddling Panther Island craft suds, Morón said pint nights play a central role in promoting the Panther Island brand. He organizes three to four pint nights per month, focusing on his territory: Fort Worth, Denton, Weatherford, and Mid-Cities. The concept behind pints nights is as simple as it is ingenious. (Basically flood a pub or bar with special releases from one brewery and throw in heapload of swag.) The magic ingredient may well be a lingering curiosity everyday beer drinkers have with the people who make and distribute craft beer. That pint night fad shows no sign of waning. The bar that night was packed. Given the near-freezing temperatures outside that Thursday night (and the number of people sporting Panther Island glassware), Morón deserves at least partial credit for the turnout.

Panther Island Brewing recently hired a lead brewer from Garland’s Intrinsic Brewing. In short, be on the lookout for a new rollout of Panther Island brews this year. And be ready for more nights of brewery swag giveaways, better known as pint nights.

I wasn’t the only one having trouble finding this popular Belgian Quad. After two failed raids on Spec’s, I returned to the craft swill that abounds on grocery store shelves these days. That is, until someone brought me the telltale grey box I was looking for. The plum- and fig-kissed ale had a lively head that soon fizzled out, leaving the beer surprisingly flat. A raisin-y prelude concluded with a bitter postlude on my palate. The light body didn’t weigh me down. The beer was unlike anything I’d had before. I’m still waiting for the return of Kafkaesque, though.