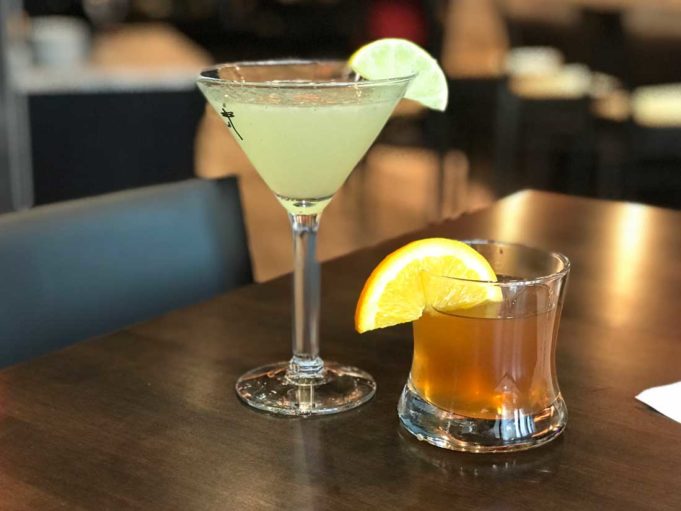 When Twigs Bistro and Martini Bar in The Shops at Clearfork opened in mid-December, I was already up to my eyeballs in new joints to scope out for this column. I kept pushing my initial visit further down the line. The place’s name has two words that piqued my interest – “martini” and “bar” – so I kept it on my permanent radar.

Finally, this past wintry Saturday, my boyfriend and I were skulking about in the REI Co-op looking at equipment we will never use for hikes we will never take, and we decided to try Twigs while we were in the neighborhood. The name conjured up an outdoorsy vibe anyway, and the chain is based out of beautiful Washington State. I was expecting a rustic look and an amazing gin selection.

We snagged a high-top table in the empty bar area, and I eagerly scanned over the martini menu looking for ample gin, vermouth, and garnish options. To my confusion, it appeared this “martini bar” serves only one version of the classic cocktail, with a choice between Tito’s vodka or Bombay Dry Gin, mixed with Martini & Rossi dry vermouth, and garnished with two olives. The rest of the martini menu section consisted of flavored vodkas mixed with fruit juices, liqueurs, and simple syrup.

Oddly, the menu of Twigs seems enamored with drinks that were en vogue only during the days of Sex and the City theme parties. Drinks like the “Sexy-Tini” and the “Ultimate Lemon Drop” were bound to send me into a coma from eye-rolling so hard, so I opted for the Cucumber Lime Basil Kazi, a shaken combo of Svedka Cucumber Lime Vodka and triple sec muddled with fresh basil and limes. I haven’t ordered a kamikaze shot in more than a decade, but luckily this version of the drink was nice and crisp, not too sweet, and perfect to sip while reading back issues of Cosmopolitan. My significant other eschewed the fruit juice in favor of a riff on the Old Fashioned dubbed The Bulleit, made with Bulleit rye whiskey, Ancho Reyes chile liqueur, sugar, bitters, and cherry and garnished with an orange. The Ancho Reyes lent a bit of heat and depth to the cocktail.

Maybe the weather had something to do with this, but we felt like the whole staff had an Ambien hangover, because our time there moved so slowly. Our server wisely recommended the crab mac ’n’ cheese, though, and it was a delicious carb explosion of a dish that would have been the cat’s pajamas a few years back … around the same time the martini menu was relevant.

It’s not just the menu that invokes the last decade. The décor has accents like a see-through glass fireplace and an open kitchen. Both are mostly reminiscent of a Hampton Inn continental breakfast area circa 2003. In fact, if you traveled for business in the past and went to hotel watering holes, you will have serious déjà vu at Twigs.

There is a central square bar that looks like a decent place to post up, despite the presence of multiple bottles of sickly sweet booze like Hpnotiq and Kinky liqueur used as accent pieces. The entire back wall by the kitchen is emblazoned with some painted-on platitude about the merits of eating and drinking. At this point, I’m fully expecting to see some decade-old throw pillows that say,  “Dance like No One is Watching” tossed onto the banquettes under a banner that says, “Mission Accomplished.”