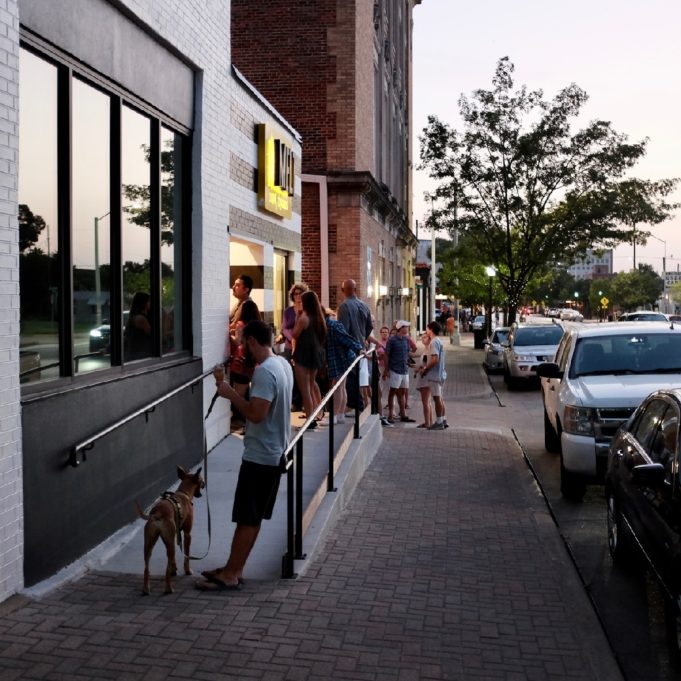 I don’t know if you’ve noticed, but Fort Worth is having something of a freak-out lately re: the city’s future and its place in the world. The city’s recent Economic Development Plan calls out what should have been obvious for years: Fort Worth is adding residents but not jobs, and is perceived as a smaller, less important city –– a borderline “bedroom community” –– next to Dallas.

All manner of hot takes on the Economic Development Plan have been rolling around the media universe since the nearly 500-page document’s release. I’ve been perusing the document in my free time (why yes, I am that exciting), and something that strikes me is how little the plan discusses one of Fort Worth’s most glaring, painful shortcomings as compared to many of our competitor cities in the United States: our less-then-barebones transit system, our over-reliance on cars and their related infrastructure (highways, parking, etc.), and how so much of Fort Worth is still built with an outdated, 20th-century auto-centric mindset.

The word “transit” appears far less frequently in the huge Economic Development Plan than one might have hoped. The phrase “light rail” doesn’t appear at all, apart from two mentions that apply specifically to cities in other states. “Streetcar” only shows up in relation to Kansas City. “Walkability” pops up when talking about downtown and the Near Southside.

Fort Worth’s lackluster transit system has been a thorn in our side for ages, and we’ve been talking about its many and varied problems and plans to improve them for just as long. I know I’ve certainly been talking about it since I started writing the original Fort Worthology blog more than a decade ago. Our effort to build a modern streetcar system came to an end in 2010, killed before the study was even complete by suburban city council reps of limited vision and a mayor without a backbone. It was just the latest in a string of streetcar, light rail, and subway plans dating back to at least the 1970s, a never-ending series of shouts toward generations of city leaders that we need to do better which have resulted in nearly zero progress. We still have a broken and unpopular bus system, a commuter train which runs to Dallas, and soon-to-be another commuter train to D/FW Airport, a transit system built for the desperate and a small subset of suburban commuters. Fort Worth has been promoting central-city redevelopment for years, encouraging a new generation of young, forward-thinking residents to move to walkable inner neighborhoods, then completely leaving them hanging without effective central-city transit improvements and wondering why so much of our urban development is defined by parking garages.

Meanwhile, that walkable development is primarily confined to downtown proper and a smattering of “urban villages” like Magnolia Avenue, South Main Street, West 7th Street, and Race Street. As beneficial as the urban villages are, compared to what some other cities are doing they feel a bit like us trying to have our cake and eat it, too. We can tick off the “walkable neighborhoods” check-box on a marketing pamphlet while keeping quiet on the fact that about 99% of the rest of the city is still being built in a car-centric, unwalkable (and transit-inefficient) fashion. Even development a mere mile or two from the urban villages tends to consist of strip malls and parking lots despite the surrounding context often being the same as what one would find adjacent to a place like Magnolia Avenue. If Fort Worth incorporated walkable, interconnected planning and development into the city at large, we might be thought of as a more exciting city for the kinds of investment the Economic Development Plan desires. We should have the vision to make more neighborhoods all over Fort Worth that take their inspiration from places like Magnolia Avenue and its environs.

Something mentioned by the Economic Development Plan is the public perception of Fort Worth as a smaller city than it is, and I’d believe it. I recently returned from a visit to Portland, Oregon (whose small 250-foot downtown blocks are similar to downtown Fort Worth’s), and despite Portland being a couple of hundred thousand people smaller than Fort Worth, the city positively crackles with energy. Not just downtown, but at the neighborhood level. East Division Street, which isn’t even the most famous Southeast Portland neighborhood main street, feels like Magnolia Avenue on twelve different kinds of steroids. A city built on a foundation of walkable, livable planning has a magnetism that attracts the kind of investment Fort Worth talks about.

Fort Worth needs to add a lot of jobs, but we also need to have the vision to add those while not increasing our dependence on the automobile. Increased car dependency isn’t sustainable, either environmentally or economically – witness the billions poured into highway expansions that, due to induced demand, only wind up making traffic worse. Instead, to truly be a city for the 21st century, Fort Worth needs to change how it grows and develops and moves people around.

According to a recent report from Commute Seattle, the city of Seattle added 60,000 jobs downtown from 2010 to 2017. Rather than rushing to expand their freeway system, Seattle cut solo car commuting in the same timeframe by 4,500 trips per day, a decrease of 9 percent, while boosting transit ridership an astonishing 48 percent.

In all our talk of Fort Worth’s future, how to position it as a vibrant place of its own and not just a place to live while commuting to Dallas, that is the kind of vision we should be expecting from our leadership in 2018 and beyond. We need a truly new path forward, because cities that neglect their transit systems, cities that keep building more and wider highways and acres of strip malls and subdivisions will be left behind.