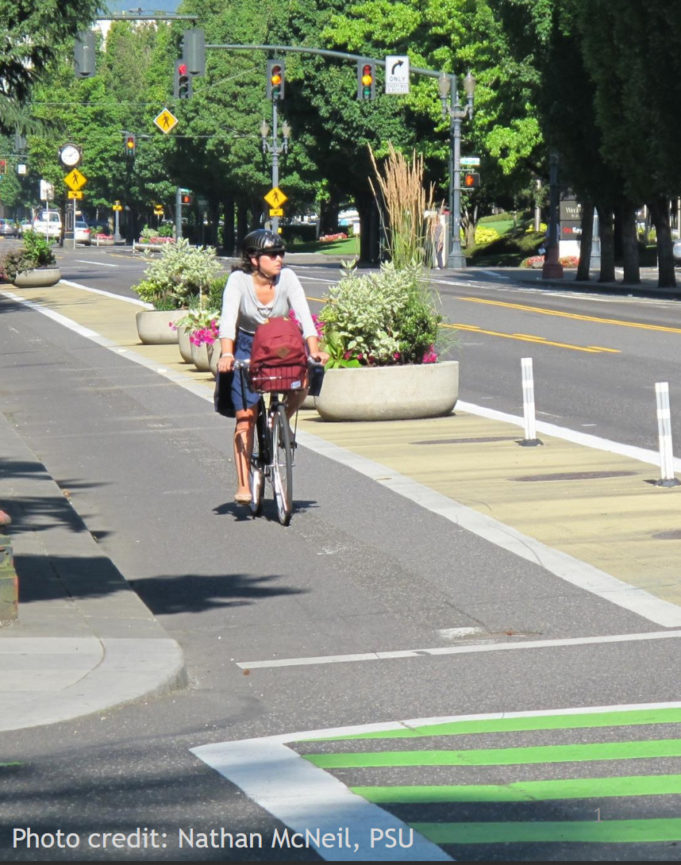 Over the last few years, the city’s Bike Fort Worth plan has made steady progress in getting some form of bike infrastructure onto Fort Worth’s streets. Projects have added paint-striped bike lanes, shared-lane markings (the value of which is debatable, alas), and better signage and connectivity between different parts of the city. Combined with the rise of Fort Worth’s B-Cycle bike share network, it’s become more common to see bikes on Fort Worth’s streets that it was before the plan was enacted.

In the meantime, other cities have been discovering the benefits of going a step beyond simple paint-delineated lanes and building enhanced bike lanes that are physically separated from car traffic. These can take many forms, with the simplest featuring a row of flexible plastic posts on the line between the car lane and the bike lane, and the most secure and popular lanes that are marked out by full curbs or by flipping the placement of on-street parking, placing bikes between the parking lane and the sidewalk.

The benefit of physically separated lanes is apparent when looking at the increase of cyclists using them compared to less-safe lane designs, and by how users of physically-separated lanes feel far safer and more comfortable in them than when forced out alongside car traffic. If a city is to truly grow the number of its residents choosing bikes over cars, it must do more than simply appeal to the small subset of more hardcore cyclists who feel comfortable riding on less-than-ideal infrastructure.

There’s a huge segment of the population that Portland, Oregon bicycle coordinator Roger Geller dubs “interested but concerned.” In a 2006 whitepaper, Geller says this large group of people likes riding bikes, but “they are afraid to ride. They don’t like the cars speeding down their streets. They get nervous thinking about what would happen to them on a bicycle when a driver runs a red light, or guns their cars around them, or passes too closely and too fast.” This sort of experience is all too common on Fort Worth streets, whether they have painted bike lanes or not.

Physically-protected bike lanes make this “interested but concerned” group feel safer and more comfortable, and in turn, more likely to choose bikes over their cars. In a 2014 scientific study by Portland State University, a staggering 88 percent of people who wished to cycle more but felt uncomfortable in simple painted lanes near car traffic said the physically-separated lanes made them feel safer. Getting this demographic of interested but concerned residents feeling safer on bikes means they’re more likely to choose cycling over driving, which in turn reduces the number of cars on the street, cutting pollution and increasing the health of both people and neighborhoods.

While we’ve been painting lanes, several cities in the US have been introducing physically-protected lanes. I’ve seen highly-traveled protected lanes with my own eyes not just in Portland, but in places like Austin, Denver, Chicago, and Los Angeles. If Fort Worth is to continue down the path of becoming a more people-oriented, bike-friendly city, we’re going to have to start implementing our own safer, physically-protected bike infrastructure.

There are signs here and there of Fort Worth coming around to the concept. Unsurprisingly, considering the area’s long-running reputation as home to Fort Worth’s most progressive urban planning & transportation principles, there are physically-separated lanes in the Near Southside. Bike lanes shielded from car traffic by parking have been installed on West Vickery Boulevard and West Broadway Street, and though these streets are currently rather low-traffic in terms of attractions when compared to places like Magnolia Avenue and South Main Street, they show a willingness to push for better bike infrastructure that the city at large would do well to incorporate. The new 10th Street Cycle Track I’ve previously written about isn’t a fully separated lane, but similarly shows a more forward-looking attitude about bike infrastructure.

Fort Worth has shown that bike infrastructure has a place in this city, and now it’s time we kicked things up a notch and truly made cycling as attractive as driving. I hope we start seeing more work on physically protected bike lanes as we look to update our bike plans.