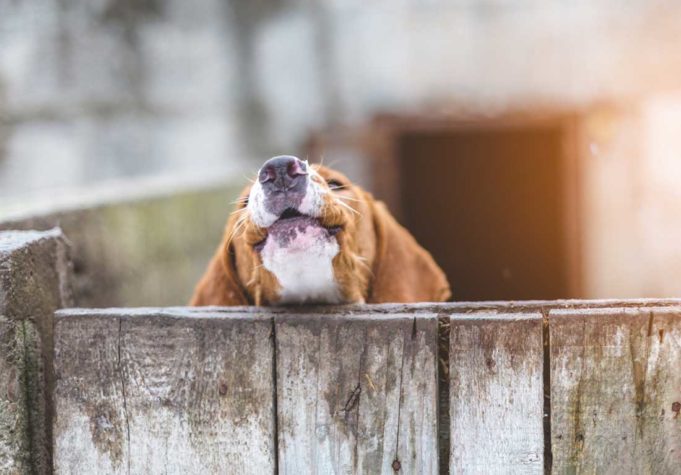 I rarely felt at peace. Even — or especially — when lying down for the night. And when I did manage to hit the sack with a somewhat optimistic outlook, I made sure I wrapped a pillow around my head. The barking from my neighbor’s two dumb Shelties next door could penetrate lead. My family’s tiny wall of brick, wood, drywall, and glass was no match for the seemingly constant racket. Anytime of day, anytime of year, our neighbor’s dumb dogs were barking their heads off. Peace was a fantasy — our bedroom window faced his backyard. You couldn’t escape the cacophony from the living room on the other side of our (small) house, either.

I complained to him in person. I texted him. I called him. “Dude,” I’d say, “your dogs won’t stop barking. You know they must be miserable, and they’re driving me nuts. Put them inside!” And our neighbor, a sweet guy going through some hard times, would apologize and bring in Blue and Flash — for about five minutes. Then they were right back outside, doing their song and dance for the rest of the morning, noon, or night.

Forget about enjoying our backyard. On the rare occasions my wife and I dared to venture through the back door, we tiptoed to keep from startling the mongrels into another hours-long session of rage-barking. It was just short of living in a tent in some war-torn bordertown. You may think I’m exaggerating, but prolonged exposure to that kind of pollution — and even the mere anticipation of more — does weird, damaging things to your brain. I was not myself. I avoided home at all costs, hanging out at the office or the bar for as long as I could to avoid more noise and possibly another confrontation with my neighbor. All I got was a DUI for my troubles. Sigh.

I found a little bit of respite online, where I discovered entire websites devoted to the public nuisance of excessive barking. Growing up in the Northeastern United States in the 1980s and ’90s, I knew one of the first things you did after bringing home a new pup was train it not to bark: shake tins of pennies at it or spray its snout with a little Tabasco-infused water. (The Dog Whisperer uses a similar trick.) After a couple of days, no more nuisance barking. Not that I haven’t met a few responsible dog owners here in Texas — I have — but what happened to training dogs not to nuisance-bark? Or do we just not care about our neighbors anymore?

Because that’s what it seems like. And the city isn’t really helping. In a couple of weeks, Fort Worth City Council will consider new pet laws. The biggest — and best — is that dogs must be on a leash in residential areas. City spokesperson Diane Covey said most complaints received by Animal Control are about loose pooches. In my North Fort Worth neighborhood, we have apparently become a depot for wayward hounds. Every single day on Nextdoor, there’s yet another post of yet another one of man’s supposed best friends roaming the streets. It’s infuriating and scary.

We applaud that proposed amendment and all of the other add-ons, starting with the pooper-scooper law. Following Arlington, Dallas, Houston, and San Antonio, Fort Worth will now slap a $500 fine on anyone who lets his dog conduct its business on his neighbor’s lawn without cleaning it up. Microchipping, which will supposedly help locate missing pets, and intact pet fees — the city will neuter/spay found pets that aren’t sterilized — are the other proposed amendments.

All of them are necessary and prudent. I support them wholly.

I only wish the city would do something about nuisance barking.

Right now, for help with excessive ruff-ing, aggrieved parties essentially have to quit their jobs and become full-time private investigators. They must document when the barking is occurring and how long for up to seven days before the city can take corrective action. They also have to sign an affidavit agreeing to appear in court if necessary. Of the 1,551 noise complaints made in 2017, Covey said, 18 citations for noise were issued. (Though called for noise, officers handed out 97 citations for related problems, she said, including lack of food/water and shelter.) I’m not a mathematician, but 18 out of more than 1,550 isn’t a sparkling percentage.

“We’re trying to get people to work on [the problem] first before we bring in the law,” Covey said.

Understandable, but don’t most people want to avoid courtrooms as much as jail or the dentist’s office? The city needs to delete the criteria for determining nuisance barking, especially considering that Covey said an Animal Control officer will wait on the premises for at least 10 straight minutes of barking to be able to issue a noise citation on the spot. The owners of nuisance barkers do not need any appellate ammunition. Maybe just a long, hard look in the mirror.

My first experience with Animal Control was better than I could have dreamed. After years, literally, of trying to work out a solution with my neighbor — and doing everything in between, from yelling at him to wheedling him with ice-cold 12-packs of Bud Light — I called 817-392-1234 one night and left a message. The next morning I discovered an angry voicemail on my phone from the night before. “I can’t believe you did this, man!” my neighbor was fuming. Apparently, Animal Control had paid him a visit. Five-hundred bucks later, and that was the last I heard of Blue and Flash late at night or early in the morning until he moved several years ago.

Now the houses around my family are quiet, relatively speaking, but for how long? Every night when I pull up to my driveway, I can hear in the distance the sound of one large dog woofing nonstop, and I think, “Those poor neighbors. How can they stand it?”

The answer, as I know all too well, is that they can’t. They need help.