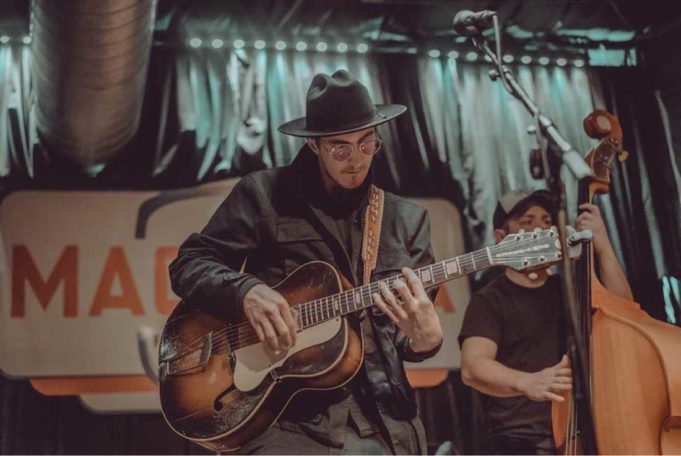 About three years ago, I came home from the bars exceedingly faded one night, and in a flurry of delirious, inebriated interneting, I changed my Facebook name from “Steve Steward” to “David Hellabad.” Giddy from my idiotic, beer-washed, weed-flavored 3am brain fog, I thought my new name was hilarious, perhaps even genius. But hours later, when I woke up hungover and penitent, I was filled with regret and embarrassment and logged on to change it back. Problem was, when you change your name on Facebook –– it might be different now; this was the case in 2015 –– you’re stuck with it for 60 days. As if David Hellabad wasn’t eye-rollingly stupid, it also proved to be a low-level hassle.

I bring up my David Hellabad period because a prominent local musician has recently rebranded himself, and I need a lede grabbier than “Luke McGlathery is calling himself something else now.” Not that that story isn’t newsworthy, but column space being what it is, sometimes circling the landing pad is in order. And, anyway, I’ve never shied away from pulling a cautionary tale out of the annals of dumb things I’ve done when drunk.

While it was dumb for me to change my name, it’s perfectly fine for other people. Puff Daddy, for example, does it every couple of weeks. He’s currently going by Love, after all. In similar fashion, local folk/punk/bluegrass musician Luke McGlathery is now calling himself Tommy Luke, though the songs remain the same.

If that doesn’t strike you as a monumental shift, you’re right, because it’s not. Prince becoming an unpronounceable symbol took some getting used to, but I feel like McGlathery cutting his performing name from five syllables to three should be easy to buy into. “My last name … people say it wrong, spell it wrong,” Luke told me. “Tommy Luke is on my birth certificate. I should’ve just gone by Tommy Luke a long time ago.”

Luke is launching his rebrand by hitting the road for most of the month of June in the RV he lives in. (Fun fact: It used to be Telegraph Canyon’s.) He’s traveling with local harmonica player Gary Grammer and Marfa-based fiddler Westley Holtsford. Tagging along is photographer Aaron Shultz. “His pictures are badass,” Luke said. “He said he would drive, too.”

Luke’s trip is ostensibly because he has a new album; though, like his repurposed original name, the recording is sort of putting new paint on an old car. Luke basically re-recorded songs from his first two albums at Fort Worth Sound with in-demand Texas Music producer Bart Rose. “It’s my favorite one of studios around here I go to,” Luke said. “Bart does a good job. He’s pretty quick. I feel like he’s got it down.”

Life Ain’t Hard (which, incidentally, is the same title as his 2016 album) includes new versions of his back-catalog favorites, including the title track, “Oklahoma Hula Hoopin’ Angel,” and “I Don’t Know (I Had it All).” It also has two new songs, “The Ground” and “Walkin’ Talkin’ Washin’ Machine.” Essentially, it’s Luke McGlathery’s greatest hits polished into Tommy Luke’s debut, but Rose’s production gives Luke’s bluegrass-leaning, country-influenced folk ditties some professional-sounding heft, making the artist’s shoulder-shrugging drawl sound like he’s been plying his guitar pickin’ trade across the highways and byways for decades.

Luke also will be selling the CDs at shows, while the Stockyards’ famed label Smith Music Group is handling his digital distribution to channels like Spotify and iTunes. With his rebranded artist persona, road-ready RV, and a record he is thoroughly satisfied with, Tommy Luke is ready to make his name stick.