Wednesday 25 – Will the Texas Rangers make any moves to plan for the future before the trading deadline hits on Tuesday? With Manny Machado off the market, teams like the Yankees and Diamondbacks are still looking to add pieces for possible playoff runs, and the home team may reap the benefit. You can ponder this while the Rangers take on the Oakland A’s in what may be your last chance to see some of these players in Texas jerseys. The series runs thru Thu at Globe Life Park, 1200 Ballpark Way, Arlington. Tickets are $20-225. Call 817-273-5100.

Thursday 26 – Rob Little comes to Hyena’s with his high-energy routines about his former careers as an IBM programmer and a McDonald’s employee, where he claims the company magazine gave him an award and wanted him to pose nude and covered in French fries like the poster of American Beauty. He’s not nearly as pretty as Mena Suvari, by the way. He’ll be on stage today thru Sat at 425 Commerce St, FW. Admission is free to $15 plus purchase of two items. Call 817-877-LAFF.

Friday 27 – Twenty years after Hedwig and the Angry Inch debuted on stage, how many other musicals about transgender performers have there been? John Cameron Mitchell and Stephen Trask’s rock opera has now become a staple of queer theater, and now this show winds up Ohlook Productions’ late-night season by telling us all about the origin of love. The show runs today thru Aug 11 at 1631 W Northwest Hwy, Grapevine. Tickets are $15. Call 817-421-2825.

Saturday 28 – The temperature is expected to be 103 degrees during the National Day of the American Cowboy celebration at the Stockyards. Fortunately, this event will have a cool zone as well as live music, gunfight shows, a cattle drive, a rodeo, and contests in eating ribs, growing mustaches, fiddling, and guessing the length of a cow from tip to tip. The event runs 10am-11pm at Fort Worth Stockyards, 131 E Exchange Dr, FW. Admission is free. Call 817-624-4741.

Sunday 29 – Sheldon Epps’ Tony-nominated musical revue Blues in the Night takes us through a history of blues music sung by four anonymous denizens of a run-down Chicago hotel in 1938. The score is heavy on songs by Bessie Smith like “Nobody Knows You When You’re Down and Out” but also includes numbers by white composers,  such as the title song and “These Foolish Things.” The show runs Fri thru Aug 25 at Jubilee Theatre, 506 Main St, FW. Tickets are $24-30. Call 817-338-4411.

Monday 30 – The Sailor Moon movies are what many people think of when they think of anime: scantily clad girls with hyperfeminine bodies and dewy eyes battling supervillains from space. This week, you can go back in time with either English-dubbed or original Japanese-language versions of Sailor Moon R and Sailor Moon S and see the early days of these superheroines. The films screen at 1pm Sat and 7pm tonight at various movie theaters; check Calendar for showtimes. Tickets are $12.50. Call 818-761-6100.

Tuesday 31 – Harkins Theatres’ summer movies for kids series is winding to a close, and the best film they’re showing all season is Paddington 2, which features a tasty-sounding recipe for orange marmalade and one of Hugh Grant’s funniest ever performances as a delusional actor dreaming of a comeback. (Don’t miss his turn in a dog food commercial.) The movie runs Mon thru Aug 3 at Harkins Southlake, 1450 Plaza Pl, Southlake. Tickets are $5. Call 817-310-0145. 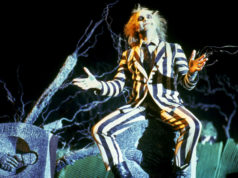