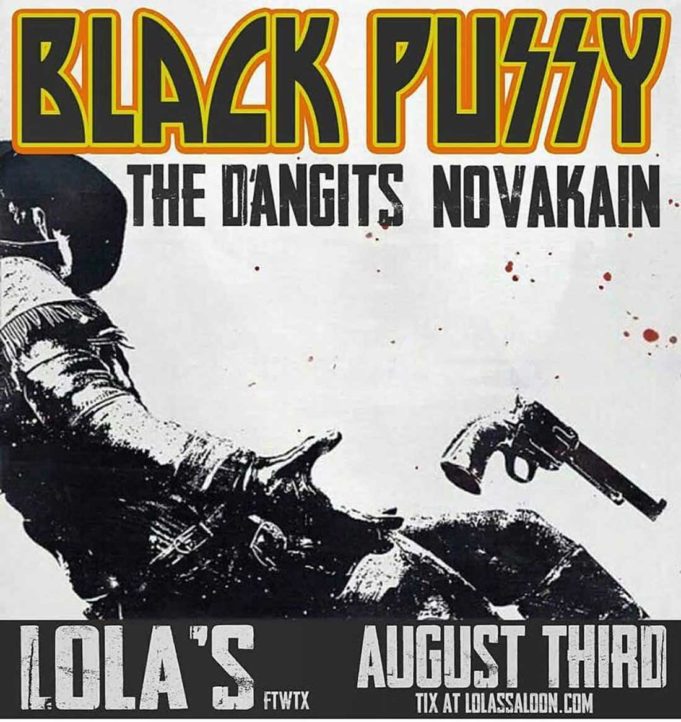 I hate typing “Black Pussy.” I hate that the Portland-based riff-rockers are getting even more press because of their name (and there’s been a lot). I hate that they’ll probably be showered with ink again after they change their moniker to something ostensibly less controversial, which members of the oft-derided five-piece said was forthcoming. (I also hate that I forgot what I was doing yesterday and Googled the name just to see where they’re from. #NSFW) And I especially hate that veteran local-rock impresario Brian Forella recently found himself at the sharp end of what I consider unfair criticism over booking the band for a gig at his beloved venue, Lola’s Saloon, last week.

First, let’s get this out of the way: In my opinion, “Black Pussy” is immature, offensive, misogynistic, and racist. In a recent Vice interview, frontman Dustin Hill defended the name, saying that the words “black” and “pussy” have multiple meanings, and he decried the controversy as the handiwork of “trolls and crybabies.” He also added that he’s related to a black person. (Seriously! I’ll bet some of his best friends are … never mind.)

Hill also claims that his band’s name wasn’t engineered to court controversy *coughs* bullshit *coughs* and is meant to be a vague allusion to the Rolling Stones’ tune “Brown Sugar,” which is a pretty racist song to begin with. However the moniker originated, BP is pushing the boundaries of that long-held rock tradition of offensive, attention-seeking names. Is Black Pussy any more offensive than, say, Jon Cougar Concentration Camp, Funeral Rape, AIDS Wolf, or Gay Witch Abortion? BP isn’t even close to being the most prominent band to tag on the P-word –– that honor is held by either Nashville Pussy or Perfect Pussy, incidentally two better, more progressive-sounding acts.

Whether or not Hill is sincere in his claim is immaterial, as is my personal distaste for his band’s name. That various local promoters and club owners have praised BP’s live show and vouched for its members is equally beside the point. Over the years, BP has seen more than a dozen of its gigs, a few video premieres, and probably their subscriptions to Cat Fancy magazine canceled thanks to public outrage. Here in little ol’ Fort Worth, a small but loud number of music fans have voiced their disgust to Forella. At least one person is even boycotting the place while encouraging others to follow suit.

And now, after 400 words of rehashed arguments, self-righteous anger, some fluff, and a few laughs (we had good some good times, right?), we’ve finally arrived at the point. A business owner has the right to book whatever band he or she wants, and if you don’t like it, you don’t have to go to the show. If you choose to boycott a venue over one band’s dumb name, then that’s your right – but you’re dismissing all of the great things that that venue and owner may have done for local and touring bands alike.

Sure, Fort Worth suddenly finds itself flush with decent-to-good venues, but few have been around longer than Lola’s and certainly none has booked more road shows featuring up-and-coming acts, given budding young musos their starts, or consistently filled now two stages week after week with solid gigs than Lola’s Mother-Fucking Saloon, so if you’re of the mind to write off years of goodwill over something this trifling, then you deserve all of the misery in which you’re probably already wallowing.

Forella said he isn’t going to book BP anymore. “It’s not worth the trouble,” he mentioned on social media the other day. So there. You won, trolls. You can stop harassing the poor guy on social media, wrongly calling him racist and misogynistic, and finally get back to what’s important: correcting society’s ills from the comfort of your laptop. As for the rest of us, we’ll be drinking at a really cool bar and hanging out with questionable but fun characters while listening to kick-ass music.