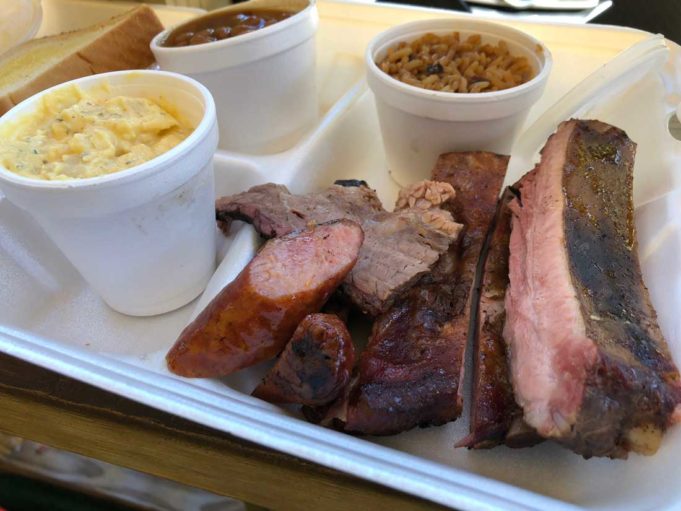 We’ve all heard the term “food desert,” referring to an urban area devoid of grocery stores, farmers’ markets, or reasonably priced restaurants that offer something other than food that pairs well with Mountain Dew. These grub-barren zones almost exclusively crop up in poor neighborhoods, like Stop 6 on the East Side, which qualifies as a food desert, according to the USDA.

I’m ashamed to admit that I don’t make it out to Stop 6 as often as I once did, back before kids, chronic anxiety, and professional burnout crushed my will to regularly explore restaurants in every part of town. My Prosecco-addled memory reminded me that Poly was once brimming with great places for soul food and barbecue. I was saddened on a recent drive around the erstwhile brisket-and-ox-tail mecca when I found only a handful of soul food eateries and even fewer barbecue joints.

While standing in the tiny dining room of his recently opened barbecue joint, Jube’s Smokehouse (1900 S Edgewood Terrace, 817-779-0235), owner Pat Joubert explained to my guest and me that there wasn’t another barbecue place for miles in any direction. His blink-and-miss-it bunker-esque box tucked away in the middle of a residential area is something of a unicorn – a smoked, spicy, Creole-influenced unicorn. Mmm.

Joubert is a Louisiana native who moved to Houston a few years back to coach high school baseball. If you catch him on a slow day and chat for more than two minutes, you’ll quickly understand that baseball is still his passion, though it may have moved down to third on the list behind God and barbecue (which could be the title of his cookbook). He moved to North Texas to pursue a career in the ministry but opened his restaurant after realizing his neck of the Fort housed sparingly few decent ribs.

There’s only one table in Jube’s dining room, and a wooden bar along the wall lined with stools provides enough seating for maybe 8-10 people, and there’s room for another 10 or so on the turf-covered front patio that faces the parking lot.

The bill of fare features standard-issue Texas barbecue options and a smattering of Cajun-inspired sides like dirty rice, gumbo, and jambalaya. It’s clear from the menu that Jube’s specializes in events and large orders. Whole chickens, hams, and turkeys, and mammoth combos, such as The Bishop (three pounds of meat and two large sides for $40) and Pop Noel (sausage, ribs, brisket, three sides, and a drink for $21.99), are all prominently featured.

If you had to distill the kitchen’s flavors down to a word, it would be “smoke.” Jubes eschews recent low-and-slow trends in barbecue culture, and he cooks his meat at a higher than usual temperature, coaxing a heavier smoke profile. The brisket on my recent order ($10 for a plate with two sides) boasted a beautiful smoke ring and peppery bark. The meat didn’t need the Dr Pepper-infused sauce, but it’s a nice touch for those who prefer a spicy-sweet counter-balance. The sausage ($10 a plate) was the standout of my visit. The tubular meat in a snappy case was spicy, plump, and (of course) smoky. The piquant, meaty dirty rice is a can’t-miss side, as is the dill-heavy deviled egg potato salad.

Maybe Jube’s is the beginning of a barbecue renaissance in Stop 6. Until others come along, the barbecue shack is at least a nice oasis.