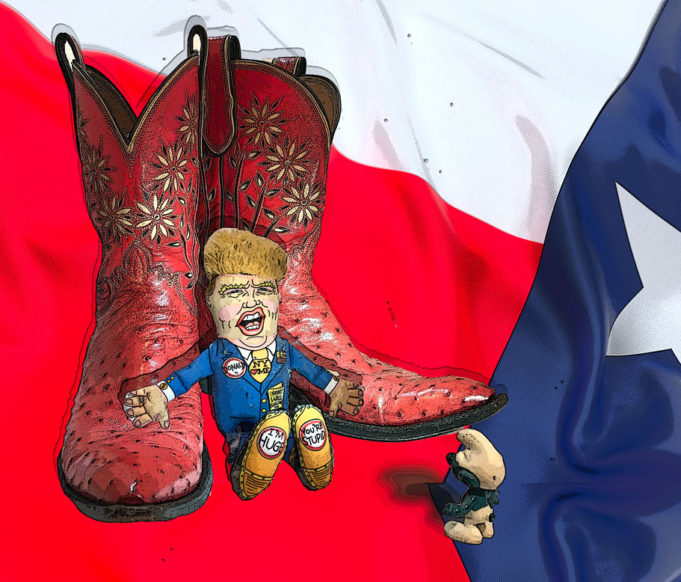 I understand you’re a bit confused now. Before last Tuesday, you knew as sure as the sun shone that Tarrant County and Texas were as red as Valentine’s hearts and would always be. Then Wednesday morning came, and you found your worldview rained on by purple precipitation.

You’ve come to the right place, though. Being a left-wing Texas Democrat, I know all about losing. Hell, I’m old enough to remember all the major networks calling the 1972 election for Tricky Dick even before the polls had closed in the Western states.

Right now, I imagine you’re worried that the left and Democrats are the violent, crazy caricatures that the right-wing bubble portrays us as. No worries. The vast majority of us would never interrupt anybody’s dinner. If anything, we tend to be painfully polite, but we are upset now, and for good reason.

You see, we’re the majority, and we are past tired of being governed by a minority party that is dishonest and anti-democratic and that is totally uninterested in solving the real problems we face. To the point, your president lost by almost three million votes. (And, no, despite what you’ve heard, they weren’t illegal votes cast for evil Hillary.)

In fact, Republican senators represent a minority of citizens. Both Brett Kavanaugh and Neil Gorsuch are the only Supreme Court justices in our history to be nominated by a president who lost the popular vote then confirmed by senators who represent a minority of the electorate. Under our system, the “minority” party, the Democrats, represents the majority. We live in a center-left country yet are governed by one of the most far-right parties of any Western democracy – the Republicans, who hang on to power by cheating every chance they get.

The modern GOP is expert at gerrymandering and voter suppression. Almost every Republican-led state government passed voter ID laws not to protect the ballot from in-person voter fraud, which hardly exists, but to keep some Democratic voters from the polls. This gives Republicans, some estimate, a 2 percent advantage come Election Day, interestingly, a bit less than what Beto lost by. That, my friend, is cheating.

The proverbial last straw is Donald J. Trump. In the American system, the president is not only a political leader. He’s supposed to represent all of us. Back in the 1980s, I worked as a technical editor at NASA across the hall from Ellison Onizuka. You may have heard of him. He died in the Challenger accident. We weren’t buds or anything, just had a nodding-in-the-hallway acquaintance, but I always respected him. When he died, President Reagan came to NASA to speak, to represent our nation in mourning. I never agreed with Reagan’s policies, but I was proud that day how he brought us together.

Trump has never once attempted to do that. Instead, he’s engaged in constant lying and name-calling and has vilified our legal system, news media, even various departments of his own government. He tells his cult-like followers to beat up protesters, praises Nazis, acts slavishly toward dictators, and lies at the dizzying rate of 7.6 untruths per day. His petty name-calling is below the dignity of any office other than maybe reality TV star, always pining for more attention.

His behavior is no small matter. Conservatives often shrug off his verbal and Twitter rampages, but you can’t divorce Trump’s policies from the way he acts. He is supposed to behave like an adult. As president of the United States, he represents us all. If Trump doesn’t fulfill this, he isn’t fit to be president, period.

Now, my friend, I understand you may never accept all the above. But, listen, I’m willing to believe you’re not the caricature of a MAGA-cap wearing, knuckle-dragging, racist know-nothing, and I hope you’re able to do the same for us. Understand that while we may disagree, we love our country just as much as you do. And don’t ever forget, there’s enough room in this world for both of us to be wrong. Peace.