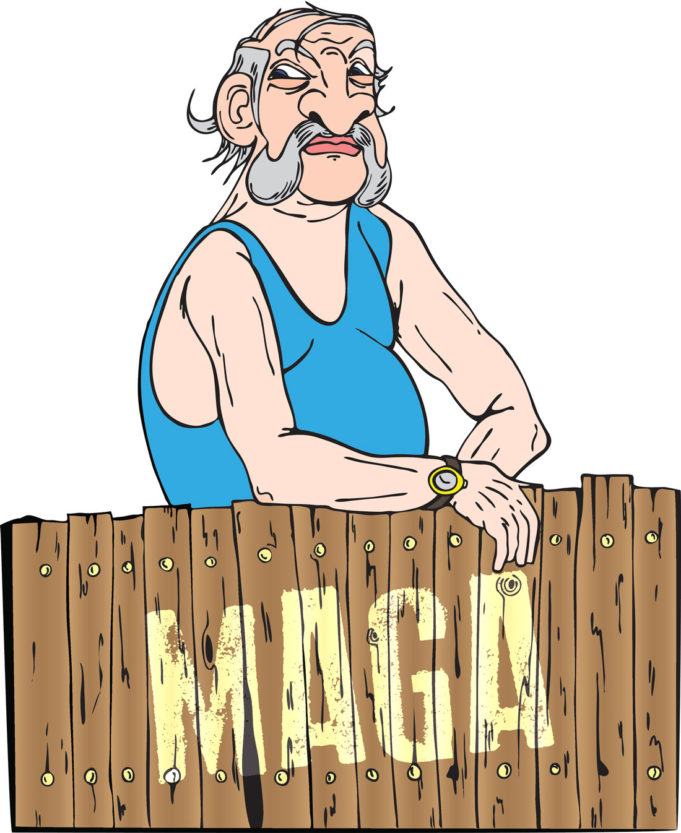 After I texted a woman down the street that my next-door neighbor had died, she wrote back, “The grumpy guy?” Yes, the grumpy guy. My neighbor Jerry was the quintessential Trump-loving, angry, old, white, working-class male –– profanely belligerent, decidedly racist, and proudly politically incorrect. And without a doubt, he was the worst neighbor I’ve ever had. But over the past few years, as his health began to fail, we became friends of sorts.

When he first moved in about 14 years ago, he came over to introduce himself, telling me he was moving from Meadowbrook because it was “getting a little too dark –– if you know what I mean,” he added –– and that he wanted to be a good neighbor, so I needed to tell him if he did anything wrong. At the time, I scratched my head over that, but, in retrospect, I should have smelled trouble coming.

It didn’t take long. After a few months of relative peace, it became clear that Jerry was a weekend drunk and not a nice one. Because he was spying on some neighborhood teens doing drugs, he asked me to turn off my porch light. I complied, but once I made the mistake of forgetting, and did he tear into me. When I explained that neighbors don’t talk to each other that way, his response was to double down, dropping f-bombs like a rap star. After that I made damn sure to leave my light on.

Of course, a little later, he was all smiles after he’d been laid off by Bell Helicopter and needed to borrow my computer to file for unemployment. I was glad to help, but, as my Daddy used to say, no good deed goes unpunished. While hunting and pecking, he noticed the “No War in Iraq” stickers on my file cabinet. Now it was confirmed. I was one of those anti-American subversives that Fox News had warned him about. And from then on, living next door to him became a living hell.

One of his favorite modes of harassment was to wait until almost midnight before revving up his Dodge Ram truck, his twin glasspacks hardly muffling its 318-cubic-inch engine, which made our south bedroom windows vibrate like his twin chrome tailpipes. I often had to call the police on him. But one Jim Beam-drunk night, he called the police on himself. I’m serious. The cops came over and asked me, What the hell? “Man, that dude’s just a few fries short of a Happy Meal, ain’t he?” they said.

But the years of belligerence and drinking took their toll. About five years ago, his health began to fail. One day Smoky, his German Shepherd, got out. Since Jerry was in no shape to chase it, another neighbor and I corralled it. After we returned his much beloved dog, Jerry shook my hand and thanked me enthusiastically. It had been years since we’d had a civil conversation.

At the time, my late wife thought our rapprochement a godsend. I wasn’t sold on it myself. But after she died, and Jerry’s health continued to decline, I tried to help him, rationalizing that she would have wanted it that way. I did all matter of things I thought I’d never do. I called ambulances for him. During his frequent hospitalizations, I mowed his front yard and picked up his mail. I even picked him off the ground a couple of times. No easy task since Jerry was a big guy.

Yet as much as I’d like to put a pretty, Christmassy feel-good bow on all this –– two men who once fought are now friends for life –– I can’t. With his health in decline, Jerry surely mellowed, but he was never an angel. Not many months ago, he bragged how he had cussed out a young pharmacy tech because of some perceived misstep while at the same ragging on one of his drinking buddies for getting his panties all in a knot over something Jerry had said.

But I can’t stop thinking about how during the past few years, he’d call me “bud” when we talked. I don’t know if I really was much of a buddy to him. One thing I do know is that Jerry wasn’t just the old grumpy drunk on our street. He wasn’t only what people saw from the outside. Like all of us, he had some good in him. May he finally rest in peace. –– Ken Wheatcroft-Pardue

Ken Wheatcroft-Pardue is a Fort Worth writer. He can be reached at kwheatcroftpardue@yahoo.com.