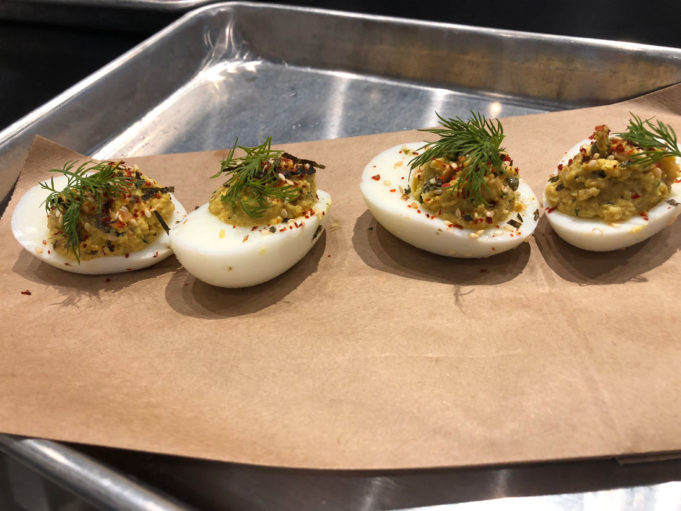 Day 4: I think all the vendors are suspecting that I live here at the Food Hall on Crockett Row (3000 Crockett St, 817-810-9076). Sure, I’ve taken a few hobo showers in the vast family bathroom, but that’s only because I loaded my bowl from Aina Poke Co. with extra jalapeños and the scorching heat gave me the food sweats.

Of the two onsite coffee bars, Butler’s Cabinet is by far the more adventurous. Press Waffle Co. is every bit as good, though it serves more standard coffee house fare. I’m not sure what was in the purple, cold beverage the Butler’s barista handed me after I asked for something to “wake me up,” but it was as bracing as it was refreshing and colorful. It was just what I needed after a long night of definitely not sneaking behind the Knife Bar the evening before and snuggling between two kegs like a feral cat waiting for the morning to come.

Speaking of adventure, Chef Joshua Harmon’s deli/market is stocked full of exotic cheeses, ready-made sides, ingredients sourced from obscure locales, freshmade breads, and the sort of fare you’re more likely to see on The Food Network than lil’ ol’ Fort Worth. Harmon’s enthusiasm for his job is readily apparent. He’s a chef’s chef who talks about his menu with the same reverence a holy man might discuss scripture –– and it shows in his food.

You can get deviled eggs at a lot of places, but how about Korean deviled-egg salad with dill, capers, sesame seeds, fried shallots, horseradish, cane syrup, and a drizzle of the popular Japanese condiment Furikake? In most hands, just the sheer number of ingredients crammed into the usually simple dish might taste cluttered and over-treated. Not so here. Harmon’s take on the classic Southern snack was balanced, as each component shone through without obscuring the tangy egg taste.

Need more proof that Harmon, who once worked the line at Grace, is the Fort’s most cutting-edge culinary mad scientist? Check out his version of a muffaletta, the Benny, with its house-cured ham, mortadella, olive salad, and aged provolone crammed between a housemade sesame seed bun. It tasted like deli food that went to graduate school.

You cannot (and should not) walk away from Butler’s Cabinet without taking home some of the bread. My family destroyed a loaf of the miso brioche in less than two days. A second offering, the crispy-on-the-outside sourdough, opened up to reveal a pillowy soft interior.

I ended my fourth day in a row at the hall with a filling confection from Gigi’s Cupcakes. My chocolate cupcake at the local version of the national chain tasted freshly baked, not too sweet, and was topped with just the right amount of creamy icing. This velvety and moist sweet treat was so much more just the usual opulent fluff served at most cupcake vendors.

I have to cut off this column here. There’s a comfy-looking table in front of K.C.-’cue standout Not Just Q that could, theoretically, make a nice bed, and I need to go claim it. I’ll be back with Part III soon.