Just one hour after openings his newest brick-and-mortar restaurant on the property adjacent to Wild Acre Brewing Company, Joe Riscky was busy cutting slabs of ’cue and chatting up customers. Dozens of diners passed on the outside patio, opting to eat in the warmth of the nearby brewery. The beers, especially Wild Acre’s new Scotch Ale, were a welcome drink to wash down plates of smoked meats and popular southern side dishes.

I sprung for the brisket, macaroni and cheese, and a “sausage bomb.” The Angus beef is smoked on oak with just a hint of paprika and chili powder in the rub. The meat had a good but modest amount of fat and a thick, peppery bark. The macaroni came topped with thick cuts of smokey bacon that coated the dish with a veneer of pork oil. It was delicious. The sausage bomb is a cheddar-stuffed jalapeño wrapped in ground sausage and bacon. It wasn’t as greasy as I thought it’d be and packed a good bit of heat. 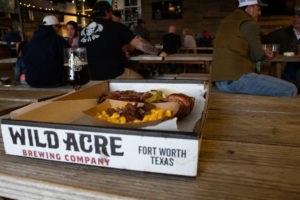 Riscky hails from the local family of Riscky’s Barbecue fame. This new venture is totally his own, though, he said. The idea grew from a mutual friendship with developer Bruce Conti and Wild Acre owner John Pritchett.

Conti “heard that I was out on my own, Riscky said. “He approached me with the idea of opening a little barbecue place. The goal, initially, was to be available for the brewery and [Trinity River Distillery]. We noticed an old storage shed [near Wild Acre Brewing]. It kept growing to where it is today. The current space has a big kitchen and a lot of room to grow.”

“These are the ones that I know sell well,” he said. “You don’t have to spend a lot of time explaining what they are.”

For January, his restaurant will open at 11am on Saturdays until the meat sells out. He plans to expand those days and hours in February. Down the road, Riscky plans to unveil recipes he’s honed over the past two decades. 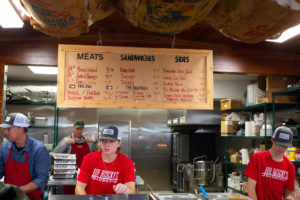 “I always tinkered when I was at Riscky’s, trying different things,” he said. “I fed the results to employees who were my guinea pigs. Over the years, I’ve kept these little recipes and idea. Once it was time to do it on my own, [I pulled my recipes together]. It’s stuff I’ve been doing for a while, but it’s different from what we had at Riscky’s.

So, what (if anything) will this restaurant have in common with Fort Worth’s most famous barbecue chain?

“You’ll see the same quality,” he said. “It’s not just central Texas barbecue, it’s North Texas. The potato salad is German style like we’ve always done. A little bit will be the same, but the seasonings [and many dishes] are going to be a lot different.”