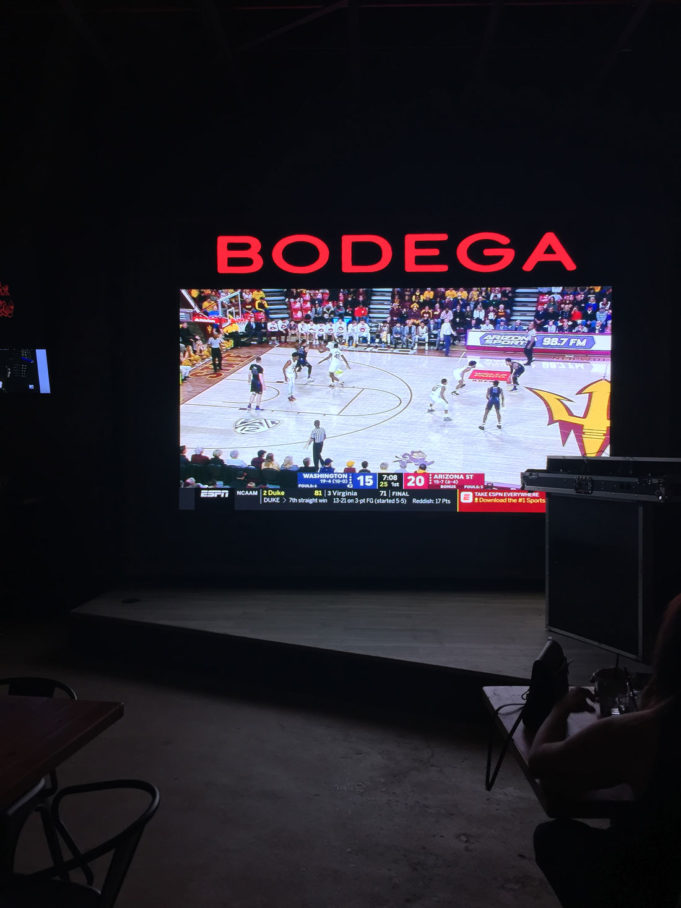 A misty rain fell as we were greeted by a bouncer with bulky arms and a wide grin just outside what seemed to be a single-aisle convenience store.

“Why? Is there alcohol here?” My friend feigned confusion as the bouncer shrugged, chuckling.

However unexpected a spot for a corner store, nestled between Velvet Box and Red Dog Studios, Bodega West 7th is hard to miss. With “BODEGA” in slasher-flick blood-red lights overtaking its windowed façade and a street sign donning the place’s signature blindfolded tiger — a play on the alternate name given to Prohibition-era speakeasies, “blind tigers” — the store does a poor job of looking unassuming.

Its website claims Bodega West 7th is a “Speakeasy & Grocery.” Unless you shop for produce at 7-Eleven, leave your recyclable grocery bags at home.

The bouncer granted us passage — the secret a bit tainted, since we had yet to step foot inside the bodega, let alone the speakeasy — and we entered to find our next obstacle, an industrial-size freezer door equipped with a keypad. Only light research is required to gain access. Like popular downtown cocktail bar Thompson’s, you solve a riddle, albeit obvious, on their Facebook page – this time, the keypad code.

Despite no discernible “access granted” signal, a tug of the handle did the trick. Funneled into a dark room painted in that familiar Kill Bill red, we found ourselves staring directly at a wall embellished with two black shoulder-height pawprints. Pressing my palms to the paws, I pushed, transporting us into … a sports bar.

No whispered passwords. No smoky, dimly lit room with people dancing the Charleston or sipping bootleg gin. Instead, we beheld a high-ceilinged, industrial-looking bar with black rafters, dark-wood shiplap walls, and an LED screen the size of a mid-sized Buick warping the wall across from the bar. The only item evocative of a speakeasy was a lone record player near the DJ stand. It was never touched.

En route to the bar, we weaved past tables semi-packed with people as eclectically confused as the establishment itself. Some wore jeans, jerseys, and hoodies; others, glitzier attire suited for a NYE party (read: glittery tops, tight pants, and tits out).

Perusing the menu, my bewilderment heightened. Vague descriptions and comedic tropes littered the menu’s pages of local brews and spirits — one of the premier cocktails read, “Blood oranges, Old Forester, and mint oh my.” I panicked and ordered a Wanderlust, whose menu description promised, “Beefeater Pink will fulfill your desire.”

They weren’t wrong. Though the menu sacrificed real estate when it might have spared the bartender half-yelling over the music, the cocktails were damn good. 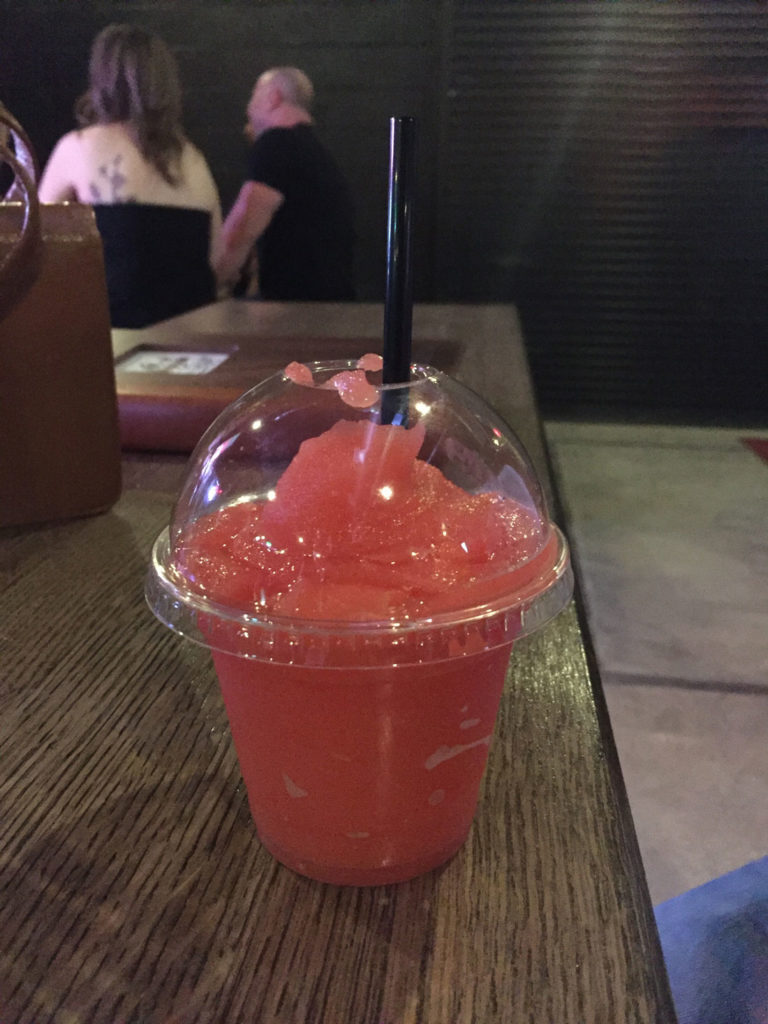 Feeling effervescent from the Wanderlust, I next ordered a Tiki Torch. I gathered from the shouting bartendress that the drink (served in a clay tiki-shaped mug) consisted of rum and ginger beer, topped with an Everclear-soaked sugar cube, which she lit on fire and sprinkled with cinnamon, creating sparkler effects. The production created what was hands-down the most exciting spectacle of the evening.

After 10pm, the pop playlist was replaced by an enthusiastic DJ, who started mixing the same electronic music one might hear at Varsity or Landmark. Adjacent to the screen, the DJ battled ESPN highlights over his shoulder until eventually someone activated the screensaver.

A few revelers formed a makeshift dance floor, tipping the vibe closer to “club,” as they indulged in everything from Tiger’s Blood (a crimson, plastic-domed frozen cocktail reminiscent of a sno-cone) to forties “hidden” in brown bags. Others worshipped before a mecca to Jameson –– floor-to-ceiling shelves where members can store unfinished bottles of the hooch for future visits. “It’s like a coat check but for alcohol,” said the woman guarding the shrine.

Neither speakeasy nor grocery, Bodega West 7th doesn’t seem to know what it is, but, boasting that quasi-dance-club vibe with booze of all kinds, it suits the West 7th area. There’s even a large enclosed patio, which unfortunately was empty the night I ventured there. With the addition of a few outdoor games, the space has potential.

A modern-day take on the blind tiger, the thrill of a covert bar is enough to draw ’em in, and the libations are plenty to keep ’em comin’ –– if you can crack the entry code.