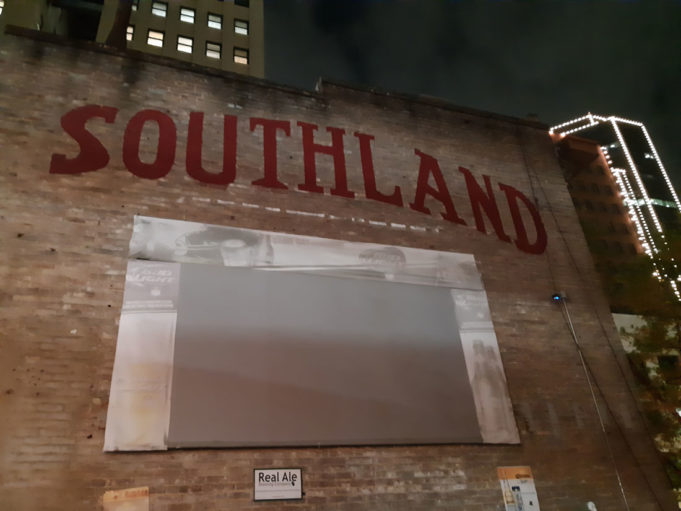 My friends and I never really drink downtown. Sure, I take all out-of-town and overseas visitors for an al fresco craft beer or cocktail at Bird Café to toot the horn of Sundance Square, the Bass-sponsored jewel in the downtown crown. That tourism duty aside, I can safely say that in my nearly five years of living in the Fort, I have never been for a night out drinking downtown. With research duly done, I targeted three bars along Houston Street upon which to focus the efforts of our hardy mixed band of five Friday revelers.

We started the evening at Houston Street Bar and Patio (902 Houston St, 817-877-4727). On its face, this place appeared to check a lot of boxes: a wide range of beers, copious TVs for watching the Sweet Sixteen, and an outside area for taking in the lights after dark while enjoying the balmy spring air. On entering around 8:30pm, we were greeted by an eerie silence in the long bar whose 20 or so patrons seemed to converse noiselessly in their groups and couples. No music played, no thrum of ideas exchanged hovered in the air, and not even a ripple of craic between staff and customers reverberated throughout the space. After a couple rounds of exploring the local side of the beer menu –– a well-kept Dallas Blonde stood out –– we moved up and out to the rooftop patio. The rambling space featured a small bar with the neat trick of running the same tab from downstairs. With a slither of downtown’s vertiginous stretch above us, I fell romantically into the notion that out-of-town visitors could find this spot to be a hidden gem –– one of those secret spaces that travelers boast of finding. After two rounds, my eyes un-misted, we moved back downstairs only to exit and move on to our next spot.

Initially, the plan was to move to the Library Bar, but our group reminded itself of the purported roofie problem and alleged rapey video involving the owner, so we swerved around that and went instead to our next place. Durty Murphy’s (609 Houston St, 817-870-9575) was buzzing with a mostly younger crowd studded with older folks with the thousand-yard stare of regulars. The Guinness was good, considering the notion that the stout becomes less palatable the farther away from the brewery it travels. I ordered the black-and-cream delight three times, and each time the shaky shamrock in the foam sat above a three-inch head. There was badinage to be had with some folks in there while the thousand-yard starers seemed intent on moving neither body nor eyeballs as they sat implacably at their stools at the bar. The bar staff were evidently un-craic-able, too. I mused on this over the weekend. With a largely transient customer base, wouldn’t you reasonably expect the bar staff to be all business or to try harder to chat with and generally welcome their patrons?

In need of a third bar in which to round off the night, a straw poll came out unanimously for Malone’s Pub (1303 Calhoun St, 817-332-5330), a two-minute drive west of the paid parking lot we found close by our first bar. This is the kind of place we had been looking for: delightfully dark, rippling with conversation, with generous pours of well liquor. Just 10 minutes in, we took advantage of the roaming vendor of what turned out to be ambrosial burritos – pillowy flour tortillas enveloping velvety cheese and beans with the bark and bite of chorizo. While the long saloon wasn’t full by any means, it fizzed with the chatter of bar staff and drinkers and held the same kind of unmistakable but equally un-bottle-able magic I found recently at Tricia’s Rock House and The Office. To a man and woman, we vowed to return – most especially for their regular $3 draft specials.