If you follow photographer Donnie Williams on Instagram (willid420), you get a sense of the sheer volume of creative output the street photographer puts out. A quick glance showed 12,894 images published on his feed. By the time this article posts, that number will probably top 13,000.

Those numbers become even more impressive when you realize that Williams shoots exclusively on film. Each photo has to be hand cut, processed, and developed — all of which the photog handles himself. I recently sat down at Off the Record to chat with Williams about his recent zine and photo book release, For Future Reference.

The images date from 2017 and 2018. The book includes an additional 34 images that are even more recent. None of the photos have previously been released or seen by the public. Williams is best known for his shots of bustling Fort Worth life and stoic portraits. In his new release, fans will see landscape and environmental photos that are far more expansive than his often closely-cropped photos.

Many of the images (all untitled) were taken in Arizona and Colorado in 2017. As I flipped through the zine, I noticed that the neighboring photos (one on each page) complimented each other, either through subject matter or visual characteristics. Some photographs are socially poignant, including a set of photos that juxtapose an agitated white supremacist standing near a child holding a poster quoting Martin Luther King Jr. Other images are devoid of literal meaning and are carried purely by their aesthetic beauty. The quality of the content reflects a visual artist who is organically exploring photography’s myriad possibilities.

“I feel like my [focus as a photographer] has changed even since then,” Williams said as we flipped through his zine. “When I see these images, I get the feeling I had when I took those images.”

While some photographers may set out to create a body of work with a certain theme in mind, Williams trusts happenstance and intuition to lead him. There will always be time for editing

“I just make a bunch of images of everything that catches my eye,” he said. “After 26 roles, I’ll go through all that work and see what matches.”

Williams cycles through four cameras. Each version has a different depth of field, cost of film, and film loading time. Those variables keep Williams from becoming too complacent. His next self-imposed challenge includes exploring color photography.

“I see in black and white,” Williams said, referring to his preferred photographic medium. “I see more compositional layers than colors. When I get color photos back, some colors in the back may throw off the whole image. It could be someone wearing a pink sweater. Black and white photography simplifies everything and lets you hone in.”

“People take a lot of images, and where do they go?” he said. “I love physical copies of things. Anything that’s tangible. I work better with things that are hands-on. I don’t like to be on the computer for too long. I like to be out there living.” 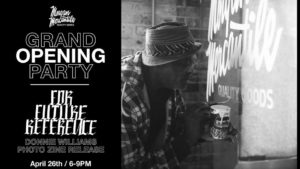 From Morgan Mercantile: Morgan Mercantile is inviting you to celebrate the opening of our brick and mortar location! We will be also celebrating the release of our close friend and photographer on his new photo zine release, “For Future Reference.” Zines and a limited number of books will be available. Wild Acre Brewing Company will be supplying the tasty bevs along with light nibs from Magdalena’s and Hot Box Biscuit Club. We will also be giving away a free pair of 2 Day General Admission tickets to Fortress Festival. (Entry only valid through Morgan Mercantile Instagram giveaway). Visit the event page here.