Downtown is plush with hotel bars such as Whiskey and Rye at the Omni and the WXYZ Bar at the Aloft, both of which have decent followings. But for the most part, hotel bars are often overlooked by people who aren’t sleeping in the same building. Until recently, hotel bars suffered a reputation as being anodyne  the kind of places to enjoy a gin and tonic or over-priced Scotch while listening to a time-share pitch from strangers – certainly not the setting for a decent cocktail program.

No one is going to confuse Bar 10Ten with local progressive cocktail stalwarts The Usual or Proper, but the place deserves points for nailing a few modern bar essentials.

Replacing Mambo’s Grill & Tapas more than a year and a half ago inside the Fairfield Marriott, which smothers the half-block across from the convention center, Bar 10Ten pulls from the playbook of current bar design. With mid-century modern touches such as brass light fixtures and curved stools hugging the bar, bright splashes of cobalt blue and dull grays from the curtains and furniture offset the industrial-looking faux-reclaimed wood and exposed brick on the walls. Both fit serendipitously in the new-versus-old milieu of Cowtown.

Keith LaBonte, the mixologist who was the brainchild behind Plano-based nitrogen cocktail bar Pepper Smash, helped develop the cocktail program at Bar 10Ten, and his influence is all over the menu. When Pepper Smash opened in 2012, it was viewed as innovative, but now that one trick seems gimmicky, especially when applied at imitator bars like Bar 10Ten. The best drinks on offer are craft cocktail staples such as the Moscow Mule, Dark ’n’ Stormy, and Old Fashioned. 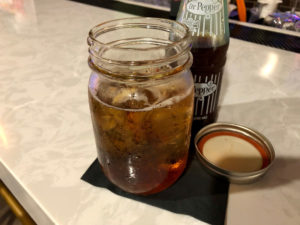 The Fire Smoked Dr Pepper required quite a performance to make. Served in a mason jar (because that’s what us Texans apparently enjoy), the drink relies on smoky flavors derived from blow-torched oak wood filling the jar/glass with smoke. After letting the oaky fog loom in the glass for about 30 seconds, the barkeep poured a bottle of sugarcane Dr Pepper into the jar. The delicacy was fun to watch and Instagrammable – and it was refreshing while sitting on the place’s patio enjoying the downtown bustle.

The Triple M Explosion is one of the menu’s nitro-made selections. With pineapple- and strawberry-infused vodka, it’s served as a frozen beverage that’s sweet without tasting overly cloying. Two of the list’s other eye-catching cocktails were the Smoked Pepperito with tequila, agave nectar, and tikki bitters, topped with jalapeño wheels; and the made-for-twentysomething-drinkers Cotton Candy Martini.

For beer fans, the bar offers six drafts of mostly local brews, but unfortunately the canned and bottle selection is mostly composed of average domestics. The spirits list is scotch- and tequila-heavy, but the list of whiskey and bourbon nods to many local craft distilleries.

The cocktail menu is about to undergo a seasonal shift that will include a chocolate martini, nitrogen mojito, and smoked Manhattan, so if you’re a fan of smoke with your drinks, this bar already has plenty of practice.

Maybe Bar 10Ten will develop its own following of drinkers who aren’t staying at the hotel. There’s certainly a lot for the IG crowd to like, but modern connoisseurs might be disappointed.