USA had to face its semifinal match against England without its totemic set-piece specialist and gay spirit animal Megan Rapinoe, who picked up a hamstring injury in practice. The team’s offensive depth came in handy, as Christen Press started in her place and wasted little time in scoring the first goal in USA’s 2-1 win. Goalkeeper Alyssa Naeher preserved the victory by saving a late penalty in a game where the opponents tested her like no other team had before in this tournament. Now, USA will contest the final on Sunday against the Netherlands. My last post and Rapinoe’s tiff with the orange dude in the White House got many self-styled upstanding Americans rooting for an England victory. Seems that a certain type of man really hates to be in the company of a butch lesbian who speaks her mind and has the game to back it up. I love men like that, because they are so easy to make fun of, and I give them all a Kawhi Leonard laugh:

Was that penalty call against USA soft?
Yes, but to be fair, so was the offside call that nullified what would have been the tying goal by Ellen White. VAR reared its head after going quiet in the last round, persuading Brazilian referee Edina Batista Alves to overrule herself twice. England couldn’t have asked for a better situation than to be awarded a penalty when they were down 2-1, and Steph Houghton fluffed it. The calls evened themselves out here, but remember that they don’t always — just ask the Canadian women about their loss to USA at the 2012 Olympics.

What happened on that penalty?
Backstory: Nikita Parris had been Coach Phil Neville’s designated penalty taker, but then she saw her penalties saved against Argentina and Norway, so he relieved her of that particular duty. The move was defensible, but having a defensive player in Houghton take the spot kick against USA was questionable, even if she is the team captain. The Manchester City player went for placement over power and achieved neither, putting an eminently saveable shot low to Naeher’s right, where the keeper stuffed it. Surely White or one of the other attackers in the game could have struck it with more authority. It’s a bitterly ironic cup of tea that England went down at the semis four years ago because of a forced error by a defender, and now they go down at the same round because of a way-less-forced error by a defender at the offensive end.

Have the questions about Naeher been answered?
A goalkeeper is only as good as her last save, which is always true of everyone playing in net. Besides the penalty, Naeher also conjured a great diving save on a long-distance shot by Keira Walsh and held onto an overhead kick by White that would have made for the goal of the tournament. There was little she could do on the two shots that White put past her (one of which, as I said, was chalked off). She, and perhaps more importantly, her defenders will be full of confidence heading into the final.

How did Neville do?
During the prelude to this game, he picked a silly and tedious fight over U.S. Soccer’s scouts checking out England’s hotel in Lyon as a possible location for USA’s players to stay. Did I mention that he once bragged about beating his wife on Twitter?

No, I mean, how did he do on the field?
Not too bad, actually. Identifying USA’s fullbacks as a possible weak link, he started as many wingers as possible, and while Parris was less effective playing out of position down the middle, it was Beth Mead’s inch-perfect cross from the left that gave White her goal. I am mystified by why he substituted one defensive midfielder (Walsh) for another (Jade Moore) when England was down late in the game, but this is a sport of fine margins. Had Houghton or someone else buried that penalty and England gone on to prevail, we’d be analyzing how the moves he made led to the win. It certainly is down to him that this 2-1 victory by USA felt less like a siege action (like their wins over France and Spain) and more like two heavyweights trading haymakers. A coach who came up through the men’s side as a player and won almost every trophy possible at Manchester United thinks the Women’s World Cup is worth trying to win. That’s big, and it probably played a role in the USA-England match being the most-watched TV program in Britain all year. If his presence here raises coaching standards on the women’s side, that’s good. His brother Gary was the better player, but Phil can now say he is the better coach.

How significant was it that Alex Morgan scored again?
The striker hadn’t found the net since the opening-game beatdown of Thailand. Goalscorers go through dry patches, and some of them are useless when they’re not scoring. That is not the case with Morgan, who has assisted on three goals by her teammates, and would have more if soccer were like hockey and credited secondary assists. Not only that, she (and Press as well) provided a ton of pressure on England’s defenders when they had the ball and prevented them from becoming too comfortable in possession. Much of the talk about Morgan is about her blazing speed and excellent shooting touch (and, yes, about how pretty she is), but what tends to be overlooked is how many hard hits she takes in each game, an inevitable byproduct of becoming the focal point of USA’s offense. She isn’t the largest forward at 5’7”, but when she’s knocked down, she gets up and comes running back at the defense with the same drive and intent. She was the recipient of both yellow-card fouls by Millie Bright that got the defender sent off, which effectively killed whatever chance England had of coming back. Morgan also scored that goal against England with her head; heading the ball at goal had been a weakness in her game, but she has improved considerably in that area. Canada’s Christine Sinclair will eventually pass USA’s Abby Wambach as all-time leader women’s scorer, but if Morgan keeps up this strike rate, she’ll be coming for both of them. Also, her tea-sipping goal celebration showed that she brings her own sense of flair to the team.

Are the English really this upset about that?
Only the ones who are already looking for reasons to hate America, I would say. The Daily Mail (think a fustier print version of Fox News for British people) ran a two-page spread on the American “multi-millionaires” being “arrogant” ahead of the England game. Aside from Morgan (who has commercial endorsement deals), these players aren’t multi-millionaires, and U.S. Soccer is doing everything possible to keep it that way. As for “arrogant,” that can always be argued, but I say three World Cup titles and four Olympic gold medals in 30 years tend to engender a bit of arrogance. Right now, the arrogance is working for USA. Also, Piers Morgan had a Twitter meltdown because of the game (like I said, a certain type of man), and I think even a majority of English people can find amusement in that.

What about the injuries to Rapinoe and Rose Lavelle, who limped off about an hour into the game? Will they be all right for the final?
What do I look like, a doctor? At this writing, the word coming out of USA’s camp is that they should be. In the meantime, Rapinoe’s partner Sue Bird had a piquant response of her own to Trump’s misogynistic homophobia.

Do we care about the third-place game?
As I’ve said before, it depends on how well the competing teams bounce back after losing in the semis. The winners of this game do get bronze medals to take home, which is something. In their losing effort, the Swedes proved once again what a royal pain they are to play against, but England’s offense is fearsome when it’s on. Plus, Ellen White has a chance to add to her goal total and finish the tournament as leading scorer. I think I would take England in a vacuum, and I don’t think any of the circumstances around this game changes that.

Are the Dutch dangerous?
It depends which version of the team shows up for the final. The Dutch men have excelled at soccer for decades without ever winning the World Cup, and I’m sure the Dutch women would love to get there ahead of them. Netherlands won the European championship two years ago, and a win here would give them a claim to being the world’s best team. If they play like they played in 2017 or against Canada this year, USA will have its hands full. On the other hand, if they play like they played during the first 90 minutes of the semi against Sweden, USA will slice De Oranje into neat little supremes. The Dutch only started playing with urgency come the extra frame, and that won’t get it done against USA. Also, Lieke Martens had to be removed from the semifinal game when a recurrent toe injury flared up. If she can’t go, that’s the Dutch losing their best playmaker and a significant goal threat. Regardless, the Dutch haven’t faced an offense in this tournament even close to USA’s, and their defense will feel the duress.

What is a nutmeg?
The move that Lavelle pulled early in the game against England, in which she dribbled through the legs of Bright and fired off a shot that England goalkeeper Carly Telford did well to save.

Why is this move named after a warming spice?
The popular theory is that “nutmeg” refers to a male player’s testicles, which the ball goes close to during the move. However, some believe that it comes from the actual spice trade, where unscrupulous vendors used to pawn off wooden nutmegs as real ones on unsuspecting buyers. If you go by the popular theory, the term becomes problematic when it’s applied to the women’s game. Let’s go with the other theory, because coming up with a new name for the move just for the women is conjuring horrors in my mind. Tobin Heath is known for her skill at this move, but Lavelle showed that she can do it, too.

Any last words?
Our condolences to the family of Florijana Ismaili, the Swiss soccer player who would have been at the Women’s World Cup had her nation not lost a playoff to the Dutch. She drowned in a swimming accident in Italy this week. While we’re extending condolences, we also send them to the visiting Los Angeles Angels over the loss of their pitcher Tyler Skaggs. Like Mike Trout said, sports aren’t life. Life is life, and these athletes are gone too soon. 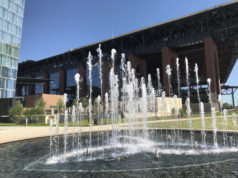