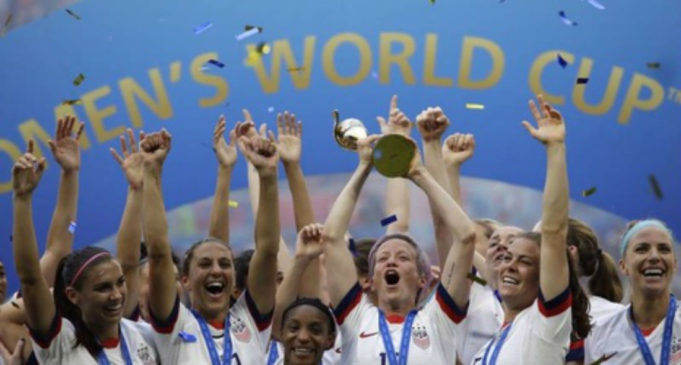 In international soccer, a star on a national team’s uniform denotes a world championship. Thus, the German women’s uniform looks like this, while the Brazilian men’s jersey looks like this. Going forward, USA will lay a fourth star on its uniform after its 2-0 win over Netherlands. Let’s wrap things up here.

What is the legacy of this Team USA?
In a single-elimination tournament like the World Cup, I’ve seen so many great teams sunk by a single bad call, bad bounce, or ill-timed injury. For USA to win three World Cups and as many Olympic gold medals in the past 20 years is just astounding, especially when considering the level of competition they’ve faced. Our nation’s basketball teams (men and women) have had an even stronger grip on international titles, but that’s because no other country runs USA close in terms of talent. The U.S. women’s soccer team has repeatedly faced down opposition full of all-time greats, and more often than not, they’ve prevailed. There’s never a guarantee that this run of success will continue — Uruguay was once a superpower in men’s soccer, and look at it now — but we’ll look back on this USA team and say they set the standard for the sport.

Is Megan Rapinoe the greatest gay athlete of all time?
That’s a good question, but before we get to it, we should remember that World Cups tend to be stamped by a single great player: Pelé in 1958, Diego Maradona in 1986, Lothar Matthäus in 1990, Zinédine Zidane in 1998. Given that Rapinoe won the Golden Boot award (tournament’s leading scorer), the Golden Ball (most valuable player), and Player of the Match for the final, you’d be hard pressed to argue that this World Cup belonged to anyone except her. As for the greatest LGBT athlete, Billie Jean King and Greg Louganis were more dominant in their individual sports, but they were both forced into the closet by more restrictive times. We’ll probably need 20 years to properly assess Rapinoe’s impact, but don’t underestimate what it means to have the best player at the World Cup be a butch lesbian with short purple hair who speaks her mind on social issues, is engaged to another woman, plays with her combination of abandon and precision, and cites her sexuality as a source of strength. If you think homosexuality has nothing to do with athleticism, I say it takes steadiness of nerve to convert three penalties without a miss and deliver accurate corner kicks and free kicks. You can’t tell me that Rapinoe being secure in her own identity didn’t contribute to her performance on the pitch when the stakes were highest. We’ve seen gay athletes before, but never one who was gay in this specific way. In my last post, I called her Team USA’s gay spirit animal. I’ll take her as my gay spirit animal, too, and I don’t think I’ll be alone in that.

Who is Jaelene Hinkle?
I jabbed at her in an earlier post, but it’s worth rehashing. She probably would have started at the left-back spot for USA in place of Crystal Dunn, but in a friendly match, she refused to wear a rainbow-colored pride jersey that the U.S. team was wearing just for that game, citing her Christian faith. Here’s where I point out that Julie Ertz is also a devout Christian who has voiced no objections to playing on the same team with lesbians, and her play in defensive midfield was a key to USA’s winning run. Her previous experience as a central defender allowed her to drop back into the defensive line when USA had the lead. This USA team is as good as any men’s team I’ve seen when it comes to game management (you can call it “protecting the lead” or “killing the clock”), and Ertz’ calming influence kept the squad on track. In the meantime, Hinkle presumably had comfortable seats in her home to watch the games.

Can Jill Ellis coach the U.S. men now?
She has my vote. The men lost the Gold Cup final the same day as the women’s final to Mexico and Tata Martino, a coach familiar with America who could have been hired to coach USA instead, only the federation rejected him for a native English speaker. U.S. Soccer probably isn’t ready to pull the plug on Gregg Berhalter, but I would trust Ellis to lead a World Cup qualifying campaign more than him. She has now repeated as World Cup champion; the only coach to do that on the men’s side was Vittorio Pozzo, who accomplished it with Italy more than 80 years ago. I would have liked to see her give more playing time to Lindsey Horan and Mallory Pugh, but it’s awfully hard to make criticism stick to a coach when her team just keeps winning. One last note: In your face, Hope Solo.

Spare a word for the second-place team.
The Dutch made me look like a genius for predicting them as a dark horse. More importantly, they cemented their status among the world’s elite in this sport, and if their offense never looked quite as good as it did during the team’s winning run at Euro 2017, they still put in an impressive display against USA, becoming the first team to hold the winners scoreless through the first 15 minutes. That deserves a cry of “Hup Holland Hup!”

What were the best goals of Women’s World Cup 2019?
I will embed video screens as they become available, but here’s what I have.

10. Rose Lavelle (USA) vs. Netherlands
Just Rose Lavelle doing Rose Lavelle types of things. She’s the future of USA’s midfield, and fans could get used to stuff like this.

A beautiful solo effort doubles the @USWNT's lead in the #FIFAWWC final! pic.twitter.com/ToznvQiuxb

9. Thembi Kgatlana (South Africa) vs. Spain
If you’re going to score your country’s first-ever goal at the World Cup, make it a good one.

8. Megan Rapinoe (USA) vs. France
She’s trying to put the ball in a spot where a teammate or even an opposing defender can deflect it in, but she’s rewarded for aiming at the far post. Cue the iconic celebration.

DREAM START FOR THE USA!

Megan Rapinoe scores from a free kick to give them a 1-0 lead on France early. #FIFAWWCpic.twitter.com/qOgYBPEx9d

7. Amandine Henry (France) vs. South Korea
And a shot from deep is one of the Lyon midfielder’s specialties.

WHAT A STRIKE BY AMANDINE HENRY 😳🚀 pic.twitter.com/FwXfNZWYJ6

6. Flor Bonsegundo (Argentina) vs. Scotland
It helps that this is part of the greatest comeback in Women’s World Cup history, but it’s worth savoring on its own.

5. Barbara Bonansea (Italy) vs. Australia
Extra credit for stealing the ball to create this breakaway.

Barbara Bonansea makes Australia pay for a mistake in the back and scores Italy's first #FWWC goal in 20 years. 🇮🇹 pic.twitter.com/Svh2PawLBc

4. Yeo Min-jee (South Korea) vs. Norway
One of those team goals where seemingly everyone touches the ball before it goes in the net. Great finish, too, with the striker being dragged to the ground.

Yeo Min-ji takes one back for South Korea!!!

Peep that back-heel nutmeg to set it up 👌👌👌 pic.twitter.com/oWn4HnOeNC

3. Ajara Nchout (Cameroon) vs. New Zealand
Poor Ria Percival has her soul faked out of her body on this goal that kept Cameroon alive for another round.

2. Lucy Bronze (England) vs. Norway
Just like you drew it up in practice. If the net doesn’t catch this, the ball is still flying.

Does this @England rocket get your vote for @Hyundai_Global #GoaloftheTournament? 🗳

Lieke Martens' backheel flick nutmegs a defender on the way in for the 1-0 lead. #FIFAWWC pic.twitter.com/ODGAxrvzAj

Where will the 2023 Women’s World Cup be held?
We don’t know yet. Usually, the site of the next World Cup is already determined by the time the present tournament takes place, but the bidding process is still ongoing, likely because of all the FBI prosecutions of FIFA’s top executives. Of the countries in the running, Japan has unbelievably never had the honor of hosting, and they have plenty of stadiums from the 2002 World Cup that are barely being used. Australia would be a fantastic host. South Korea is talking about co-hosting with North Korea, which would be, um, I’ll settle for the word “interesting” for now. When the possibility of holding the tournament in North Korea becomes more definite, I’ll have other words.

What will change?
FIFA wants to expand the field to 32 teams, the same size as the men’s tournament. This might lead to more Thailand-style bad losses, but this year’s tournament probably would have been improved by the inclusion of Denmark, the 2017 Euro finalists who are likely the best team not here. FIFA also says it will double the prize money, which sounds generous, but as Rapinoe points out, it will still be a tiny fraction of what the men will play for. The players’ pay dispute with U.S. Soccer will be mediated at some point, but now the women have a repeat World Cup title, record jersey sales, and evidence that their matches earn more than the men’s team on their side (to say nothing of the fans chanting “equal pay”). These things will be resolved another day. Right now, Team USA is having another parade in New York on Wednesday, and this one won’t have any army tanks in it. Hope you all enjoyed the tournament as much as I enjoyed blogging about it. 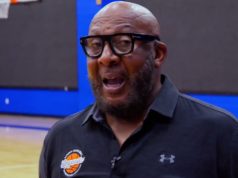