When Tina Howard and her husband opened Leaves Book and Tea Shop one year ago, the idea was to provide the community with a space to meet, mingle, and freely share ideas. In the year since, book lovers, authors, and discerning tea drinkers have become regulars at the cozy Near Southside book store and tea shop.

I recently met up with Howard at HopFusion Ale Works to chat about her newest projects. HopFusion was one of the first businesses to put Leaves’ tea on tap. The bartender recommended a blend of Feisty Blonde and Citrus Peach tea, something they call a “Feisty Leaves.” The results were delicious: The blonde ale was a little less feisty and a little sweeter.

Howard began toying with the idea of opening a book store in 2014, she told me. She described herself as something of a “serial entrepreneur.” Fort Worth lost two Barnes & Noble stores around that time.

“I was in a book club,” she recalled. “We were lamenting the lack of book stores. I wanted to do something a little different, so I researched the economics of opening and running an independent bookstore.”

To help draw foot traffic, Howard considered selling coffee. She soon realized that there was also an underserved market for high-quality tea. Boutique tea cafes are common on the East and West Coasts, but there were hardly any in Texas. Howard steeped herself in the concept by spending time in Portland, Seattle, and New York. She visited as many as ten tea and macha bars a day to see which aspects of the business she wanted to bring to Fort Worth. Howard exclusively works with tea distributors who source from individuals farms. The teas at Leaves are mostly organic and all are naturally flavored.

When Leaves opened last September, Howard had the duel task of representing and nurturing both the literary and tea-loving community. She doesn’t see one side of her business as taking precedence over the other. Both serve Howard’s goal of creating a welcoming community space.

Several reoccurring events have proven popular. Leaves After Hours offers specialty mocktails like the Mango TEAlini (mango and pear nectar topped off with sparkling Summer Mint tea) and live entertainment. An Afternoon with Authors includes a meet and greet with the authors, panel discussion, and a brief Q&A.

This Thursday as part of the Near Southside’s Third Thursday casual art walk series, Leaves is hosting Writer’s Bloc [sic]. The show will feature portraits of prominent local writers and writerly quotes from Fort Worth journalists, bloggers, and editors. The free event runs 6-9pm.

Howard is planning a series of literary panel discussions that will run concurrently with Fall Artsgoggle on October 19. On September 7, Leaves will have an all-day event to celebrate its 1 year anniversary. Customers who make purchases that day will receive a birthday card with a fun discount or offer from a local business. I’ll be looking for the $3 Feisty Leaves card. 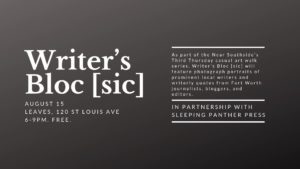