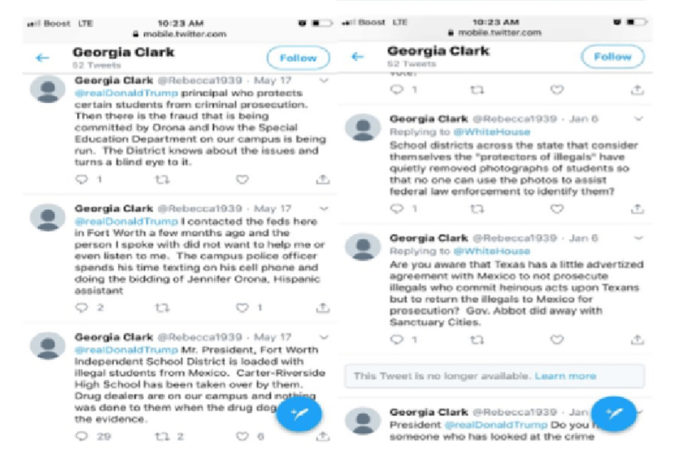 A Matter of Opinion

Since whether someone is racist is mostly a matter of opinion – unless you’re actively wearing a hood and sheet around town – we want to clarify some issues in last week’s column about a dismissed Fort Worth school district ESL teacher for things she tweeted – to the racially divisive U.S. president himself, no less. Along with the Fort Worth school district, who referred to Georgia Clark’s tweets and alleged past statements as “racially intolerant and/or insensitive,” and members of the public who were certainly offended by her entreaties to 45, our guest columnist, Ken Wheatcroft-Pardue, a former teacher himself, went on to describe Clark as “racist.” Clark, of course, disagrees – and she’s willing to go to court to prove it. On her side is an independent “hearing examiner” who found that her tweets and statements were not “racially insensitive and/or discriminatory” and determined that the district had no legal right to consider firing her. Whether or not she is let go, and whether or not a columnist may think she’s “racist” or merely prone to thumb-engaging mistakes, what she tweeted to Trump about “the illegals” at her school speaks for itself. – Anthony Mariani

Letter to the Editor

City leaders and officials have done little to nothing to encourage the development of infrastructure on the East Side, including attracting sources of healthy food for the community. To call “dollar” stores predatory is ironic, to say the least, since the only alternatives are a Walmart and Target Super Store that charge two and three times for the same items available at a dollar store, and neither of the Big Box stores is located near actual neighborhood streets. The photographs in your article are deceptive. Why not include a photo of a “dollar” store customer shopping on the toiletries aisle or aisles for laundry, school supplies, or canned goods and cereal? Dollar store patrons are smart shoppers. Many on minimal incomes, these Fort Worth consumers price-shop everything to save precious pennies for medical bills, bus fares, utilities, and taxes. I will be happy to give concerned city officials a tour of an East Side dollar store and point out items like milk, eggs, detergents, batteries, kitchen utensils, shoe polish, cheap toys and balloons for children, and a wide variety of “dollar” items other than candy and chips.

In last week’s Kulture, we misidentified the man in the picture. He is not the alleged murderer but the former boyfriend. We regret the error.