In four whirlwind years, the annual fundraiser BoobieQue has galvanized large swaths of the Fort Worth community in support of patients, survivors, families, and caregivers who have been impacted by cancer. As we chatted over beers and smoked meats at Heim Barbecue, event co-founders Dr. Emily McLaughlin and Carrie Carter described the origins of Fighting Right, the charity that plans and organizes BoobieQue.

Three-and-a-half years ago, Dr. McLaughlin, a plastic surgeon, underwent a double mastectomy and reconstructive breast surgery to treat her breast cancer. It was her first time being on the receiving end of a scalpel for a life-saving treatment, and she was surprised at several aspects of her cancer patient experience.

“I perform plenty of reconstructive surgeries, but cancer comes with many unknowns,” she said. “The stakes are higher. When you wake up, you don’t know what news you will be met with.”

The day of her surgery, Dr. McLaughlin was surprised by how much of her day was spent alone. One nurse suggested that her husband, Jeff Knipper, would be more comfortable in the waiting room.

“When you’re going into something with so much uncertainty, you need stability, and sometimes that means someone who is physically there,” she said.

In the days, weeks, and months following her experience, she mulled over ways to change the cancer patient experience. Many of those issues would require changes in hospital policy, but Dr. McLaughlin and Carter decided to organize a fundraising event to support nonprofits that help cancer patients and cancer survivors. After six weeks of planning, the inaugural BoobieQue was held at Rahr & Sons Brewing Co. Members of the Rahr family along with Travis and Emma Heim were early supporters of the idea. The event raised $80,000.

“We really didn’t know” we would raise so much money, Carter said. “We knew there were people out there who needed help. We pulled it together, started making phone calls, and it worked.”

After bringing on Matt Wallace as the third board member (along with Carter and Dr. McLaughlin), Fighting Right formalized its charity status. One early and ongoing beneficiary of Fighting Right’s fundraising efforts is Cancer Care Services, a charity that uses licensed social workers to connect cancer patients, caregivers, and survivors with resources that address their financial, emotional, social, and spiritual needs.

Dr. McLaughlin was quick to acknowledge that not every cancer story ends with the complete remission that she has experienced. Another recipient of Fighting Right funds is The WARM Place, a grief support center that offers services free of charge. One-quarter of children who benefit from the services knew someone who died from cancer, Dr. McLaughlin said. 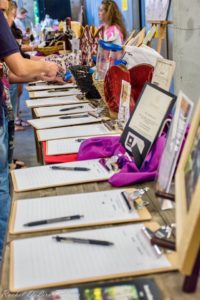 While BoobieQue is the most visible project Fighting Right organizes, the nonprofit has year-round events in the works. One potential program, “A Night With,” will feature notable individuals who have survived cancer or other forms of adversity.

This Sunday’s event promises to be the biggest and “boobiest” fundraiser yet. Reata Restaurant owner Mike Micallef is donating his personal portable roasting pit for the silent auction. The hooch wagon will come stocked with liquor and beer. Two tickets and airfare to see Jimmy Fallon live in New York City are also up for grabs.

Group games like Titty Toss (corn hole with tossable implants), Bra Pong (beer bong with bra cups), and Boobs or Butts (adult version of heads or tails) will come with big prizes for winners. Live music, beer, barbecue, and a mobile mammogram bus round out the offerings.

Dr. McLaughlin and Carter credit Fort Worth’s business community and residents for making BoobieQue the popular “philanthropy carnival” it is today. The majority of funds raised will directly aid laudable local charities while a smaller amount will be reinvested into Fighting Right so it can continue to be a catalyst for charitable giving in the years and decades to come.

“One person does not have cancer,” Dr. McLaughlin said. “Everyone in their orbit [effectively] gets cancer.”

She’s been heartened to see how Fort Worthians have shown up and opened their wallets and purses to support cancer patients and their loved ones.

“It’s been a ripple effect of support,” she said.

On Tap this Week 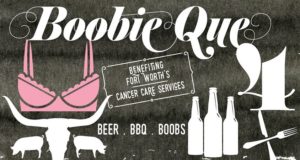 BoobieQue features a full day of Rahr’s ice-cold beer, delicious Heim Barbecue, sweet treats from MELT Ice Creams, amazing live and silent auctions, and games! Each year, the 501(c)3 raises more money than the last to support patients, survivors, families, and caregivers who have been affected by this life-threatening disease. Visit the event page here.