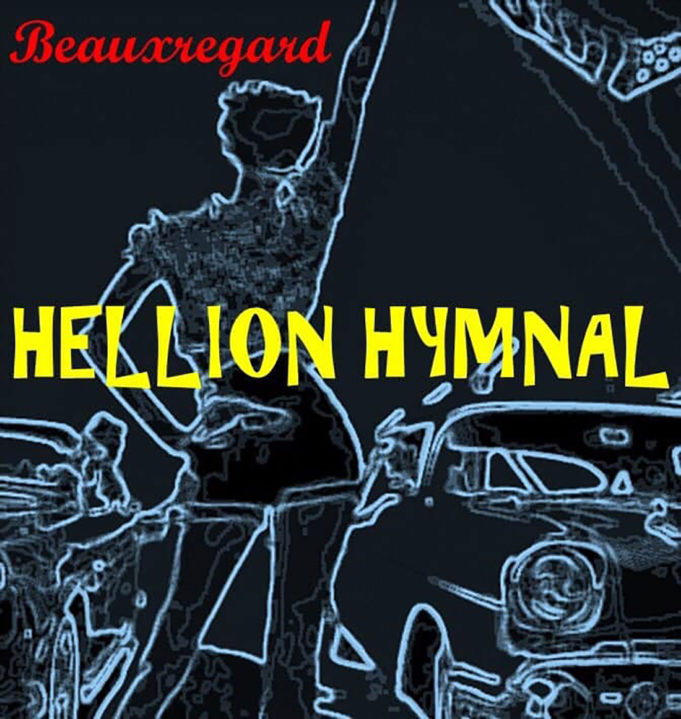 Beauxregard is an interesting band. Given principle songwriter J. Quincy Romine’s fascination with spaghetti Westerns, derby hats, and Fort Worth’s wild, gunslinging past, combined with his band’s mélange of moody roots music, theatrical Americana, and krautrock, trying to pin down what they sound like is a fun challenge. At first listen to Hellion Highway, a five-track collection of newish and unreleased Beauxregard songs, my pigeonholing app suggested Squirrel Nut Zippers + Stereolab. The next time, it was that sum with a little bit of Flaming Lips, because Romine’s voice occasionally swings into the upper reaches of his high tenor in a way that reminds me of Wayne Coyn, a notion underscored by the drum machine of the EP’s instrumental closer, “Epilogue.”

That song is “really old,” Romine wrote me in a message. “That was the song that kind of changed our entire direction as a band.”

Ryan Rhodes, Romine’s best friend and songwriting partner, who contributes guitar, were both “messing around” in Romine’s old studio one night, and they “wrote this song that made us think of UFOs over the desert. It was the song that kind of launched our Dark Western New Wave or Desert Noir sound.”

Desert Noir is an evolution of Beauxregard’s previous self-branded genre, Future Western. Compared to previous recordings, like 2010’s Gryphoemia –– which sounds like if the Killers recorded an album immediately after becoming obsessed with Calexico –– Hellion Highway leans a lot harder on Beauxregard’s cinematic influences, giving the synth swells and the drum programming’s metronomic underpinning supporting roles, rather than more prominent billing. With the guitars and Romine’s voice as the stars, Hellion Highway feels like the right road for the singer’s ghost-and-gunfighter-populated imagination.

Romine doesn’t really count the EP as an official release, however. “We recently made public some previously unreleased songs on our Soundcloud page, and in all fairness, they are presented as an EP with cover art and everything, but they’re not available anywhere but there,” he wrote. “I don’t know if that really counts as a release.”

He said they’ll be included in a full-album collection of what he calls Beauxregard’s “horror rock songs,” due out before the end of the year. If you’re into gothic, cinematic rock –– and now that I think about it, on a local music level, Hellion Highway is a must-listen for fans of Clint Niosi’s music –– the band’s current direction is right up your dark alley.

Romine said Hellion’s “Screaming Bridge” and “Sultan’s Palace” are both based on urban legends, while “I Just Crawl” uses similarly spectral imagery to make an allegory for the pains of letting someone go. “‘Mae,’” he conceded, “is just a sappy love song. The most noteworthy thing about it is that back when we recorded the vocals, I was challenged to do my very best Roy Orbison impression, so I did.”

The songs collected here are all pretty old, a couple of them dating back to 2012, which is unfortunately a function of Rhodes’ move to Seattle five years ago, and his absence, while obviously impacting the band in a physical, geographic sense, also makes Beauxregard’s forward motion difficult though not impossible.

“Ryan is my best friend and long-time writing partner, and it’s just not entirely the same without him around, but I could get past that with the right people,” Romine said. “He can definitely still take an active role in the writing process from up there.”

And Romine is open to finding the right people to continue Beauxregard.

“That’s what I’m hoping to accomplish with this actual, official release coming up: attract new bandmates,” he said.