In affluent communities, billboards are considered visual blight. Along Jacksboro Highway, many parts of the North Side, and East Lancaster Avenue, the massive advertisements are simply everyday reality. For the last year, the Modern Art Museum of Fort Worth has replaced vacant billboards with massive contemporary artworks and photographs. The new outreach program, Modern Billings, aims to pepper blighted communities with thought-provoking artworks while giving opportunities for local artists to engage with the broader community.

The program is managed by the Modern’s two assistant curators of education, Tiffany Smith and Jesse Barnett. Last year, staffers with the Modern began exploring the possibility of utilizing vacant billboards. The staffers at Clear Channel Outdoor, the company that owns many of the billboards that dot Fort Worth, were receptive to the Modern’s initial proposal, Smith said. The agreement was straightforward: Clear Channel would provide several billboards for several weeks at a time, and the Modern would curate the process.

“The objective is to spark curiosity and thinking and to disrupt what is always present there,” Barnett said.

Barnett and Smith chose to use artists who have already collaborated with the Modern. Many of the painters and photographers have contracted to teach at the museum’s continuing education programs in recent years. The first series featured six artists: Kalee Appleton, Kerry Butcher, Julio César Cedillo, Casey Leone, Raul Rodriguez, and Fabiola Valenzuela. Barnett said that “pilot series” validated many aspects of the project. The artists were enthusiastic.

Barnett and Smith said they give generous artistic freedom to the submitting artists. Sometimes, the collaboration begins with a batch of proposals from the artist. Barnett and Smith then provide feedback. Some initial suggestions may have text that needs to be enlarged, for example. The majority of viewers will be whizzing by in automobiles, Smith noted. For an image to work within that tight timeframe, the artwork has to be eyecatching and engaging.

Taking a guerilla marketing approach to presenting artwork has advantages, the curators said. Documenting public feedback isn’t one of them. From the beginning, Modern Billings was envisioned as a community outreach project and not as an opportunity to advertise. Barnett and Smith decided to leave the artworks unbranded, meaning you won’t see the Modern’s logo on any of the billboard-based pieces. Smith said the semi-anonymous approach works because it serves the museum’s ethos.

“Our mission is to bring people in front of the artwork,” she said. “This is a way to have it out [where it can be experienced] and not on an iPad. Installing art in the community is a natural branch-off of that goal.”

Wind, rain, and the elements demand periodic touch-ups, the program coordinators discovered. For the second run earlier this year, Barnett and Smith made two copies of each work so the artists could retain an un-weathered version. The third iteration of Modern Billings launches later this week. The final locations haven’t been finalized, but the program organizers are tinkering with the formula now. Two artists will each be given three nearby billboards. The idea is to add a narrative element that can unfold in time. The Modern chose Alicia Eggert and Audrey Travis. Many of Eggert’s works imitate signage, often through the use of neon lighting. Smith saw that as a perfect background for the project.

Travis’ “works deal with representations of landscape and material in space,” Barnett added. Modern Billings will place Travis’ pieces in an urban landscape, which “juxtaposes with the desolate areas” she portrays.

Barnett and Smith plan to schedule three to six Modern Billings programs per year with each outdoor exhibit lasting around six weeks. The still-new program has room to grow, the curators said. They are open to the idea of letting young students, possibly from the Modern’s Teen Artist Program, collaborate on a project that could potentially end up on a billboard.

Communities that have ample vacant billboards tend to rank lower on the socioeconomic rung. Fort Worth isn’t the first city to explore placing art in traditionally commercial spaces. The visibility of the elevated backdrops allows the Modern to make a big impact without incurring exorbitant costs.

“In the communities we [are targeting], you see a lot of cash for houses and more predatory advertising like payday loans,” Smith said. “It’s everywhere. Why not put art up instead?” 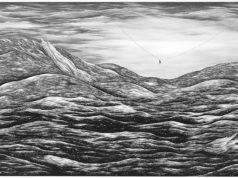