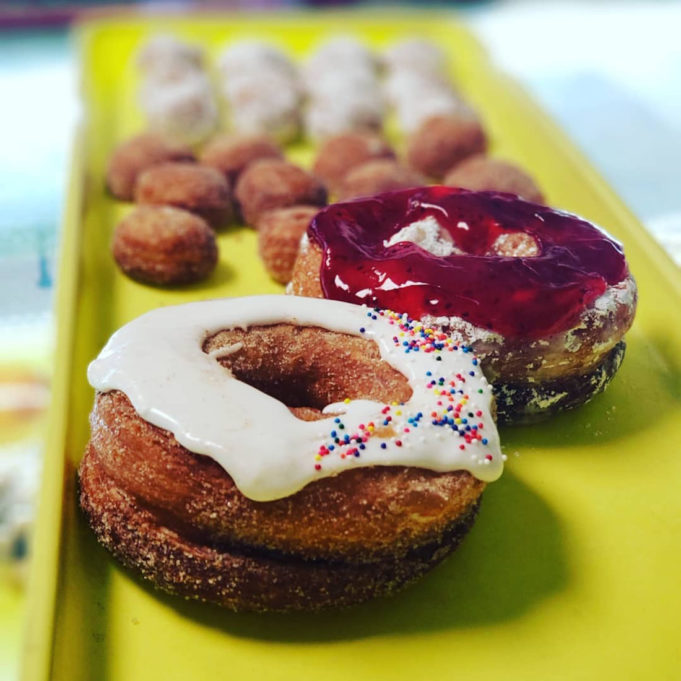 I came into the office today with the intention of cranking out one of those generic “Here are the restaurants that are opening next year” columns. Every outlet writes the same story around this time of year, and, though I think readers probably appreciate those kinds of forward-looking half-lists, I just couldn’t muster the excitement to pen something you could read in 40 other rags and websites. Mine would have been way funnier, though.

Instead, I want to tell you about something remarkable that happened to me on this and many other mornings. The fact that I consumed several donuts and cups of coffee at A&H Donuts (3412 W 7th St, 817-882-9011) isn’t by itself notable. I visit the 7th Street strip-mall confectionary occasionally when I need a sugar rush, to supply the food for some inane meeting, and/or just to grab a decent cup of coffee that doesn’t cost $8. I don’t frequent the shop, but it’s unquestionably my go-to spot. There are a few other donut places around the Weekly’s Monticello-area office, but I’ve bonded with A&H for one very important reason: The kindly older man who works the counter makes me smile.

The man, who I’m guessing is well into his 60s or even 70s, carries himself with a grandfatherly kindness and greets you with the sort of genuine enthusiasm you’d expect from a cherished relative you hadn’t seen in years. Just from the looks of him, you get a sense that he’s the quintessential Jungian Wise Old Man archetype: caring, thoughtful, a treasure trove of interesting stories, and possessing an almost mystical sense of wisdom.

As you walk into the tiny shoebox of a storefront, you’ll see him busy mopping, cleaning, organizing, or something. Always. The guy has a work ethic that oozes passion and pride. Once you order, he’ll scramble like hell to get a full box of donuts or whatever into your hands –– and you’ll always find more than you ordered in your box or waxy bag. Though he’s fast, he’s far from careless. And he’ll smile the whole time.

I don’t know if he’s beaming with job satisfaction or if the hard-earned assiduousness of living out his immigrant dream is manifest every time he opens the register, but that smile is contagious and his sense of accomplishment envious. I wish I could derive from my job half the pleasure he exudes from putting donuts in boxes and interacting with customers.

I find it fitting, nay, poetic that of all the turns his life has no doubt taken, he landed in the donut game. Free donuts were handed to the huddled arrivals at Ellis Island, to lines of hollow-cheeked men during the Great Depression, and to soldiers on the battlefields of the First World War by Salvation Army volunteers who requisitioned helmets as deep fryers and punched holes with spent artillery shells. Its pleasures are prehistoric — fossilized ring-shaped cakes that have been unearthed date back 8,000 years — and democratic. Dough, fried. It is a humble snack but one on which most of us can agree.

I do, however, have mixed feelings about the recent explosion of styles and shapes, which sometimes threatens to capsize the whole idea of a donut. At heart, I’m a purist — albeit not immune to the appeal of the zanier specimens.

You won’t find much in the way of frills at A&H Donuts. That’s not what brings me back there. My New Year’s Resolution is to be more like that guy –– and maybe learn his name.