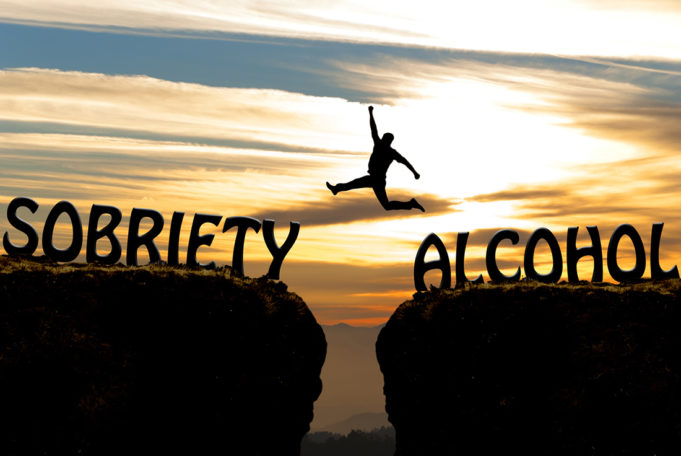 I was reading this moronic, regressive, rotten, insulting article the other day calling the Sober Movement (a trivial nomenclature) a fad, that people are getting sober because it’s the hip, cool thing to do right now. This type of article is trying to subvert sobriety, a positive and necessary change for millions. And if someone gets sober because they want to be hip and cool, who cares? Why contribute negativity to a worldwide epidemic?

The Sober Movement isn’t a fad, and the writer is a moron for thinking it is. Avalanches of people have been getting sober for decades. It’s just not brought up casually in conversation because there’s a stigma that if you’re an alcoholic, you must have a lot of problems, which is unfair and not true. Millions are alcoholics and don’t even realize their drinking is a problem. (More on that in a moment.)

In AA, you learn that discussing your and members’ sobriety publicly is forbidden. It’s also implied that discussing it with others outside the group is frowned on (one reason, of many, why I don’t like AA). Sobriety should be celebrated. I would shout it at the top of my lungs on the highest mountain if Texas had a mountain or a hill at least 10 feet high that wasn’t cow manure or dirt.

Social media has given celebrities and nobodies like me a platform to talk about our mental health as well as sobriety. We are speaking out for myriad reasons, and here are two: We are people who have always been open about our lives, and we want to let others know they’re not alone in the fight to stay sober because we are also struggling. Sobriety is not easy. No major life change is. While maintaining sobriety and the struggles that come with it is perfectly OK, the more who open up on social media with a little note just celebrating their sobriety, the more your quick-but-powerful post will encourage and inspire your friends and peers, as well as others suffering, because this helps people realize that they are not alone. Getting sober is hard and scary and weird, and millions are dying at an alarming rate of alcoholism. What’s terrifying is many do not realize they are drinking more than their bodies can handle. Millions may not struggle like real alcoholics do. However, drinking is a large part of our culture. Once off work, we often go to unwind at a favorite local bar with friends for a few drinks — this will eventually catch up with you. Get off work, meet pals at a bar, rinse and repeat. After a while, the sauce begins attacking your liver and kidneys without you feeling or realizing it. If you’re going to the bar every day after work, this is a problem.

By the time you read this, I’m a little over one year sober. That’s a sentence I never thought I would write. Thanks to the Fort Worth Weekly, I was able to write an article about my struggles and confusion with alcohol and how long I was struggling with it back in August — I got all my demons out in that article, things I’ve been wanting to say for years but needed to wait until I had some conviction to back up my story. I finally got sober on December 19, 2018. I would tell you about the night when I realized my time with the sauce was over for good, but we’ll save that for the memoir Chase Whale’s Wonderful, Horrible Life. Coming soon. Maybe.

The question I am often asked is, “So what have you learned since getting sober?” The answer is “a lot.” However, I have only so much room to write about it here. My problems didn’t go away and in fact felt worse because this time I didn’t have something to blame for my actions, couldn’t put them on hold while I drank away my pain, and I couldn’t deal with them while my mind was polluted with Maker’s Mark. (I was a cheap drinker.) Staying sober during troubled times is very challenging. Billions have been doing this for decades, so you and I can, too. I had to learn how to deal with situations that would set off my panic attack or depression alarms with a clear head. Dealing with real issues sober is not easy, especially when I spent decades handling them not sober. Over time, I have learned ways to calm the storm when frogs are falling from the sky.

Maybe the hardest of all challenges — I had to relearn how to socialize. No more liquid courage or bars, and I live in a time when most socializing takes place at bars. Re-strategizing life is a part of sobriety. There are a lot of things you can do. Finding new ways to have fun just takes time to adjust.

The major disappointment with sobriety is realizing who really loves and cares about me. There are three types of people you know when you get sober. Two are the worst. The first are the barflies (also known as drinking buddies), people I thought were friends but were just people I had nothing in common with except that we both liked alcohol — they all disappeared when I got sober.

Then there are people close to me who judge harshly. They make snide remarks in an argument, humiliate me, and make me feel like a bad person for my past. I already 8-miled myself in the last article I wrote about my sobriety and have worked so hard to let go of — I let it all out. There’s nothing left, yet they still remind me in an argument of a specific time when this or that was said. Most of these people truly love me. They just don’t understand that their “tough love” isn’t tough love. It’s cruelty and pushing me away. These are the people I’d lie to if I relapsed in fear they’d make me feel rotten since they have plenty of times before. Some I’m not even sure if they do love me or if they feel they have to since we are related.

The ones who sympathize are the best and the ones to keep close. They know they can’t bother me too much about my sobriety because they know I’m giving it my all. They do check in and hang out, and alcohol is rarely brought up. These are the ones who know addiction is a sneaky beast but are your silent cheerleaders. They are there for me every step of the way and treat me like a human being when I’m sober or if I’ve relapsed. They know addiction is a disease that must run its course on its own. It’s going to kill you or change your life. Staying sober is a battle. This type of person understands this, and they don’t push.

The final — and perhaps the most important — thing I’ve learned is that my troubled past doesn’t define me. How I better my life using my missteps as a blueprint does. I had to forgive myself while on this journey of loss and enlightenment, and it’s something I’m still working on. The positive side is I’ve changed and grown. I’m not the same person I was the last 10 years. I still have my share of problems, except now I have a weapon to combat them — sobriety. This is my new normal. And you know that? That’s OK. I feel more alive now than ever before.

If you are trying to get sober and not sure where to start, reach out to me. I’m not hard to find. (Out of 7.5 billion people on Earth, there’s only one known Chase Whale — that’s me.) I will welcome you to the jungle. Getting sober is not easy, but it can be done (and, yes, we have fun and games — please don’t sue me, Axl).

If you need advice/help/somewhere to start your sobriety, reach out to Chase at chasewhale@gmail.com.