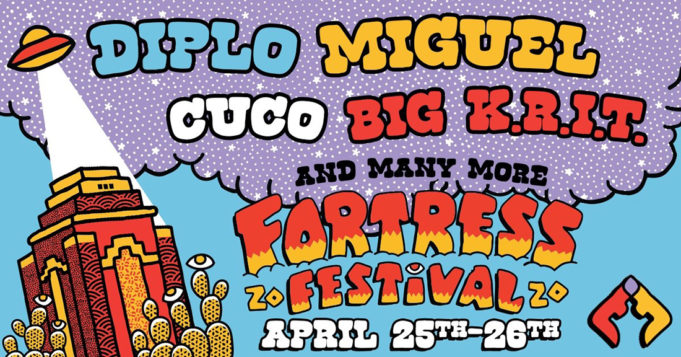 I don’t have any opinions about Diplo in the way that I don’t have any opinions about guanine or sheet rock. My assumption about him, true or exaggerated, is that he is more or less an important component of pop music’s modern forms, and so the announcement that he was the headliner for Fortress Fest’s 2020 lineup moved my meter in the way that hitting three consecutive green lights in a five-block trip might or when you find a fourth chicken strip in the bag when the #13 Whatameal normally comes with only three.

The promise of a Diplo performance did not make me want to rush out and buy a Fortress Fest ticket, but I also care to remember that it wasn’t too long ago when Fort Worth had no kind-of-a-big-deal music festival to call its own. Dismissing the two-day Fortress Fest over a performer or two is weird, more so when the list includes another 20-plus bands, rappers, and solo artists. Surely, some combo of those names might justify a ticket’s price point? Rounding up, two-day general admission is about $100, so you’re basically paying $5 per band, assuming you go both days and watch every set. Again, surely there’s at least two, maybe even three, artists a day who can justify spending a bill to enjoy what will hopefully be a gorgeous spring day listening to a mid-to-upper echelon of touring live acts.

Full disclosure: I’m playing in one of the local openers, but even if I were not the beneficiary of an artist wristband and therefore were a regular ticket-purchaser, these acts alone –– Combo Chimpito, Kero Kero Bonito, Big K.R.I.T., Free Nationals, and Wet, taken together –– justify the luxury purchase of a ticket. Certainly, I empathized with all of those sighing and rolling their eyes out of their unfamiliarity with most of the big-font names in the lineup, but then I remembered that there in my hand –– gleaming beneath layers of glass and scuffed-up plastic, an apparatus of dizzying technological sorcery –– was a green circle slashed by three horizontal bows upon a black field. If you don’t know those names, why not make a Spotify playlist about it?

I did. If you want to listen to it, I’m under Wizardvizion, and the playlist is named “In Defense of the Festival Lineup.” It’s basically the top songs from all 21 artists. What you’ll find, besides a sonic buffet that’s front-loaded with pop and rap, is a lineup that’s genuinely diverse. It’s almost as if the festival’s curators looked at the population of this city and said, “Some black and Latino artists would go over well, probably. Wow, and there sure are a lot of women. Maybe we should book some female artists, too!” While white artists still fill about half the lineup, it’s not just dudes –– six of those 10 are either women or have female band members.

If I had one criticism to make of this lineup, it’s that they booked a lot of mid-tempo, late-night vibes. Cuco, whose brand of shroomy dream-rap-en-español sounds like a pink crew-neck sweatshirt paired with a gold weed-leaf necklace looks, is not exactly high-energy. I’m of the mind that the inclusion of at least one heavy band adds a plus to any festival’s letter grade.

Overall, this year’s Fortress Fest lineup is a chilled-out cross-section of listening tastes, designed to appeal to a broad swath of the population. Maybe next year, the festival will cater to the haters’ exact specifications, but until then, I think they should cough up the cash and join the rest of us for a couple of nice days in April.