Since the Oscars are happening early this year, so is this annual piece of mine in which I write miniature reviews for movies from the past year that I never had a chance to write about. I won’t make the same mistake that I did last year. I’m reviewing Netflix’s Marriage Story and The Irishman instead of missing out on them like I did with Roma so stay tuned. 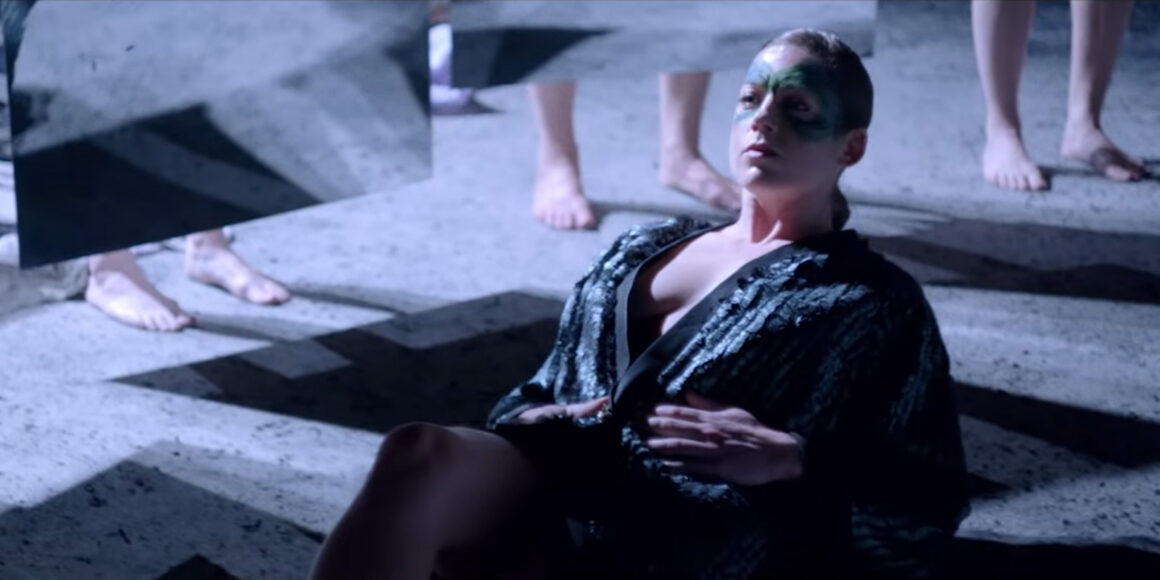 A rare movie based on an epic poem, this Swedish science-fiction film is a better version of Passengers. Based on a work by Harry Martinson (one of the least talented writers ever to win the Nobel Prize for Literature), the film is set on a cruise liner of a spaceship designed to transport people from a dying Earth to a colony on Mars. However, the ship is knocked off course and the passengers descend into chaos once it becomes clear that they’re going to keep going into deep space forever. The main character (Emelie Jonsson) operates a machine on the ship that immerses people in blissful memories of Earth, a machine that becomes increasingly overtaxed as the voyage stretches on. Touches like these will appeal to fans of thoughtful science-fiction.

In the honorable mention section of my top 10 list, I grouped this Chinese film with The Irishman because they’re both about the long-term damage that a life of crime can inflict on people’s lives. Jia Zhangke doesn’t have the profile of Scorsese, but if you’ve watched his previous films like The World, A Touch of Sin, and Mountains May Depart, you know how good he is at taut narratives amid depictions of ordinary Chinese life. A mainstay of Jia’s films, Zhao Tao portrays a gangster’s girlfriend who takes the fall and serves a five-year prison sentence for him on an illegal firearms charge. (Pretty much all guns not used by police or military are illegal in China.) Anyway, she expects the guy (Liao Fan) to wait for him, but he doesn’t, so she tries to make her own way after she’s released. Her attempts to do so in heartless capitalist China and her fraught continuing relationship with her ex make for gripping stuff. Also, the title is really cool.

If you’re looking for an offbeat horror film, this recent one fits the bill. Miles Robbins (the son of Tim Robbins and Susan Sarandon) plays a troubled college student named Luke who witnessed a mass shooting as a boy and invented an imaginary friend named Daniel to cope. Years later, his therapist tells him to resurrect Daniel, who’s played by Patrick Schwarzenegger (the son of Arnold Schwarzenegger and Maria Shriver). This is a big mistake, since Daniel starts telling Luke to kill people, including the therapist. Based on Brian de Leeuw’s novel, this movie has a terrific performance by Robbins. Too bad there’s a swordfight climax that’s too dopey to redeem. Even so, this movie has Mary Stuart Masterson playing Luke’s paranoid mom. I’ve missed her acting.

What was always offensive about the Magical Negro stereotype was that black characters always used their superpowers to solve white people’s problems. In this science-fiction movie, they use it to solve their own. On one level, this film is about a recovering addict (played by a great Gugu Mbatha-Raw) trying to be a mother to the daughter she abandoned. On another, it’s a film about a woman whose ability to control the weather might be the key to solving global warming. Director/co-writer Julia Hart does well juxtaposing the stripped-down setting to the bursts of supernatural activity, and she beat DC and Marvel to a superhero movie about a black woman. We should have heard about that more. Lorraine Toussaint’s understated performance as the protagonist’s mother is worth watching on its own.

What if Courtney Love had been Sleater-Kinney’s lead singer in the early 1990s? That’s what this music drama posits, as Elisabeth Moss plays the rock star who is so out-of-control that she punches her husband in the face while he’s holding their baby. This is by Alex Ross Perry, and you either love his movies or hate them, because they’re about deeply unpleasant people (usually played by Moss). I tend to love them. This is his most complete work. Over the course of several years, the protagonist suffers greatly for her transgressions (divorce, bankruptcy, agoraphobia) and eventually comes through it at a reunion concert for her band. Moss is sensational as a woman who learns when her myriad sins catch up to her, and a heavily female cast (Cara Delevingne, Agyness Deyn, Amber Heard, Ashley Benson) performs some credible-sounding songs. 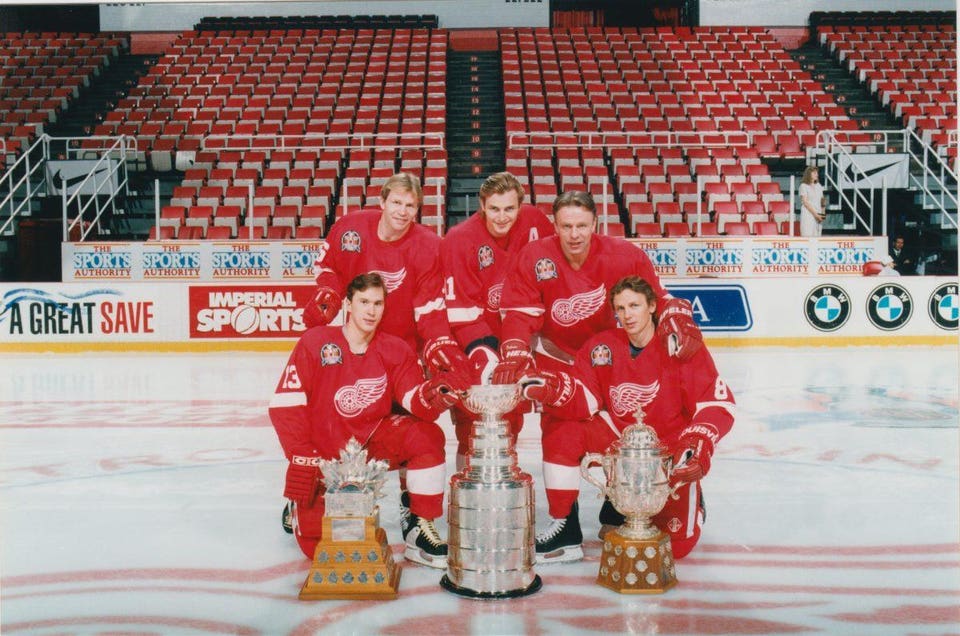 I was learning about hockey in the late 1990s, and the Detroit Red Wings were the bomb. Post-Cold War, that team was the first to field five Russian players at the same time, and besides their breathtaking skill, they all came with their own separate personalities. My favorite was Vladimir Konstantinov — the other four were all finesse operators, but Konstantinov was the guy who brought the hatchet. Joshua Riehl’s documentary chronicles how the Wings got these players out of the Soviet Union, how they won their first championship in decades, and how it ended tragically for Konstantinov. Besides the remaining four Russians, the movie also boasts input from Scotty Bowman, Steve Yzerman, Nicklas Lidström, Darren McCarty (the film’s best interview), and Wayne Gretzky just as an afterthought. This is a must for hockey fans.

I like Christian Petzold, yet while many film critics put this German film on their year-end awards lists, it didn’t quite work for me. He adapted this from Anna Seghers’ 1944 novel about a refugee who impersonates a dead writer to escape Nazi Germany, except that he sets the film in the present day, with characters using smartphones and police wearing SWAT gear instead of Gestapo uniforms. This is one of those films where I comprehend the filmmakers’ intentions on an intellectual level without ever connecting with it emotionally. The story moves efficiently enough, but I miss that ineffable aura of romantic desolation that comes with Petzold’s best movies.

Under the Silver Lake

David Robert Mitchell’s follow-up to It Follows isn’t a horror film, but it does make me think that he could adapt a Thomas Pynchon novel to the big screen. Andrew Garfield plays an L.A. conspiracy theorist who investigates the sudden disappearance of his neighbor (Riley Keough) and possibly finds a global plot involving various local monsters, a Goth rock band called Jesus and the Brides of Dracula, and the unidentified person who’s killing everyone’s dogs in his neighborhood. The conspiracy is too dense to unpack, but that may be the point, since Mitchell drops hints that his hero is just insane, as well as the dog killer. (He finds a couple of boys vandalizing another neighbor’s car and beats the kids almost to death.) I really like the nightmarish bit when the hero is horrified to discover an old man (Jeremy Bobb) who has written every hit song of the 20th century. “There’s no such thing as art,” the man says. “Just me earning a paycheck.”

We Have Always Lived in the Castle

This movie made me think that Alexandra Daddario might be able to act. She’s always been cast in parts that require her to look hot, but in this thriller adapted from Shirley Jackson’s novel, she’s terrific as a deeply delusional woman stuck in girlhood. The main character, her ineffectual uncle (Crispin Glover) and creepy younger sister (Taissa Farmiga) are visited by a cousin (Sebastian Stan). He’s the only character who acts like a normal person, which, according to this movie’s logic, means that he’s a very bad man. Director Stacie Passon finds a place somewhere near Jackson’s tone of a family of eccentrics who manage to exist in not-quite-isolation from the harassment of their neighbors. Daddario also plays Brahms’ Rhapsody in E minor, which I can respect. If you’re into lesbian camp laced with murder, here’s your film.