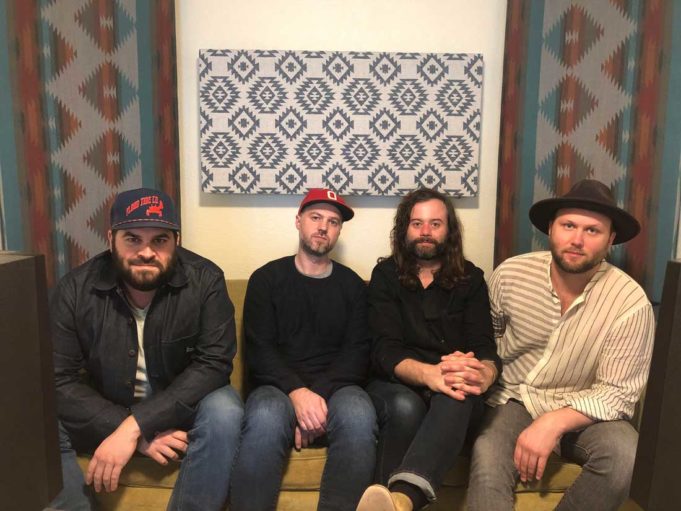 It’s not often that you find us taking the time to write about a band that hasn’t even played its first show, but when that band is made up of the former frontman of a recently dissolved local favorite and members of another beloved hometown outfit backing him, it’s worth spilling a few words.

Yeah Huh is the so-fresh-it’s-practically-sparkling-and-lemon-scented project featuring Ryan Taylor, the erstwhile singer/guitarist of Oil Boom, who is now being backed by three-fifths of country-tinged indie-rockers The Orbans. The playfully affirmative-monikered quartet will make their debut this Saturday at Shipping & Receiving Bar.

Yeah Huh is Taylor’s first new musical endeavor since Oil Boom’s dissolution nearly two years ago. There was no tabloid-worthy acrimonious break-up, Taylor said. The band’s critically lauded album –– 2017’s wise-cracking, air guitar-evoking Terribility –– failed to be the catalyst they had hoped it would. Taylor figured the band had run its course.

“It’s just the same band story that’s been told a thousand times,” Taylor said. “We’d just kind of run out of steam, then life gets in the way. Each member kind of had their own thing they were dealing with. I was in a band before Oil Boom for eight years [The Rounders], and for whatever reason, [eight years] seems to be the magic number for bands I’m in.”

Over the last couple of years, Taylor became a father and started grad school, working toward a master’s degree in counseling. He continued to write, but with the exception of occasional fill-in gigs playing guitar with a blues band fronted by Dustin Arbuckle, a friend of Taylor’s from Wichita, Kansas, Taylor had been mostly musically dormant. When Arbuckle inquired about coming to Fort Worth for a possible show at Shipping & Receiving, Taylor offered to open the bill.

“Then Eddie [Vanston, S&R’s owner] said, ‘Well, we’d rather have Ryan headline because he’s played around town a bit, and it’s [Arbuckle’s] first time here,’ ” Taylor described. “I had originally been thinking of, like, a solo acoustic thing, but I didn’t want to follow a band by myself because, well, that doesn’t sound like much fun. I had been thinking about doing another band anyway, so it was sort of the impetus I needed to get something going,”

Though Yeah Huh is a brand new project, the seeds of it began more than eight years ago. In 2011, Oil Boom had moved into a rehearsal space at Blue Smoke Studios that had previously been occupied by The Orbans, who had moved into a larger room next-door. As neighbor bands often do, the two groups would chat during breaks, complimenting each other on new sounds or inquiring about what gear they played, and a friendship between them began. Oil Boom would even accompany The Orbans on short out-of-town swings.

Eventually, at Orbans guitarist Kenny Hollingsworth’s suggestion, Taylor began jamming with him and fellow Orbans –– drummer Jordan Elder and bassist Cliff Wright. They worked out a few unused songs Taylor had lying around, but nothing ever came from the initial collaboration. A recent reconnection between Hollingsworth and Taylor –– and the specter of a looming show –– re-ignited in Taylor the idea to work with the Orbans fellows again. Taylor offered a list of 25 songs, and the newly formed quartet selected 15 to have ready for the show. The material represents an exciting new direction for Taylor and for the Orbans dudes as well.

“It’s not so different that you’ll be like, ‘Whoa! I never knew this guy existed,’ ” Taylor said of the band’s sound. “But it’s different enough. It’s definitely not just a rehashed Oil Boom or rehashed Orbans.”

After a sneak peek at some demos of the songs the band has worked out, I can say the tunes appear more contemplative and introspective than much of Oil Boom’s catalogue, with Hollingworth and the rest providing a tasteful and well-developed sheen on top of Taylor’s newfound poppier sensibility, something he credits to his stage in life.

“The lyrics are a little bit more personal, maybe,” he said. “I’ve done some living in the last couple of years. I had a daughter. That stuff kind of works its way in some way.”

Yeah Huh will share the stage with twang-tinged crooner Jake Paleschic and the aforementioned Dustin Arbuckle with his backing band, the Damnations.