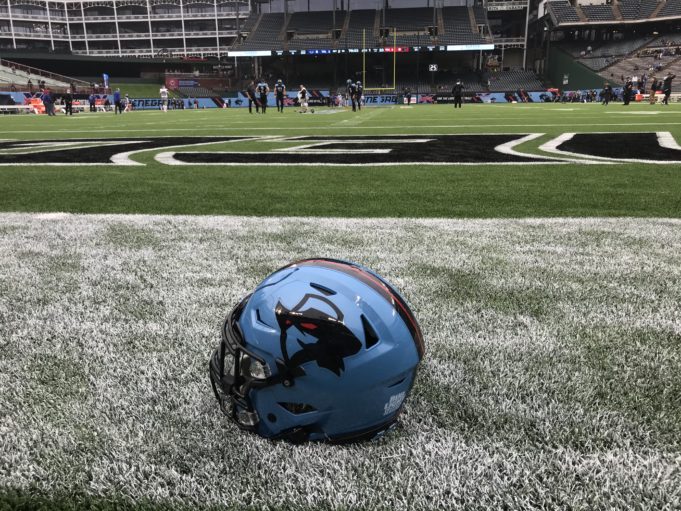 What teacher would assign a history test on a Sunday?

We’re actually talking American professional football here, so historically speaking, that game is played on Sundays.  The Dallas Renegades’ players who took the field this afternoon probably were able to remain in the present. They needed to focus on the immediate need to throw and catch and avoid being pancaked. However, everyone associated with the franchise and the league hoped they would, in the long run, have made history. 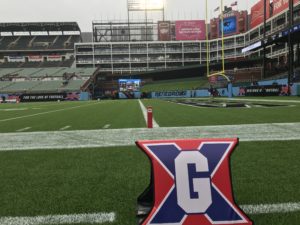 The first game of any franchise should feel like a milestone. You want fans years from now to be able to say, “I remember watching that first game and now look at all these division/league titles.” The Renegades played the St. Louis BattleHawks at a venue that has hosted World Series games and the 1995 Major League Baseball All-Star Game. Globe Life Park in Arlington has a pedigree. But it had never hosted a big-time sporting event other than baseball, unless you count the Rangers’ company softball tournaments (I played in a bunch of those and no, they don’t count). 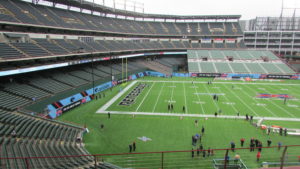 The area also has a strong football tradition they’re trying to join. The neighboring AT&T Stadium regularly draws 100,000 people for gridiron contests. But, unfortunately for the ‘Gades (is that a reasonable abbreviation?), the Dallas Cowboys probably aren’t the model they can realistically emulate. They need too study, and learn from, others. I remember another Tarrant County pro team that lasted only the 1994 season: The Fort Worth Cavalry of the Arena Football League. They made the playoffs, but playing mostly weekday games at the less-than-picturesque Fort Worth Convention Center (then known as the Tarrant County Convention Center) and other missteps doomed them despite fielding a playoff team. At least the new team has secured weekend dates.

The AFL finally folded this past year, and the Renegades themselves have league baggage to deal with. They play in the revived XFL, a version of which had a one-season run itself in 2001 (North Texas did not have a team in that incarnation). The circuit ended operations enmeshed in a cloud of financial losses, low television ratings, and ridicule of its on-field product. The failures of the USFL, the AAF, and even NFL Europe (among others) have made many skeptical that professional football below the top level can thrive. The closest any startup leagues have come to success were the All-American Football Conference and the American Football League, and their endgame ended up being mergers of sorts as teams were absorbed into the NFL. Those transactions happened in the 1950s and ‘60s.

As it turned out, the Renegades have passed this history test so far. The renovations the stadium underwent made it workable for football. They painted the new turf field Friday and despite worries that wet weather would cause it to smear, it held up well. Those of us who spent a lot of time in that facility in years prior got a bit of culture shock noting the absence of the third base dugout and the presence of new s 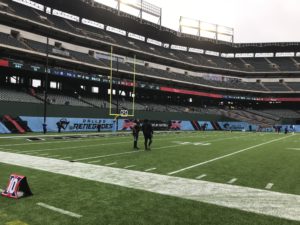 tands in what had been left field. But it worked fine. In fact, I had some friends sitting in section 15, near the north end zone, and those seats get you as close to a football field as any I’ve ever seen. Official attendance came in at 17,206. Judging by the backup at the concession stands, that figure exceeded expectations,. Hey, the Cowboys had two crowds smaller than that in their first season (which was played in 1960 at the Cotton Bowl stadium).

All four XFL crowds on the league’s opening weekend landed between 17,000 and 18,000. Early indications are that TV ratings on ABC, ESPN, and FOX were decent for yesterday’s games. The question will be whether they can sustain those figures. The 2001 XFL started off with strong TV viewership and then experienced a substantial drop-off. That league also, for the most part, averaged larger attendance numbers than 2020’s Week 1. Hopefully, for their sake, the new league will maintain what seems to be a strong start and trend upward. 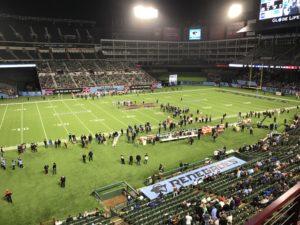 The Renegades had brought in a head coach with a collegiate national championship in his past, former Oklahoma head man Bob Stoops. They came into the season as a betting favorite, but lost without scoring a touchdown on Sunday. The defense played well enough to keep the game close, however, and it wasn’t decided until the final minute. The crowd, as nearly as I could tell, enjoyed itself. Perhaps they had enough fun despite the final numbers on the scoreboard to buy tickets to the next home game in March 1. They’ll need to keep up the momentum if they want to make history, not fade into it.