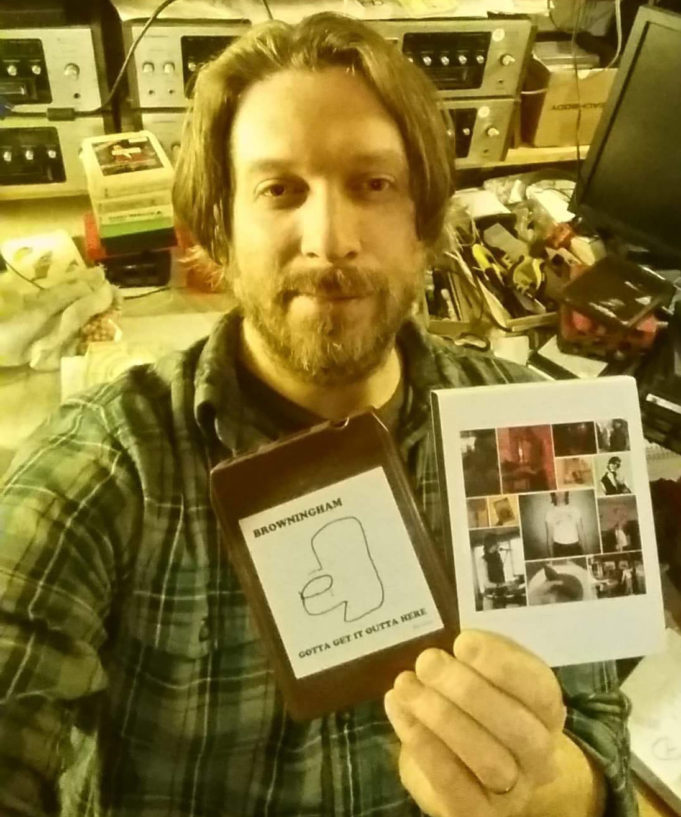 Fifteen years ago this month, ’80s action score-esque synth-maester Nathan Brown sat in traffic outside of the Brooklyn-Battery Tunnel in New York City, en route to the kickoff show for a tour promoting his first solo album. He was in a rush because he was still putting finishing touches on the mixes for the work he would call Browningham –– a title derived from a mash-up of his and his wife’s surnames (hers being Cunningham) –– until minutes before he left, causing him to already be running behind. Luck (whether good or bad depends on perspective) would intervene. The traffic delayed him so long he had no choice but to call and cancel the show.

Frustrated, he and his wife detoured to crash at a friend’s house close by. Because Browningham’s nine songs were produced on the mostly abandoned home studio technology of the day –– the hard disk recorder –– and were consequently bounced individually to CDs, Brown didn’t actually have a complete album in hand for the show anyway but rather nine separate songs on nine separate discs. During his stay, Brown used his friend’s computer to compile the songs and add some modest mastering, finalizing the album in the only format it’s ever existed on, CD-R.

Speaking of mostly abandoned technologies, Browningham has just received a 15th anniversary re-release through Brown’s label, Dead Media Tapes, on the conventional ’82 El Camino in-dash format, 8-track. And if fancy auto-play cartridges are too modern for you, you can also grab a copy on reel-to-reel. The songs have been re-mastered, some digital artifacts have been removed from the original, and bonus tracks have been added.

Through Dead Media, Brown has been doing small-run releases on 8-track and reel-to-reel since 2006, featuring area artists like Denton’s RTB2 and hometown psych-rockers Secret Ghost Champion, as well as being commissioned to do special runs for national labels for big-name acts like King Gizzard & The Lizard Wizard and a staggering 1,300-unit run for Swedish black-metal heroes Ghost. But the Browningham re-release is the first time he’s released his own music on his signature medium.

Don’t mistake the format choice for some trifle or as a way of capitalizing on America’s current obsession with nostalgia. Brown has a different reason for his loyalty to the format.

“Actually, I really dislike that stuff –– nostalgia or novelty things really bother me,” he said about his chosen media. “I guess I deal in it, which is funny.”

Instead, he feels tape –– even more so than vinyl, the current audiophile format of choice –– captures something special that flat, rigid, digital processing just can’t.

“I’ve actually become a bit obsessed with the ‘pseudoscience’ of it,” he said. “Magnetism is the weakest of the physical forces, but it’s one that still helps hold the universe together, so I thought maybe I should place some importance on listening to music on a magnetic format. With digital, no matter the sound quality, it’s still two-dimensional. It’s just volume and frequency. It made me think, ‘Are there other things that can be captured on tape?’ ”

He said the idea came to him from listening to old 8-tracks he bought with a player from a thrift store more than 14 years ago. Listening to them, he “sensed some sort of phantom energy” about them that he’d never noticed on other formats.

“It’s like when someone flinches, is it just some visual reaction to thinking you’re going to get hit, or is some small amount of energy from the motion being transferred in the swing?,” he said. “And does any of that [same type of energy], in some tiny degree, make it onto the tape, in terms of a musician’s performance or their energy in studio, like you’re always listening to a pure analog echo of that initial energy.”

If it exists, with Brown’s tapes some of that energy likely comes from the meticulous care he takes in making them. The reels are easy though expensive. New tape is still available for purchase, but 8-tracks haven’t been made for more than 30 years, so they’re recycled one-by-one. It’s not just a simple matter of dubbing over some unknown regional gospel choir’s music and slapping on a new sticker. Brown completely takes each one apart, cleans them, replaces parts, removes original labeling, and cuts (or adds) tape to proper length.

“I just really want it to be like a brand new cartridge,” he said.

He estimates each 8-track takes close to two hours of work to complete. It’s the kind of bespoke quality that justifies the hefty price point. Dead Media usually charges more than $30 per tape. Because he’s not having to pay an artist (for the first time, he is the artist), interested parties can purchase Browningham through his Bandcamp page on 8-track for $25 or reel-to-reel for $40