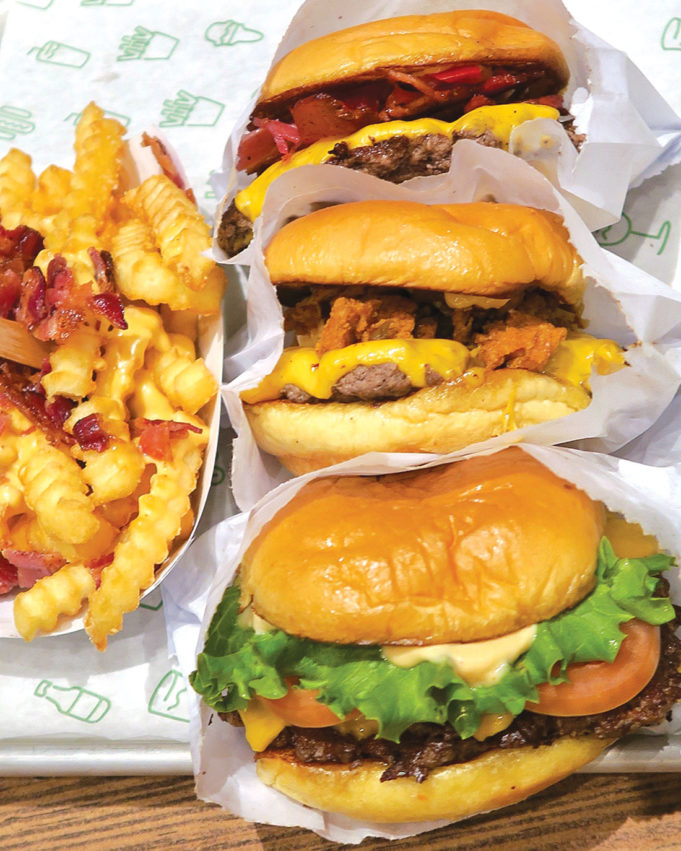 Two decades ago, a man with a hot dog cart started slinging wieners in New York’s Madison Square Park. The brainchild of now-famous restaurateur Danny Meyer took off, and the cart soon added burgers, fries, and shakes to the menu. Today, a fervent following of Shake Shack addicts find their gourmet fast-food fix in more than a dozen countries. It’s one of the fastest-growing restaurant chains ever — and Fort Worth can finally find out what all the fuss is about.

Shake Shack is the first outlet to open in Mule Alley, a focal point of the Stockyards’ ongoing revitalization efforts. A wander down the brick-lined walkway reveals empty spaces and construction projects, but it’s easy — and exciting — to imagine what the future holds.

Friday night found my guests and me strolling along Exchange Avenue with the tourists, the cowboys, and the electricity in the air. It was too early for anyone to be drunk, and the vibe was one of anticipation for the night to come. We shared the feeling as we sashayed into Shake Shake’s prime location, which is right across from Cowtown Coliseum.

The casual counter-service restaurant provides the option of ordering from a person or a computer. As an introverted food critic with control-freak tendencies, I like tablet ordering. I can examine all the menu options closely and double-check my order choices, free from the pressure that often accompanies counter service when a line of people begins stacking up behind you. And there was a line. There may be hundreds of Shack Shacks around the globe, but only one has legit rodeo cowboys chowing down on burgers in their silver spurs.

We started with the Shack-cago Dog as our appetizer. The zingy amuse-bouche’s super-snappy wiener had been split and griddled on the flattop. The dog nuzzled under an authentic Chicago-style slather of Rick’s Picks relish, mustard, onion, tomato, pickle, sport pepper, and celery salt.

I added extra pickles to the iconic ShackBurger. All the burgers are customizable and are served with single or double patties. Shake Shack uses buttered Martin’s Potato Rolls for its burgers and dogs –– the soft buns yield just the right amount of squish. The cheeseburger made believers out of us with its wonderfully simple yet high-quality ingredients. Each freshly ground, antibiotic-free Angus patty is a proprietary blend of brisket, chuck, and short rib. The ShackSauce sealed the deal, a thick ketchup-and-mayo secret with a tiny hint of heat.

Cherry peppers and applewood-smoked bacon revved up the SmokeShack cheeseburger, adding deep flavor and fire-engine color. For texture, the ShackMeister burger reigned supreme. Recently re-launched for a limited time only, the cheeseburger features crispy fried shallots marinated in Shiner Bock beer. The shallots’ sweetness played foil to the Shiner’s bitterness for a hands-down hit at our table.

The crunchy little shallots also appeared with a velveteen cheese sauce on the ShackMeister dog and ShackMeister fries. Shake Shack’s crinkle-cut fries kicked in the nostalgia, clinging to one another in a cluster of melty American cheese. We also loved the Chick-n Bites, crispy nuggs of tender sous-vide chicken with the same seasoned breading as the fried shallots. Alas, we had no room to try the Link Burger, a cheeseburger topped with Pecan Lodge cheddar jalapeño sausage.

We did have room to try one of the signature milkshakes, a light and frothy cookie butter shake with nutmeg and cinnamon. We also tried the Pie Oh My concrete, a dense dessert with a slice of blueberry Emporium Pie shoved into frozen vanilla custard. Shake Shack doesn’t actually serve Kool-Aid, but they did offer fresh strawberry lemonade.

No one at the table could think of one thing that we didn’t like about the food (crappy parking in the Stockyards doesn’t count). But we did notice a dearth of Fort Worth suppliers on the menu in favor of Dallas brands, including a “local beer selection” of four Dallas beers and Lone Star. Shake Shack is either still sorting out their local suppliers (totally forgivable), or their corporate overlords think that Dallas and Fort Worth are the same place (total cow manure). Hopefully, they will ameliorate the situation before my next visit.

And there will be a next time. It might actually be today. I’ve had the Kool-Aid, and my burger world will never be the same.