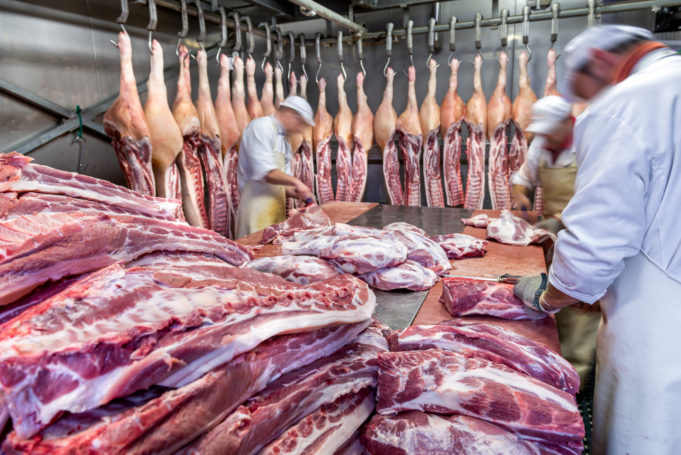 The news from Black Hawk County is dire. Local bartender Veronica said that the Tyson pork processing plant where her uncle works has been hit by an alarming number of COVID-19 cases. USA Today put the number at 1,326 as of last Tuesday. We are giving only her first name because she fears retaliation against her uncle by Tyson staff.

Her uncle recently told Veronica that a Tyson employee called to offer him $500 to return to work. Veronica’s uncle is sick with COVID-19. Tyson knows he is COVID-19 positive because Tyson paid for the testing, she said.

“Tyson does not care” about its employees, the uncle confided to Veronica over the phone. “It’s because of Trump’s executive order.”

Last Tuesday, Donald Trump ordered meat processing plants to remain open. The president cited concerns over the “continued supply of protein for Americans” in the executive order that also includes language that protects meatpacking companies from being sued by employees who contract COVID-19 while on the job.

Veronica said her uncle has decided to pass on the $500 because he doesn’t want to risk infecting coworkers or anyone else he comes into contact with. The 20-year Tyson veteran has enough paid sick leave, Veronica said, but new hires do not.

“My uncle is angry because there are people who have not been there long enough to” accumulate sick days, she said. Those new hires are “getting the same phone calls saying, ‘If you don’t come back, this is going to affect your bonus.’ ”

Based on conversations her uncle has recounted, it appears that Tyson management is knowingly asking sick employees to return to work at the meatpacking plant, Veronica said. For that largely rural community, $500 is a significant amount of money, she added, especially if you have been out of work and have to support a family.

I called the meat packing plant for a response but gave up after being put on hold for half an hour. Through its corporate website, Tyson maintains that “COVID-19 is not considered a food safety concern.” The company said it is “relaxing attendance policies in our plants by eliminating any punitive effect for missing work due to illness.”

Veronica worries about the safety of this country’s food supply under Trump’s new mandate.

“What if [a sick employee] coughs or sneezes by accident, and he is packing our meat on the line?” Veronica asked.

Veronica keeps in close contact with her uncle, who is weathering the disease well so far, and her father who also lives in Black Hawk County. Americans are hearing about the COVID-19 outbreak in her home county, but they may not fully understand the human cost of Trump’s actions, she said.

“I’m from that community,” she said. “With Trump signing that order, communities experiencing outbreaks are being asked to go back to work. That is insane to me.”