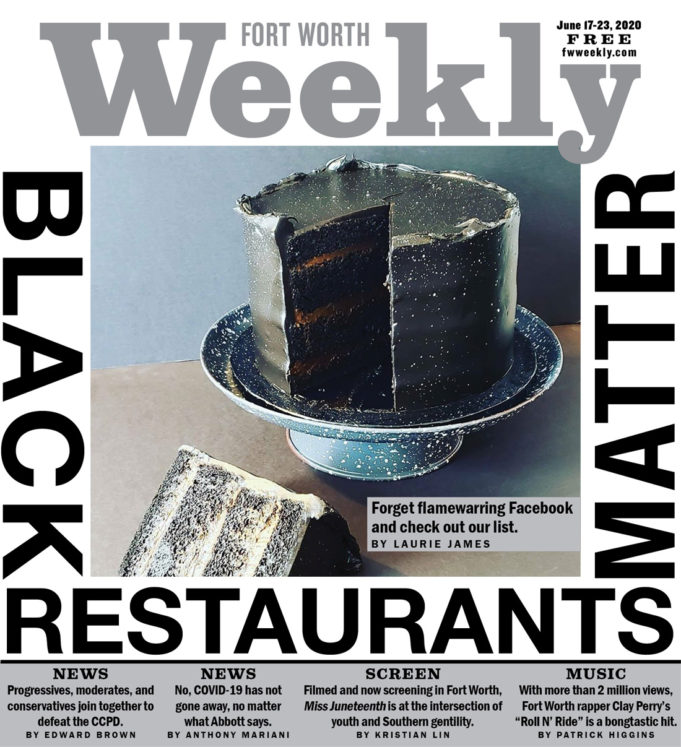 In the continuing efforts to address the violence inflicted on our indigenous Black community by 400-plus years of slavery followed by systemic oppression, the local food community is just as divided as everyone else. That’s a shame. Supporting restaurants owned by Black families seems like a no-brainer. Nobody’s asking you to atone for any participation that your great-great-great-whomever had in the shaping of the America we’re struggling with now. Buying Black is a choice, and if you don’t want to, you don’t have to.

And yet simply asking for a list of Black-owned restaurants to support has somehow become political.

The Buying Black movement predates the murders of George Floyd, Ahmaud Arbery, and Atatiana Jefferson. The movement predates the 1921 lynching of Fred Rouse on Samuels Avenue in Fort Worth’s North Side. At the end of the 19th century, politician Marcus Garvey asserted that Black families needed to buy what they needed and shop where they wanted to without being at the mercy of white business owners who didn’t particularly value the custom of Black people. Say what you will about Garvey (and there’s a lot to say), but the idea has merit. It’s carried forward in the blog We Buy Black. Before you pass judgment, read the excellent post about entrepreneurship and pivoting by D’Jaun Hopewell.

There is a difference between working a job that puts food on a table and owning a business where the proprietor has complete control over how she or he spends their profits. As an aside, cheers to Locavore (715 Hawthorne Av, 817-524-4699). The swanky event venue and rental space is waiving the $125 fee for Black-owned businesses to use its industrial-quality kitchen space.
In the last two weeks, members of neighborhood and foodie groups have posed the seemingly innocuous question, “Who has a list of Black-owned businesses we can support?” Pizza Verde cofounder Jennifer Cabarubio posited this question to Fort Worth Foodies, a Facebook group with 2,200 members as of this writing, “Considering the movement going on in the world, it seems like an awesome time to lift up Black owned restaurants since that would still be applicable to the groups theme of amazing food.”

Member Craig Reed posted, “Keep racism out of this group. … We are for food, no matter what ethnicity it is.”

Another member wrote that the issue “has been addressed many times,” to which Cabarubio asked, “If so, why can’t I find a post?”

Allegedly, Cabarubio was blocked from posting, and the string was ultimately deleted –– but nothing ever really goes away, thanks to the magic of screenshots.

Fort Worth Foodies administrator Connie Bally created a list of Black-owned restaurants and developed a regional map for ease of viewing. She’s still getting pushback from her members. It’s the worst kind of privilege to tell other people why you won’t shop at a Black-owned business. “All restaurants matter” is much more of a statement of where you are in your heart and with your Jesus than “We Buy Black.” And you cannot both use and emulate Black American culture ­­–– the music, the clothes, the language, and the slang –– and refuse to see that economics matter as well (“Hot Box Biscuit Club in the Hot Seat,” June 6).

The noise on Fort Worth Foodies was nothing compared to the flame-and-flounce exit of members of The Eight One Seven community. A member compiled a list of Black-owned establishments, which caused some members to clutch their pearls. I am going to save you the time and trouble of commenting at the end of my article, because it has quite literally all been said before.

Below are excerpts of actual comments that were posted and responses from those of us who clap back against “all restaurants matter.”

“I know a lot of people aren’t going to like this but it needs to be said.” (Your need to say it speaks volumes about your privilege.)

“I mean this very sincerely and with respect.” (No, you don’t, but it makes you feel better to cloak your venom in polite words.)

“I thought the point of choosing a restaurant was because of … [merit], talent, quality … without regard to the skin color of the owners.” (Ah, so you’re edging toward the MLK quote about the content of our characters and not the colors of our skin.)

“And now we are congratulating one another for using race to virtue signal and to feel morally righteous for going to restaurants because the skin color of the owner is different than yours?” (If I believe that Black lives matter, it behooves me to use my spending money to show what I value. If I feel anything patronizing Black-owned eateries, it’s usually full and happy.)

“Lots of small independent restaurants are struggling right now.” (Fair point. Spend your money as you will.)

“You’re REVERSE RACIST.” (My choice to spend my money where I think it will help is capitalism, not racism. Know your ’isms.)

“DON’T BOTHER EXPLAINING, I’LL SHOW MYSELF OUT.” (If you don’t like supporting Black businesses, DON’T. Be done with it. And if you can’t be kind, be quiet.)

It’s a sad statement that many of the Black-owned restaurants I’ve reviewed over the last 12 years no longer exist. Tbone’s Mississippi Style BBQ in Arlington, Pig City Barbecue on 8th Avenue near-ish to TCU, Tollie Giddings’ eponymously named ’cue joint, Lady and the Pit, and my beloved Angie’s Bikkles did not survive into the second decade of the century.

The professional eaters at the Weekly review Black-owned restaurants because this publication tends to favor unpretentious local businesses. Much has been made by us (and you) over the years about Madea’s Down-Home Cooking (1019 W. Enon Ave., Everman, 817-551-9295), and Drew’s Place (5701 Curzon Ave., 817-735-4408), which has bounced all over the Fort in the three decades that Drew Thomas has been cooking smothered pork chops and spicy fried catfish. Damian Placide Sr. continues to make Creole magic in the kitchen at Damian’s Cajun Soul Food Café (2001 S.E. Green Oaks Blvd., Ste. 190, Arlington, 817-649-7770). You can find fried catfish and something Cajun daily, but go on Thursdays, when you can also get the smoked meatloaf.

Barbara Renfro was born and raised in Jamaica, and she’s dazzled Arlington palates for better than a decade with authentic island cuisine at Jamaica Gates (1020 W. Arkansas Ln., 817-795-2600). Samson’s Market Bistro (4307 Camp Bowie Blvd., 817-373-5646) continues to flourish in part because of the love that co-owners Samson and Jenber Yosef have for the flavors of their Ethiopian homeland and the ceremony with which they present your beautifully plated food.

Which brings me to a point: Black chefs can specialize in any cuisine they choose. Fried, baconated, and covered in gravy with a side of greens and yams? No problem. But let people cook what they want to, not what you think they should. See also Chef Keith Hicks of Ovation (of blessed memory) and Buttons (of blessed memory). His name’s synonymous with old-school Southern comfort food, but at Ovation, he dabbled in Italian cuisine and the fine art of White Castle burger mimicry (“All That Jazz,” September 5, 2007).

Tareka Lofton of Loft22 Cakes (106 E. Daggett Ave., 682-841-1771) was carving a niche creating gourmet wedding cakes when COVID hit. Lofton enjoyed a good 15 minutes of fame when she created a layered “Quarantine Cake” that looked like a roll of toilet paper –– the delicacy garnered her national recognition. My birthday week coincided with Breonna Taylor’s birthday on June 5. I wouldn’t have known this, except for the fact that the Louisville EMT was shot and killed in her own home by police who executed a no-knock warrant for someone who didn’t live there. That weekend, Lofton sold her Blackout Cake (four fancy layers of sumptuously moist chocolate cake with oozy chocolate layers in between, all topped by black chocolate icing) and donated 50% of the proceeds to Black Lives Matter.

More recently, I’ve fallen in love with Black Coffee (1417 Vaughn Blvd., 817-782-9867). It’s the only business of its kind near Texas Wesleyan University, and owner Mia Moss has done her best creating a space for the community to gather.

Not wanting to rely on my own knowledge, I asked around. Lauren Phillips is a coworker at my other freelance side hustle and is relatively new to town. Her picks also include Smoke-a-Holics (1417 Evans Ave., 817-386-5658), where she singled out the smoked leg quarters and mac ’n’ cheese, and Carpenter’s Café (1116 Pennsylvania Ave., 682-499-8630), where she said the Southern Slapped Garden Salad, with its scoop of smoky chicken salad, is hard to pass up. Ooowwweee Wangz and Catfish (3951 Sycamore School Rd., Ste. 117, 817-294-7777) has a backstory that resonates with us in the Fort: Co-owners Matt and Martha left their day jobs to pursue their love of food. And Lauren reminded me about Dough Boy Doughnuts (4910 Camp Bowie Blvd., 682-841-7797), home of the Fruity Pebbles donut and the donut breakfast sandwich.

If you’re interested in home meal delivery, check out personal chef Scotty Scott’s Cook, Drank, Eat (Cookdrankeat.com). If you want to learn more about local Black history and our chefs, check out the woman-owned Soul of DFW (Soulofdfw.com/tours). Co-owners Deah Berry Mitchell and Dalila Thomas list their favorite places on the website.

Finally, you can support Black-owned restaurants without sifting through the “all restaurants matter” comments on your local neighborhood Facebook page or reading what a well-meaning white writer has to say about greens. DFW Black Owned Restaurants on Facebook provides enthusiastic reviews along with pictures of the food –– without the side of imperialism and discord.

Any issue of pay-to-play was not essential to the point of the article, that Black restaurants matter. There are numerous competing and overlapping Fort Worth foodie groups available for people to enjoy. Or not. These groups may also have lists that duplicate one another.

Visit Fort Worth (Fortworth.com/discover-diverse-fort-worth/african-american-heritage) and DFW Black Owned Restaurants (Facebook.com/groups/273683103834282/) — as cited in the article — have compiled broad and deep lists of both Black-owned restaurants and businesses.