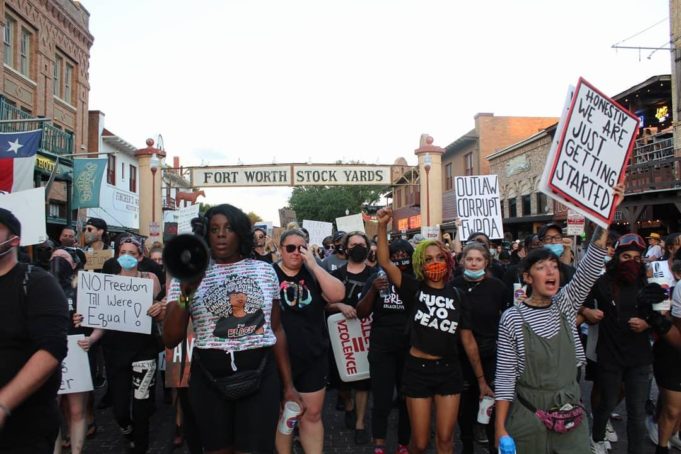 Yesterday evening, law enforcement supporters gathered at The Stampede Saloon for the Tarrant Backs the Badge event in the Stockyards. The Facebook event page said the night offered a chance to take “focus off the protesters and non-stop media attacks on law enforcement.”

Outside, around 200 protesters with Enough Is Enough shouted chants of, “We hold you accountable!” as police stood between protesters, who were dressed in black, and a few dozen bar customers on the Stampede’s patio. The grassroots movement Enough Is Enough aims to address the too-frequent killing of unarmed black men and women by white police by marching, raising funds, and engaging in dialogue with local politicians and law enforcement officials. This was the 23rd day of protests that began after the killing of George Floyd, a black man, by a white police officer as three officers watched.

“Do you see how pissed off they are because we want them to stop killing us?” protest organizer Nysse Nelson asked the crowd. “We did the right thing by coming out and doing this in their face tonight.”

One middle-aged white man shouted his response from the bar patio.

As upbeat country music blared from the saloon, many on both sides engaged in a heated shouting match. One black man who was standing on the patio asked protesters how he was racist. I heard no discernible response. Enough Is Enough then marched down West Exchange Avenue past bars that were airing President Donald Trump’s Tulsa rally.

After passing Mule Alley, employees at Trailboss Burgers (part of The Riscky’s family of restaurants) brought bottles of water to the parched protesters who had started their march miles away at the Tarrant County Courthouse earlier that day. During the hour I spent following the rally, I did not see the protesters try to forcibly enter businesses, something the movement has been heavily criticized for in the past. Several commenters on the Weekly’s Instagram livestream scolded the protesters for using vulgar language to achieve their aims.

As the protests left the Stockyards, I headed to South Main Village to watch a more subtle form of protest, this one a projection installation dubbed #Project4thepeople. On the large brick wall adjacent to Tinie’s Mexican Cuisine were rotating photos of black men and women who were unarmed when they were killed by police officers. On the right, photos of recent global protests were juxtaposed with the portraits. Below, a text by American activist and revolutionary socialist Fred Hamptom read: We’re gonna fight racism with solidarity. 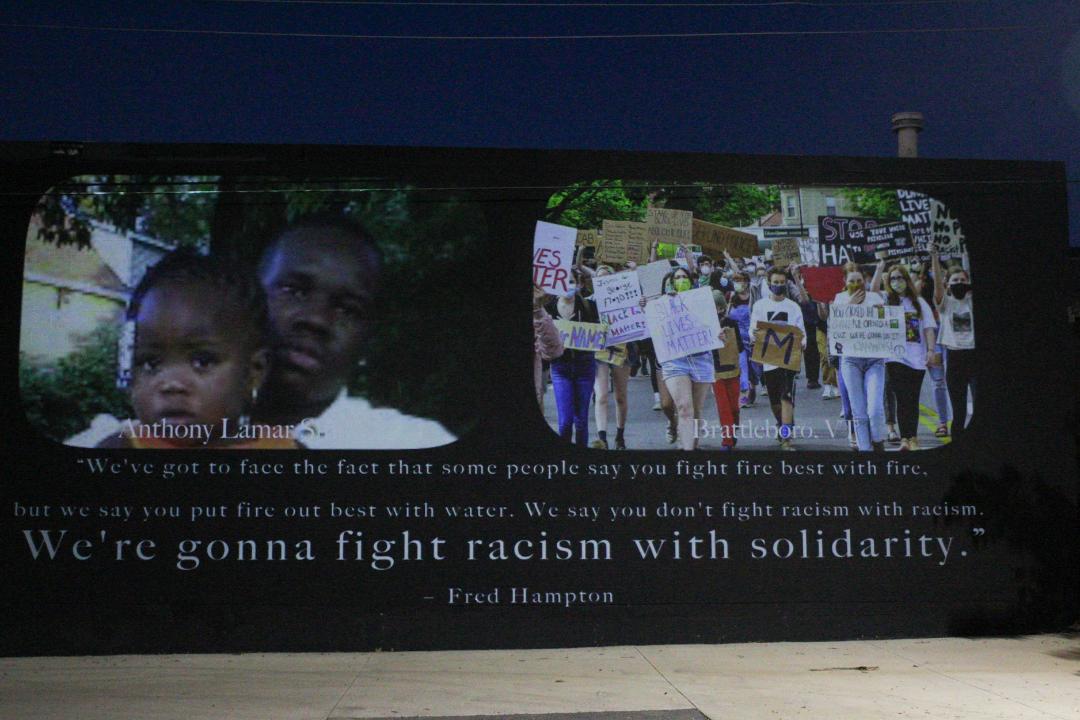 Talambas said he has spent the last few weeks “listening” to protest leaders. He recently reached out to Williams, and the two friends settled on the idea of using photography and text from Hampton.

Williams said it was important to show photos of the black men and women smiling.

“I’m a father,” he said. “I’m seeing a brother on the screen with a child. I remember holding my baby for the first time. On the other side are people who are frustrated and trying to make a change. I hope we will see change. It’s going to take people who care to make change happen. As a black person, if we could have done it by ourselves, it would have been done. We need solidarity. We are out fighting for each other.”