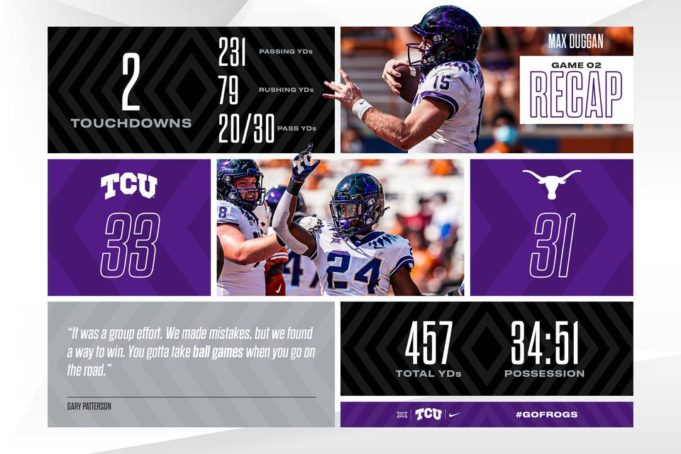 At the risk of sounding cliche, it was a nice little Saturday. TCU beat Texas with the help of a late turnover. Baylor burned to West Virginia in overtime, and Iowa State flipped the Sooner Schooner for the second consecutive year. It’s somewhat unbelievable there was enough time left to enjoy anything after the almost five-hour flag fest that was Gary Patterson’s posse visiting Austin. The foreshadowing suggested from the beginning that this game would be slow and arduous. The kickoff required three attempts before the teams could proceed without incident to the rest of the game. By the end, 26 penalties were assessed for slightly more than 200 yards. I’m not even mad, just impressed. Even Coach P got in on the action with a sideline interference call when a side judge went tumbling to the turf after colliding with Patterson during a play. Unfortunately, those 15 yards helped propel the Bevos to a touchdown on that drive.

All kidding aside, the Horned Frogs looked like a completely different offense from last week’s bummer against the Cyclones. Sonny Cumbie crafted an offensive gameplan emphasizing the running attack that was dead on arrival the week before. Eight purple players were involved with 50 attempts on the ground, netting an improved 226 rushing yards. Quarterback Max Duggan (#15) started and played every snap. The sophomore slinger completed 20 of his 30 passes for 231 yards to complement his status as leading rusher. Duggan sprinted for two touchdowns, and freshman running back Darwin Barlow (#24) punched in the other. Frog kicker Griffin Kell (#39) earned his keep, hitting all four of his field goals in addition to three extra points to crown him as the leading purple scorer. Kell also collected Big 12 honors as the conference special teams player of the week. The offensive frustration resided in the red zone on Saturday for Duggan and company, who moved the ball steadily in the open field only to stall repeatedly deep in Longhorn territory. Fans shouldn’t be surprised by this shortcoming as it was as common as COVID last season. As the field shrinks, defenses usually become more efficient while defending less grass. Spectators should be mostly pleased with how the offensive unit is trending. Expect Duggan to start making more deep throws and taking downfield chances in the coming weeks as his confidence and feel improve.

For as fresh as the offense looked, Patterson’s defense looked fairly similar to last week. The Frog scheme is not a “bend but don’t break” system. The schematic nature is somewhat similar to a damned river. When everything goes to plan, not a drop escapes, but a hole in the wrong place might wash the entire damn thing away. Texas quarterback Sam Ehlinger (#11) passed for four touchdowns with the help of his talented receiving corps. If there is blame to assign — and there is — it rests squarely on the TCU (lack of) pass rush. “That guy” doesn’t exist on the defensive line right now. These Frog linemen are not making conference quarterbacks uncomfortable. Adding safety and corner blitzes were only marginally effective at pressuring Ehlinger. Luckily, an interception just before halftime and a forced fumble on our own half-yard line at the end of the game proved enough to elevate the Frogs over UT for the seventh time in the last nine meetings. I’m not a gambler, but I wish I were, because the Longhorns were two-touchdown favorites in Austin and I have a feeling some of our Funkytown friends have some extra cash in their accounts this week. Texas tumbled from their undeserved ninth-place ranking to 22nd. The Austinites were probably going to fall regardless now that voters are starting to include PAC-12 and BIG-10 teams in the polls even though those conferences won’t play games for another three weeks.

This means that in the most pandemic-tastic way, Texas-OU weekend will occur during a drive thru-only State Fair and between a barely ranked UT and an unranked Oklahoma squad who each lost conference games in the previous week. How 2020 is that? TCU hosts their purple counterpart Kansas State on Saturday afternoon. The Wildcats are fresh off a 10-point victory over the Red Raiders and are 9-point underdogs against our Frogs. If Cumbie and Patterson are able to maintain their rushing momentum and plug the big-play problems in TCU’s defense, then this should be a tight matchup our boys are more than equipped to prevail in.

UPDATE: This story was updated on Wednesday to reflect the K-State spread accurately.