Summer Lane Emerson found herself in a deep depression earlier this year. The sudden impact of the COVID-19 pandemic brought the country-influenced gospel singer to a standstill. Shaking off her mental state after spending time regaining focus, the singer-songwriter has emerged and has more than maintained her lofty place in the Fort Worth scene since landing here in 2017 from a small town in East Texas. Emerson has released two singles recently and plans to release more to tease her debut album. Redbird is set for a mid-2021 release and will be celebrated afterward with her full band at The Post at River East.

“I lost all my shows,” she said. “I’m trying to embrace my mental health journey into the album because that’s what the album is about. It’s about mental health. To be able to work on this album and get things done and still struggling with what I’m struggling with right now, I dunno, it’s just this awesome feeling when you pull out something like this. It’s super-awesome, man.”

Growing up alongside her older brother and fellow Fort Worthian Vincent Neil Emerson, Summer said her brother taught her four guitar chords at the age of 14. The now-25-year-old said Vincent introduced her to the who’s who in and around town, notably leading her to the singer-songwriter spotlight.

“I didn’t realize that I could sing until I moved to Fort Worth,” she said. “People just kept listening. Whenever it comes to the singing and songwriting, Vincent had a hand in bringing me into the scene and my Uncle Tony who I never met, but I like [Uncle Tony’s] style of music and I do think I carry that gospel sound from listening to him.”

Since then, she has played several bars/venues throughout North Texas and said she has recently gained more attention in Coppell while also playing local hot spots like Lola’s Saloon pre-COVID and most recently other venues in and around Fort Worth.

The recent releases are set to lead to six other songs in the following months, all of which were recorded with Emerson’s friends and fellow musicians in five days at AudioStyles with producer/accompanist Taylor Tatsch (Maren Morris, Cut Throat Finches, The Mammal Virus) in Dripping Springs.

Tatsch did a lot more than produce. Along with Brian Briseno (banjo), Marin Sargent (upright bass), and Liz Sloan (fiddle), he handled guitar, drums, backing vocals, and mellotron. The eight-track album will be produced by Todd Pipes (Deep Blue Something).

“Taylor Tastch, he played a lot,” Emerson said, noting that he had contacted her years ago about recording. “It was insane and awesome to work with him. It was a no-brainer.”

The singer-songwriter said she wants to make her songs and full release a time stamp on Earth and added that she’s excited about what is to come and more than excited to track a footprint with her music to keep in hers and others’ memories.

“The album is self-healing, and that’s the kind of the way I like to look at it,” she said. “You got your time stamp, you’re there, and you put it on Earth. I love it.”

The next release will follow her last two singles, “Jaybird” and the title track “Redbird.” The next will be released near or soon after November and will be titled “Banjo Hands,” which was influenced and written in honor of Emerson’s own current bandmate, the banjo player Briseno.

“It’s kind of a growing inspiration,” Emerson said about her current and upcoming releases. “That’s kind of the biggest way I can put it. It’s an evolving album over time, and I want it to stay in the timeline of how it evolved.”

Emerson explained that every song on the upcoming album has an important meaning, one that plays into the healing theme, from the points when it got really bad for Emerson to the point where it got really good. The heartfelt “Lexapro” and “Bloodstained Wings” are dramatic, dark tracks, she said.

As of now, Emerson is holding steady at the family ranch back in East Texas in Edgewood with her family, training horses daily and playing songs in between. Emerson said her mother, Jenny Emerson, has been the only constant support she’s ever had.

“She’s helped me through it all,” Summer said. “Seriously, if I wouldn’t have had her, I might not have made it. When your soul gets so sad and you have someone like that to pick you up, it’s just amazing!” 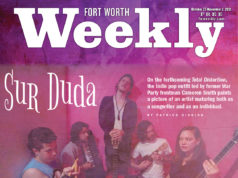