When the National Finals Rodeo (NFR) moved to Arlington this year, many saw the move as an economic coup. The 10-day-long event had spent the previous 15 years in Las Vegas. COVID-19-related restrictions in Nevada that prevent large ticketed events was perhaps the biggest reason the NFR decided to leave Las Vegas. The 2020 NFR runs through Saturday at Globe Life Field.

For the past several days, Fort Worthians have warmly welcomed the influx of thousands of rodeo contestants, NFR staff, and fans. For local businesses and city officials, the visiting rodeo fans represent a much-needed economic boost. Arlington Mayor Jeff Williams recently said his city was excited to accept “rodeo fans who will be traveling from across the country to cheer on these professional cowboys.” Locals visiting the Stockyards recently have told me they have noticed the swells of new faces who sport NFR or other out-of-town attire and appear insatiably interested in posing for photographs near historic landmarks in the Stockyards.

One popular routine for the out of towners, as evidenced by the predictable surges of visitors, includes shopping and dining in the historically cowboy-friendly Stockyards during the afternoon before visiting Globe Life Field ahead of 6:30 p.m. competition start times and before subsequent returns to the Stockyards or downtown Fort Worth for late-night beers and live music.

Many residents of the North Side, the largely Latinx neighborhood in which the Stockyards is located, are concerned because many of the visitors are not wearing masks.

“No mask enforcement in stores, it seems,” as I was told by one Northside resident who asked to remain anonymous. “These tourists are blatantly super-spreading in a Mexican neighborhood with little regard for the employees and families that make tourism happen. My family of Northsiders has already lost several family members to COVID because of tourists’ total disregard for the neighborhood’s health.

Tarrant County has seen 1,546 new COVID-19 cases this week, according to the county. The community spread level is “substantial,” according to the county website, and 913 Tarrant County residents have died from the highly infectious disease since March. Texas has recorded 23,439 deaths due to COVID-19 while more than 286,000 Americans have died from the disease since March. Latinx residents are nearly twice as likely to contract COVID-19 and nearly three times more likely to die from the disease than white adults in this country. Public health officials across the country frequently warn against super-spreader events, like recent Trump rallies, that have the potential for exponentially accelerating the spread of COVID-19.

The large, mostly unmasked crowds observed today confirmed the Northside resident’s observations. Of the hundreds of visitors packing the Stockyards area this afternoon, only a few (inside stores and outdoors) wore masks or other sorts of face coverings. An ongoing order by Gov. Greg Abbott requires that Texans wear face coverings when inside a business or outdoors in a public space where social distancing is not possible. 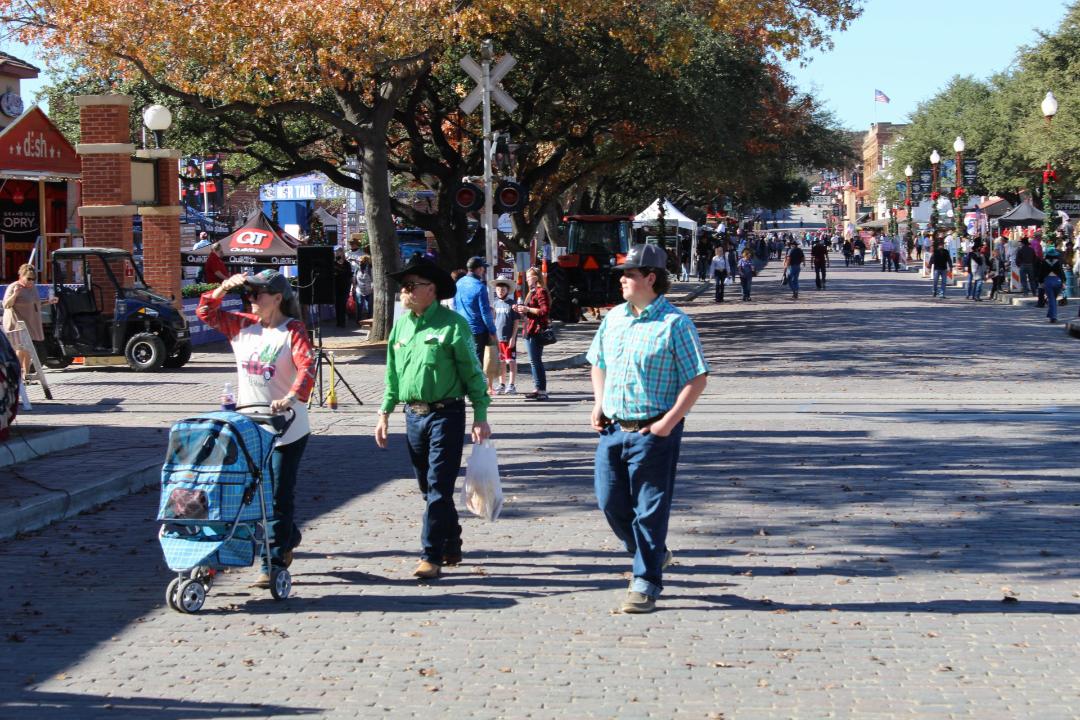 Mayor Betsy Price recently weighed in on Instagram. Sporting a face mask that read “Fort Worth” and with over a dozen #yallwearamask hashtags superimposed on the post, Price said, “We’re kicking off the second week of the National Wrangler Finals Rodeo in Fort Worth this week. A reminder that masks are required at all time. Let’s stay safe and have some fun.”

The majority of the 10 comments were complaints by locals about visitors not wearing masks in public spaces.

West Exchange Avenue is cordoned off on either side of North Main Street to make the space pedestrian friendly. Live music and pop-up bars invite visitors to congregate. Many retail stores were devoid of customers complying with the state order. Around 10% of the visitors were wearing any sort of face covering.

Four local retail store managers declined to comment on why they were not following the mask mandate. One bike-mounted Fort Worth police officer nearby said it was not the job of police to enforce the mandate, saying that the city’s code enforcement department bears that responsibility.

Diane Covey, spokesperson for Fort Worth Code Compliance, told me her department is taking the “lead of COVID-19 enforcement when it comes to restaurants and bars.”

Fort Worth police department and “all employees of the city play a role in helping to educate everyone to wear masks for the safety of our community,” Covey said.

Code Compliance is working to ensure mask-wearing is enforced, Covey added. Investigations, she said, are being completed in the Stockyards on a nightly basis. The department can issue citations to businesses that fail to comply with lowered occupancy limits and the face-mask mandate, Covey said. We will update this post as more information becomes available from Code Compliance.

Anyone who wishes to report code compliance violations can call the city’s COVID-19 hotline at 817-392-8478.