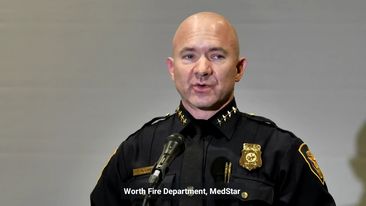 Late yesterday afternoon, Mayor Betsy Price joined Police Chief Neil Noakes, Fire Chief Jim Davis, and other officials to describe the status of dozens of victims of yesterday’s 133-car pileup on I-35W. Noakes and Davis said an ongoing investigation will determine the cause of the accident that killed six people and left dozens of others requiring treatment at area hospitals.

Davis said that 911 emergency calls were received just after 6 a.m. yesterday morning. As police, fire, and medical teams arrived on the scene, the affected crash site was found to be half a mile long, he said.

“There were multiple people trapped in the confines of their vehicles,” Davis said. “We know there are six fatalities, 36 people transported to hospitals, and 65 people being treated at area hospitals.”

A spokesperson for MedStar, which provides mobile emergency care, said 13 ambulances were used at the scene.

“This is an incident that our agencies train for but hope and pray never happen,” the spokesperson said.

The police chief said officers were dispatched by 6:05 a.m. before arriving on scene 10 minutes later.

“It appears at this point in the investigation that ice was a factor,” he said.

Noakes urged anyone with video footage or photos of the accident as it unfolded to share that information through the Fort Worth police department’s nonemergency line: 817-392-4222. Any additional information could be helpful in determining the cause of the catastrophic accident.

Video footage of the wreck shows cars, trucks, and 18-wheelers slamming into already disabled vehicles while traveling at high speeds. Through a public statement, North Tarrant Express, which is responsible for servicing and treating the southbound stretch of road in question, said that “maintenance crews started pre-treating the corridors on Tuesday morning and have been spot-treating continuously as we monitored the roadway. We will continue treating the highways through the weekend and into next week, as long as the storm is active.”

The statement, which was released after the massive accident, does not explicitly state how the scene of the accident was treated prior to the 6 a.m. Thursday accident. Media requests via email and direct calls to North Tarrant Express have not been returned. We will update the story when North Tarrant Express replies.

When asked how the stretch of icy road was treated, Noakes said, “That will be part of the ongoing investigation.”