It was an ideal day for a baseball game, and many Rangers fans like myself took advantage of it. The temperature was in the mid 70s, the roof was open, and people would be allowed in Globe Life Field. It was certainly a welcome sight. The day had come to once again experience baseball time in Texas and rediscover the sights, tastes, and sounds of Rangers baseball as fans begin arriving hours before the gates opened at noon for the 3:05 start.

One of the first people inside was Fort Worthian Jessica Greene, who said she wanted to walk around the concourse and explore the new facility and its amenities.

For me, it was my 22nd consecutive home opener.

While they all are memorable and different, this one was special, mostly because there were live spectators in the stands and not cardboard cutouts. There was real crowd noise and not piped-in noise. There were numerous open concession stands and dining areas that had been closed. The paid attendance for the home opener was 38,238 compared to last year’s zero. Also, there were hundreds of stadium employees there to help. It was good to see many of them, who have been there for years.

“Opening Day at Globe Life Field has been a long time coming, both for the organization and the community,” said Rob Matwick, Rangers executive vice president for business operations. “I want Rangers fans to experience the festivities of a traditional Opening Day.”

It was the first time spectators were allowed to attend a Rangers game at the $1.2 billion state-of-the-art climate-control stadium, which opened in 2020.

Maybe no one was happier to see fans in the park than public address announcer Chuck Morgan, who last September announced his 3,000th consecutive game but with no fans in attendance. The National Baseball Hall of Fame took notice, though, and following the season requested his microphone, which is now showcased in Cooperstown’s national shrine.

“Last year didn’t feel like home without fans in the stands,” Morgan said. “I am ready to have a lot of Rangers fans in the ballpark.”

He got his wish, as the stadium was near capacity for the inaugural home game.

Yet it was not without controversy as the Rangers organization received some negative feedback when it announced last month that it would open the 40,300-seat stadium to 100% capacity for the two exhibition games and the home opener.

That is what the Rangers are encouraging their fans to do. All fans in attendance are required to wear a mask except when eating or drinking. Also, social distancing is required on the concourse, and hand sanitizing stations are placed throughout the stadium. The Rangers expect their fans, many of whom have not seen live baseball in over a year, to adhere to the guidelines. The organization feels the safety protocols are a small price to pay to see baseball in person again.

“In spite of the challenges the pandemic presents, there is a safe way and a responsible way to conduct events,” Matwick said. “We look forward to doing that.”

The 38,238 fans at the home opener on Monday represented the largest attended sports event since the pandemic. The Rangers are the first and only team to allow full capacity and are being watched carefully by all the other clubs. Right now, there is a lot of attention focused on what they’re doing.

There was also attention on the controversy surrounding the ceremonial first pitch. Texas Gov. Greg Abbott, who was scheduled to do the honors, let the Rangers know that he would not throw out the first pitch because of Major League Baseball’s decision to move the All-Star Game out of Georgia over the state’s new voting law.

The governor’s actions, however, did not hamper the pregame festivities as two courageous health care workers and a teacher did the honors.

Prior to the performance of the Canadian and U.S. national anthems, there was a moment of silence in memory of two longtime friends of the organization: country music legend Charley Pride, a member of the club’s ownership group, and Dr. Bobby Brown, a cardiologist and former major league player and American League president.

The pregame festivities concluded with a flyover of F-16s from the Naval Air Station Joint Reserve Base in Fort Worth.

It was then that Morgan’s booming voice announced, “It’s baseball time in Texas.”

The waiting was over. Fans were now at the Rangers’ new home, enjoying America’s National Pastime. It was like finally being able to drive your luxury car despite buying it 18 months earlier.

This year, I decided to go to the home opener as a fan and not as a member of the press. I sat in various places, dined in the all-you-can-eat section, and walked 360 around the stadium’s first and fourth levels.

Before the game, I joined Rangers Spanish broadcaster Eleno Ornelas at some tailgate parties near the stadium. (The Rangers did not allow tailgating in its parking lots.)

It was interesting listening to people’s comments about the stadium.

“I’m still a fan of the old stadium,” said Abiel Garza of Dallas.

“But you’ll like this stadium in July and August,” said his friend Pedro Colegio, sitting next to him.

Others were pleased that the seats are wider and have more leg room in front of them.

“This has been a great experience,” said German Pulido of Grand Prairie, who brought his son with him. “He’ll be playing here one day,” he said.

“I was here a few weeks ago when I got my vaccine and really liked what I saw of the stadium,” said Eva Montgomery of Hurst. “I told my daughter I wanted her to bring me to a game for my 80th birthday, and here I am.”

Despite the near full capacity, the Rangers now plan to reduce capacity for future games to allow for social distancing.

The home opener was not the first time that people were allowed in the stadium, as Globe Life Field hosted graduations last year as well as the National League Division series and the World Series, where only 11,500 fans were allowed. In December, it hosted the National Finals Rodeo and the Luminova Holiday Lights Display. All those events had limited capacity.

Not so in the home opener. It was a day to remember. As manager Chris Woodward said following the game, which the Rangers lost 6-2, “It felt like back to the old days when we had full capacity.”

Ozzie Garza has been writing about the Rangers for more than 20 years and also serves as a Globe Life Field tour guide. He is a frequent contributor to the Fort Worth Weekly. 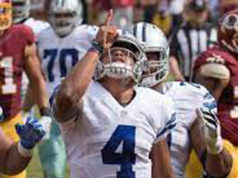 They Are What We Thought They Were 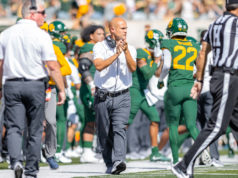