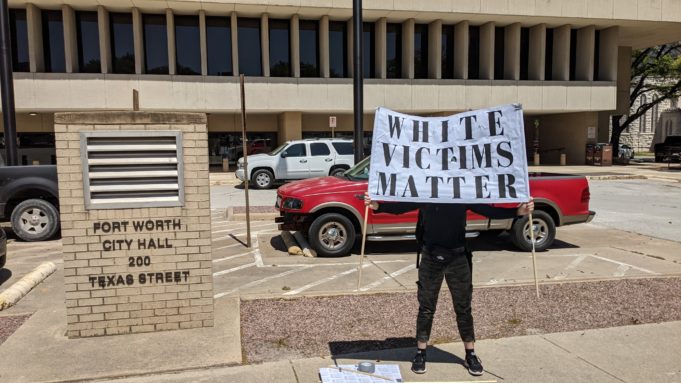 Dozens gathered outside Fort Worth City Hall this afternoon in anticipation of a “White Lives Matter” rally, one of many occurring on the same day in nearly four dozen cities across the country.

The vast majority of people in attendance in Fort Worth were there in opposition to the rally, which drew only a handful of vocal supporters. Counterprotesters outnumbered WLM participants at least five-to-one.

“We’re out here to let these idiots know that we’re not going to allow them to come into our city and do what they do,” said Donnell Ballard, president of United My Justice, a group that organized large-scale Black Lives Matter protests in Fort Worth last year. 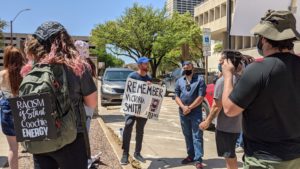 Counterprotesters were the first to arrive on the scene. While they waited for the rally to begin, they witnessed a Hawaiian shirt-wearing motorcyclist drive multiple times around City Hall.

They suspected he was a member of the far-right Boogaloo movement after they witnessed him make a cutthroat gesture toward them. The Boogaloos are known for their Hawaiian shirts.

Their suspicions appeared to be confirmed by a message from the White Lives Matter Telegram channel. “Good luck,” the message read. “I was the guy on the bike. The cops made me leave.” 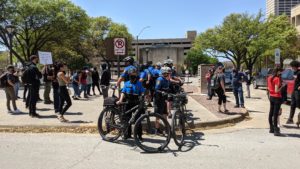 One of the organizers of the rally was a twenty-something year old white woman named Beth, who declined to identify herself by her last name.

“This is a march for remembering the white victims that haven’t really been mentioned as much as other victims,” Beth said. “This isn’t a war against anything but the media.”

Beth repeatedly emphasized the story of Victoria Rose Smith, a young white girl killed by her Black foster parents. Her death has been widely covered in the media.

Beth brought several signs. The largest read, “White Victims Matter.” Another listed the names of white victims such Tony Timpa, whose death at the hands of Dallas police in 2016 has also been widely covered in the media.

Another attendee, who would only identify himself by the alias Dresden Berns, referencing the German city bombed to rubble by the Allies during WWII, shared a similar sentiment about his belief that the media doesn’t cover the stories of white victims.

But that’s not all he said. And the more he talked, the more it became clear that the ostensibly unheard plight of white victims was not the only reason he attended.

“All of a sudden we have to promote diversity. We’re not entitled to maintain an ethnic majority, and if we lobby for that, then we’re called white supremacists,” Berns said, echoing talking points of the “Great Replacement” theory that has been promoted by white supremacist groups and Fox News personality Tucker Carlson.

While speaking with me, Berns insisted that he is not a white supremacist.

Later on, he used the phrase “blood and soil” during a lengthy debate with a TCC professor, Dr. Bradley Borougerdi.

The term “blood and soil” originated in Nazi Germany and has become adopted by various North American white supremacists, white nationalists, and Neo-Nazis.

In his debate with Borougerdi, Berns repeatedly promoted factually dubious claims, such as the notion that differences in culture “come from the blood” and that interracial mixing reduces diversity.

“Clearly, he’s made up his mind,” Borougerdi said. “He didn’t want to have a conversation that addresses anything that contradicts his own beliefs.”

Another attendee, who did not identify herself, was a young woman of Asian descent. Initially, she didn’t identify herself as a supporter of the rally and asked one white counterprotester if they would apologize for their whiteness. 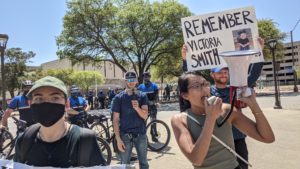 Eventually, she took to a megaphone and spoke in support of the rally. One point of emphasis was that Black Americans are also responsible for anti-Asian violence — a trope that conveniently sidesteps the discrimination that both communities have experienced at the hands of white nationalism.

When confronted by counterprotesters, she described the Black Lives Matter movement as a “terrorist organization” that has “ruined America.”

While debating with Borougerdi, she said, “There’s no racism, bro.”

On several occasions, she said that George Floyd died of a drug overdose, a false claim contradicted by both public and private autopsies.

At one point, she claimed to the crowd that she was an independent journalist. When I asked her where her work could be found, she declined to answer. 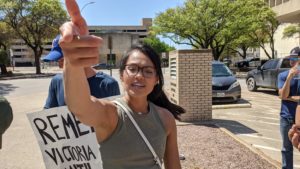 Tensions flared several times throughout the protest. There was no significant violence and no arrests were made, but several accusations of assault flew from both sides.

One came from Kevin Whitt, who appeared to align himself with the White Lives Matter protesters. His phone was knocked out of his hand by a female counterprotester, who in turn accused Whitt of assaulting her first.

When an officer asked to speak to him, Whitt seemed surprised.

“How do you know my name?” Whitt asked the officer.

“Because they’ve been yelling your name,” the officer responded, motioning toward the counterprotesters.

After Whitt, a former drag queen, filmed himself outside the U.S. Capitol during the Jan. 6 insurrection, the Republican Party of Texas fired him from his position as a field organizer.

Police chose to separate protesters on multiple occasions. The first was after one of the signs brought by Beth was broken by a counterprotester.

After her sign was broken, an officer asked Beth — who was the only White Lives Matter supporter present at the time — to reconsider the event.

“Why don’t you just leave?” the officer implored.

A person who is believed to be Beth later lamented the interaction in the White Lives Matter Telegram channel.

“The cops were telling our people to go home,” the message read. “We would have had more people if the police weren’t cucked.”

In the end, the White Lives Matter supporters decided to leave first. 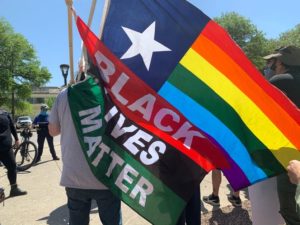