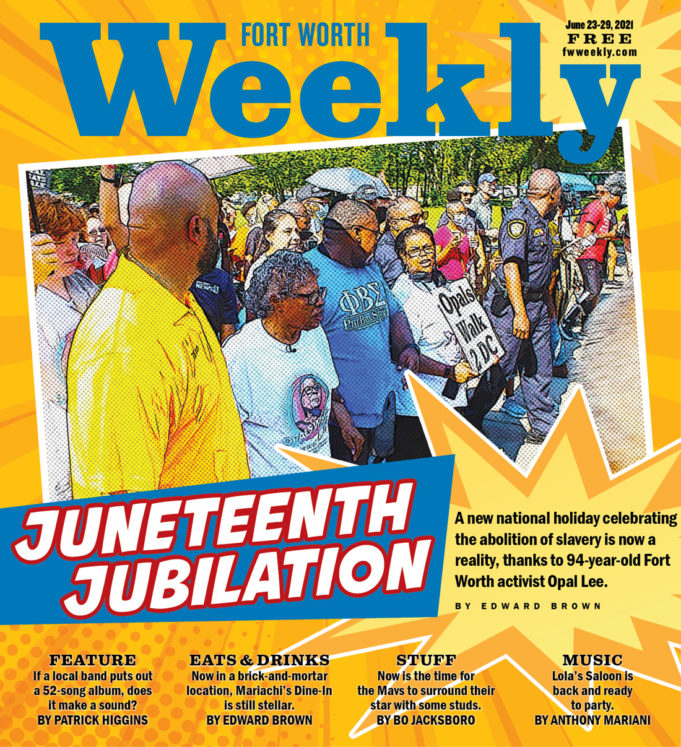 The dense crowd of Juneteenth celebrants seemed to disappear over the horizon. Carrying placards that read “Opal’s Walk 2 DC” and “Let’s Celebrate Freedom,” the men, women, and children eagerly waited at Evans Avenue Plaza on the South Side for the “Grandmother of Juneteenth” to lead the 2.5-mile walk toward downtown.

As a golf cart carrying the 94-year-old activist Opal Lee arrived at the front of the procession, dozens of professional and amateur photographers vied for a photo of her. Newly elected Mayor Mattie Parker worked her way through the crowd to congratulate her. The frenzied commotion prompted event organizers and local police to order the photographers to disperse so the march could begin at its 10 a.m. starting time.

Lee, diminutive in stature but commanding in presence, wore a white T-shirt that commemorated her annual walks that have called for making Juneteenth a national holiday. After hugging a few well-wishers, she began her walk on that Saturday, June 19 morning, now federally recognized as Juneteenth National Independence Day.

Speaking at the Tarrant County Courthouse at the conclusion of the walk, Lee addressed the hundreds of followers who made the historic walk with her.

“Know that I love you and know that we are going to continue to make this the best place in the whole wide world,” she said. “Remember, together, we can conquer the world. Please, please continue the kinds of things you know we need to become one people. It’s not a white thing. It’s not a Black thing. It’s an American thing. This is the beginning of us getting the disparities out of our communities so we can work as one. If people can be taught to hate, they can be taught to love.”

Five years ago, Lee mapped out a 1,400-mile-route from Fort Worth to Washington D.C. Along the way, she held rallies that centered on 2.5-mile walks to remind her growing number of supporters that it took upwards of 2.5 years for enslaved Americans to learn of their freedom. That effort helped Lee gain her first 100,000 petition signatures that called for U.S. Congress to make Juneteenth a national holiday. The walks became popular annual events in Fort Worth.

On Sept. 23, 2020, around 1.5 million petition signatures were delivered to the U.S. Congress, the culmination of Lee’s petition drive that asked federal lawmakers to ratify legislation to make Juneteenth a Title 5 federal holiday that celebrated freedom from slavery.

“I am so thankful for all the young people […] who have helped to let people know about my walking campaign and petition,” she said during a press conference at the time. “Juneteenth should be recognized as a federal holiday.”

The designation of Juneteenth as a federal holiday is the culmination of Lee’s decades of tireless work as a civil rights advocate. After retiring from teaching in 1976, she became active in events that raised awareness of Fort Worth’s minority communities and the history behind Juneteenth. Those activities included bus tours that brought Fort Worth city leaders to economically disadvantaged Black neighborhoods throughout Fort Worth in the 1980s. She frequently recounted the story of the time around 500 white rioters burned down her family’s home in a primarily white neighborhood on the South Side in 1939. Lee was 12 at the time.

“On the 19th day of June, people in this neighborhood gathered,” Lee told the Star-Telegram in 2020. “The Realtor who sold the house to my parents [warned] my father [who then grabbed his gun]. The cops were there. My dad talked to the police. The police said, ‘If you bust a cap, we’ll let them have you.’ My mother sent us to friends on Terrell Avenue. They burned the furniture, pulled it out. The fact that it happened on the 19th day of June has spurred me to make people understand that Juneteenth is not just a festival. It should be a unifier.”

In a public statement, Parker said that the federal designation is “long overdue,” adding that the legislation is “historic for our country, and we are committed in Fort Worth to making sure this is more than just ceremonial. Juneteenth is a single, critical step of a much longer journey to understanding the history of enslaved people and how we move forward. Opal Lee embodies the best of humanity — determination, character, and an indomitable spirit. Opal Lee is a teacher, author, activist, and pillar of the Fort Worth community who has dedicated her life to service above self. We as a city are committed to standing united with Opal Lee’s vision of a world that could be. We challenge every business, organization, and individual in our community and beyond to lock arms with us and do the same.”

Max Krochmal, author and associate professor of history at TCU, said the establishment of Juneteenth as a federal holiday is a testament to Lee, her family, and the many advocates who kept the Juneteenth candle burning for more than 150 years.

“Juneteenth is often misinterpreted,” he said. “It is true that Texas was a holdout that continued to impose slavery after the war ended. Juneteenth is less about enslaved people being informed of their freedom, and it’s more about slave owners being told that their system of oppression was over. It was the moment when the federal government finally and belatedly came down on the side of justice and humanity and ended the slavocracy that had existed before the founding of the Republic.”

City leaders wrapped themselves in this holiday last Saturday, Krochmal continued, even as they continue to ignore all forms of racism in our community.

“The new mayor did not denounce the racist appeals that were made during her campaign,” he said, referring to Parker’s Black mayoral opponent, Deborah Peoples, who was mischaracterized as a Black Lives Matter terrorist and Muslim. “The city has not taken up [councilmember] Chris Nettles’ call to push for a date for Aaron Dean’s trial” for the shooting of Atatiana Jefferson.

Republic state legislators and Gov. Greg Abbott recently enacted a law that restricts how racism can be discussed in public schools. The bill, which was similar to other bills proposed in conservative Southern states, is widely viewed as an attempt to whitewash American history.

“There is this terrible irony that this federal holiday is being created and state and local officials are celebrating at the very moment that they are seeking to curtail a frank discussion of race and racism in America’s past,” Krochmal said.